SPECIAL REPORT – On Saturday I witnessed one of the largest peaceful marches in Washington, D.C. in a long time. Tens of thousands of exuberant Trump flag-waving supporters blasting music gathered peacefully in the nation’s capital to support the president and protest illegal or questionable vote-counting in key states.

They came from as far as Florida and New York, the Carolinas, and elsewhere. But as soon as the peaceful pro-Trump rallies ended and night fell, the leftist terror began.

The festive, but orderly, Trump crowd first gathered at Freedom Plaza near the White House for music and speeches, before walking toward down Pennsylvania Ave to the Capitol and Supreme Court. Standing on the sidelines it seemed the mass of walking, flag-waving Trump supporters would never end. 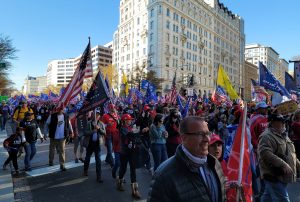 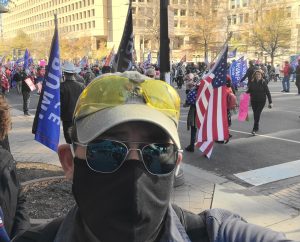 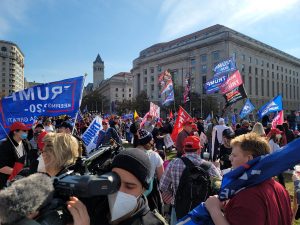 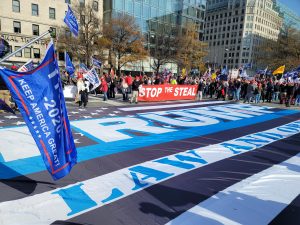 At one point the president’s motorcade drove by and Trump waved to his supporters.

While news reports cited sporadic incidents, I walked the entire route and was present the entire time. I did not witness one incident of violence. And only an occasional individual pro-Biden individual making vulgar gestures or comments.

Yet, as soon as crowds dispersed and darkness descended, so did the violent leftist mob intent on chaos. At about 4:30 p.m. as Trump supporters went home or to their hotels, I saw a small but angry black-clad group of a couple of hundred marching west down I Street, NW, apparently toward BLM Plaza.

They had a large sign that said “PUNCH MAGA IN THE FACE,” and other signs such as “Refuse Fascism,” showing them to be BLM and Antifa. They were clearly intent on violence. 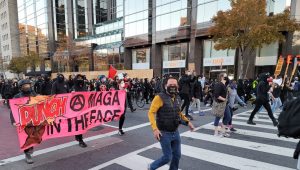 Police vehicles with lights flashing followed them down the street. It didn’t take long though for the Antifa-instigated violence and chaos to erupt. Only after the massive Trump crowds had dissipated — and only small groups of Trump supporters remained downtown peacefully eating dinner outdoors or walking the streets — did the cowardly leftist terror attacks began.

And yes, I’m being very clear — these mobs aren’t protestors or even rioters — they are violent terrorists, targeting and violently attacking innocent people in the streets of our capital for political reasons.

WARNING: EXPLICIT LANGUAGE IN THE VIDEOS BELOW

That is the textbook definition of “terrorism.”

Click the “Next page” button below to see how bad it got on the ground with leftists savagely attacking Trump supporters.

we need to beat them into submission

They protest against Fashism yet they act exactly like what the protest against , Fashists . Hitler’s Brown shirts behaved much the same . No one is allowed an opinion unless it goes along with their own .

The Left is the scourge of freedom and decency. The US was brought to fruition ‘under God’ so the left has a formidable adversary while the right has an awesome ‘General’.

Joe PANDER Biden mentioned it today and Yes..he Blamed WHITE SUPREMACY too! Peaceful White folks getting attacked by violent Blacks over and over Saturday and THAT POS had the Gaul to Mention f*cking White supremacy.Could you Ever Imagine him saying ANYTHING about Black Racism..That d-bag Never would ,Freaking Wet noodle punk

[…] one event, which I was an observer, black-clad far-left rioters attacked peaceful pro-Trump supporters as they dined in the city long […]

[…] one event, which I was an observer, black-clad far-left rioters attacked peaceful pro-Trump supporters as they dined in the city long […]