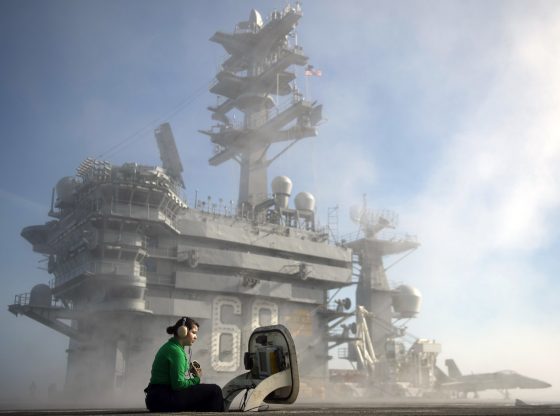 Last week the Pentagon announced it would be sending the supercarrier USS Nimitz back home after its long, ten-month deployment to the U.S. Central Command region near Iran. The move to send the strike force home was reportedly a “de-escalatory signal” intended to avoid an accidental crisis with Iran prior to the January 20 inauguration.

In recent days and weeks, the U.S. has openly deployed strategic assets, including, as I noted, massive cruise missile submarines and B-52 bombers, to the region as a message to the Iranian terror leaders amidst intelligence of potentially imminent attacks from Iran.

These shows of force were intended to ensure the regime understood the repercussions of any retaliatory attacks against U.S. targets on the one-year anniversary of the U.S. drone strike on Iranian Quds Force commander, Qasem Soleimani.

Tensions are extremely high. As I reported, Israel is also openly deploying a submarine to the area to warn Iran of retaliating for its alleged involvement in the recent targeted killing of Iran’s nuclear weapons research chief.

It was therefore surprising that the Pentagon appeared to suddenly send a conflicting signal when it announced Nimitz would be going home. According to The New York Times, that decision was made over the objections of top military advisers.

However, now the Defense Department has announced that order has been reversed due to threats from the Iranian Mullahs against President Trump and other U.S. military leaders made on the January 3 anniversary of the Soleimani strike.

“Do not presume that someone, as the president of America, who appeared as a murderer or ordered a murder, may be immune from justice being carried out. Never,” the head of Iran’s judiciary, Ebrahim Raisi, said at a gathering to commemorate the anniversary, reported the New York Post.

In response, acting Secretary of Defense (SECDEF) Chris Miller said in the statement:

Due to the recent threats issued by Iranian leaders against President Trump and other U.S. government officials, I have ordered the USS Nimitz (CVN-68) to halt its routine redeployment. USS Nimitz will now remain on station in the U.S. Central Command area of operations. No one should doubt the resolve of the United States of America.

Well done, and well said — acting SECDEF Miller. But maybe we should not have pulled the Nimitz in the first place.

HOMELESS-SECURITY had better look very closely at their hole-card.the people of the united states will not accept a two level response with antifa and the real-trump supporters..