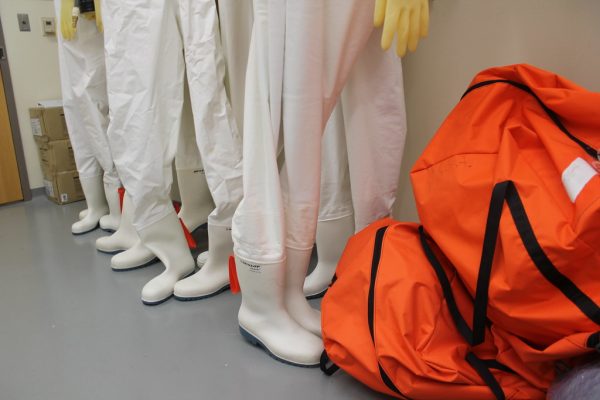 As I have written about several times since the Wuhan Coronavirus first exploded on the scene in early 2020, U.S. intelligence now sees a ‘growing body of evidence’ that the virus leaked from a Biolab in Wuhan, China. That lab, China’s first Level 4 Biosafety Lab (BSL-4) at the Wuhan Institute of Virology, studied the world’s most dangerous pathogens.

Based on the massive Chinese cover-up, destruction of evidence, attempts to shift blame, my understanding of Chinese bioweapons and biodefense research, plus the proximity of the BSL-4 lab, I long surmised that an accidental leak was the most likely cause of this pandemic.

Now, the U.S. deputy national security adviser, Matthew Pottinger has told British parliamentarians, according to the Daily Mail that: “There is a growing body of evidence that the lab is likely the most credible source of the virus. Even establishment figures in Beijing have openly dismissed the wet market story.”

That shaky Chinese government cover story theory postulated that the virus originated in bats from a live animal market. But it is becoming more likely that it actually originated and leaked from the BSL-4 at the Wuhan Institute of Virology located just 11 miles away.

Pottinger reportedly claimed that the most credible theory is that the deadly pathogen originated in that lab and may have escaped through a ‘leak or an accident.’

As I reported last year, this lab was considered unreliable for various reasons. Some experts believed the level 4 clearance was granted prematurely. Meanwhile, U.S. State Department cables from 2018 showed that visiting U.S. officials were extremely concerned about its “serious shortage of appropriately trained technicians and investigators” along with its study of “SARS-like coronaviruses in bats.”

This latest revelation comes as a team of experts from the World Health Organization (WHO) prepare to fly to Wuhan to investigate the pandemic’s origins more than a year after it began. China’s strong influence over the WHO, and the months it spent destroying evidence and covering up the virus origins, makes any truth-seeking by the WHO now difficult, if not impossible, though.

However, Pottinger’s renewed confidence in the theory reportedly comes as a result of recent information the U.S. has received from a whistleblower from the Wuhan lab, noted the Daily Mail.

“I was told the U.S. have an ex-scientist from the laboratory in America at the moment,” said former Tory Party leader Iain Duncan Smith, who attended the Zoom meeting with Pottinger. Smith added, “I was led to believe this is how they have been able to stiffen up their position on how this outbreak originated.”

Hopefully, more evidence will be released soon, so the world can finally be assured of the Chinese regime’s critical role in launching this deadly pandemic.

[…] to my earlier piece on U.S. Deputy National Security Advisor Pottinger stating that a ‘growing body’ of […]

SO THE TRUTH FINALLY COMES OUT!!
Part of it anyway…..perfect timing to destroy our Presidential Election. Biden is best Bud’s with the Chinese…..what does that say.
CORRUPT, CORRUPT, CORRUPT
I am sure it will be linked to Obama & Hillary as well. The Russian Hoax had lost steam so the Pandemic was the next choice. INVESTIGATE!

Pelosi and one of her fellow democrats went to the Wuhan lab in 2019. I believe they brought the virus back with them. Then released it at a time they thought it would shut down the nation.

I think China exposed the world to the Covid virus deliberately….with the intention to destroy the world’s economy especially the USA….and to cause death and fear…China wants America on its knees, bowing to them for mercy…with the help of all the people in power that have been paid off By China , they are very close to accomplishing their goal…All Americans that betrayed their country for pay offs , deserve the death penalty….the crime is called TREASON….Biden and his family are at the top of the list….Obama, …The Clintons…Soros….the list goes on and on…..there are even some Republicans , like Paul Ryan…Jeff Sessions, possibly Romney, ….could be a lot more ….we will know soon enough…

You are right. Thanks for saving my time. Comparison GNP of China and the rest of top industrial countries as USA, is giving that away.

Trump has run out of time trying to get congress and the court system to do the right thing. It is not going to work! If he truly wants help fix what’s wrong he needs to invoke the Insurrection Act and declare martial law.

And most likely to avoid the civil war by it.

Fauci led us in the wrong direction, standing up for China and the WHO. He only made things worse.

Was there ever a serious question regarding the original source of this virus? In the northern hemisphere, it’s usually chilly in December, isn’t it? Not much question about that either, is there?

[…] security biosafety level 4 (BSL-4) biolab at the Wuhan Institute of Virology (WIV), which I have written about various […]

[…] news reporting on China’s biowarfare programs or potential links to COVID-19 blocked. Such as this, or this. Most recently, their censorship extended to even totally […]