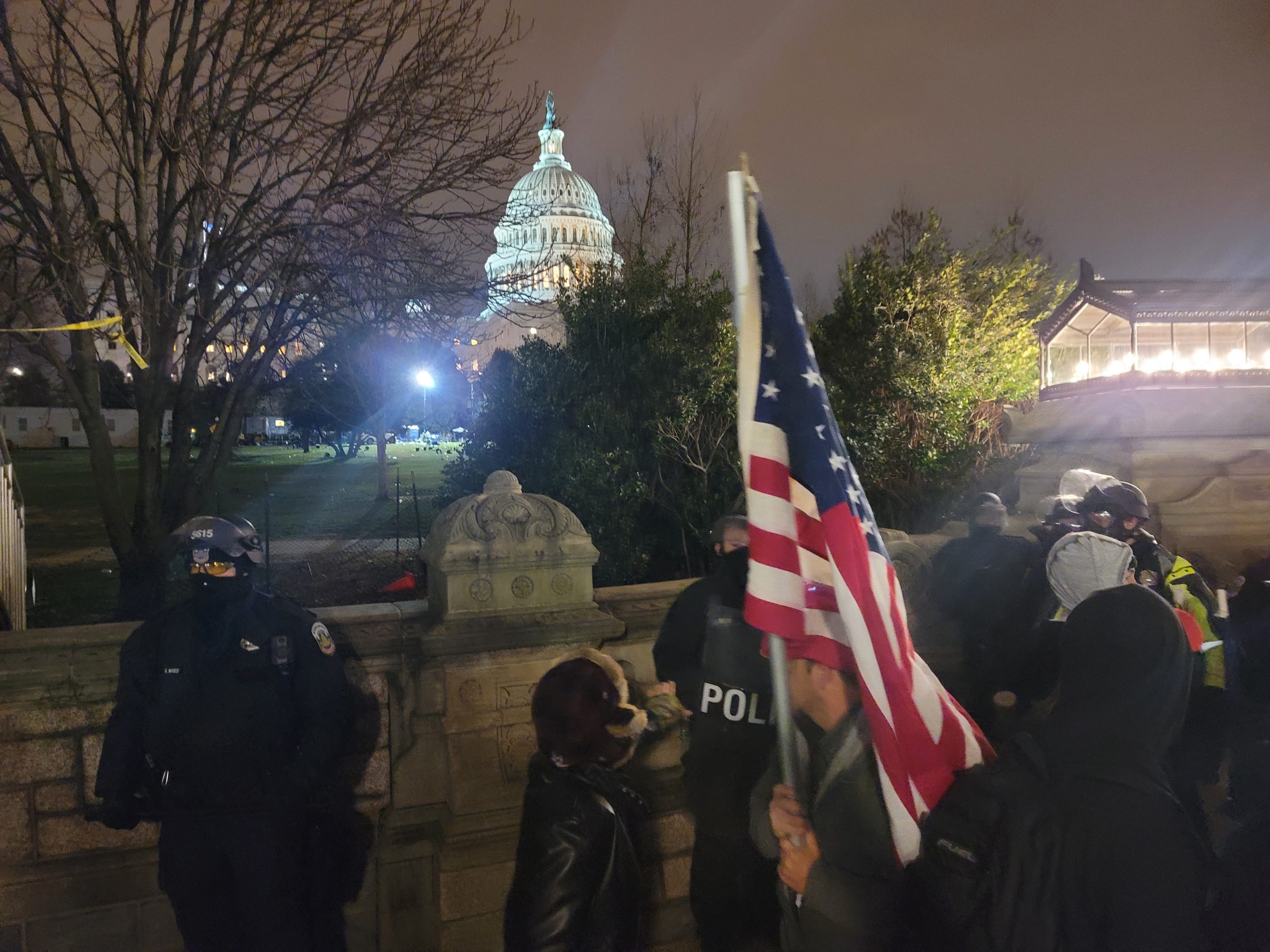 OPINION – On Wednesday, January 6, 2020, we witnessed something never seen before; Americans violently storming the Capitol building of the United States of America. This was an ugly sight.

I was at the Capitol yesterday as an observer. While the vast majority of tens of thousands pro-Trump protesters during the day were patriotic and peaceful – even if a bit frenzied – most of those several hundred who rushed onto the Capitol building were neither.

Some simply got caught up in the mob rush, but many were goons and criminals, and yes, ‘terrorists.’ No better than Antifa or BLM, or the #NotMyPresident rioters who disrupted Trump’s Inaugural four years ago. Some were likely infiltrated left-wing instigators. Hopefully, we will know more soon.

Whoever they were, they should be seen and treated as criminals. Arrested and prosecuted.

Conservatives, and others on the Right, cannot correctly bash the Left for violent rioting and attacking police and federal buildings, and then condone the same exact thing by their so-called ‘patriots.’

This increasing domestic political strife now also has its first official victim: 35-year-old Ashli Babbit, a 14-year Air Force veteran with multiple overseas tours. Sadly, she was shot by Capitol Police as she tried to storm through the police inside the Capitol building.

Earlier she had expressed strong opinions on social media about supporting the president and retweeted messages calling for Vice President Pence to resign and be charged with treason.

In September, according to the Washington Post, “she tweeted a picture… wearing a shirt that said, “We are Q,” referring to QAnon, the far-right” movement and conspiracy theory.

While saddened by her death, which must be investigated, she should not be turned into a martyr. She was a victim, but also a misguided perpetrator.

But we must also see the bigger picture. While nothing can justify this political violence against our elected leaders or ‘sacred’ political spaces, we must also acknowledge how the Left, over this past year, helped get us here.

This outrage at the Capitol was directly, if unintentionally, instigated by President Trump. However, it can also be seen as a culmination of many consecutive months of violent rioting and hateful rage-filled rhetoric by the Left. When mobs of violent rioters attack the police in Washington, DC, try to attack the White House, destroy property, burn cars, and buildings, loot businesses, with little or no penalty, the stage is set for worse violence.

The same applies to months of violent rioting in other major U.S. cities, toppling national monuments, and attacking federal buildings and law enforcement.

This was most notable in Seattle where violent leftists attacked the federal court building daily for months with impunity.

The entire country watched as leftist political violence was downplayed by the media for months and dismissed as “mostly peaceful,” while the violence continued without any real repercussions.

Leftist politicians enabled them and allowed them to attack federal property and law enforcement with barely a slap on the wrist. They did this while bashing the federal law enforcement sent in to protect them.

Those leftist politicos are as much to blame as President Trump or GOP politicians who enabled or helped instigate yesterday’s chaos against the Capitol building and police.

It is time that we put a stop to the political violence from all sides before it becomes far worse.

Facial recognition has determined that those leading the charge into the Capitol itself were Antifa members.

Where we go one, we go all.
QAnon is here. Forever.

This article says we shouldn’t turn the dead woman into a martyr but yet they did that with George Floyd. Funny how Trumpers never get any respect.

I agree Sir, although I did sort of chuckle watching 500+ Congress Critters shit their shorts on National TV. Peaceful Protests are a Right, but any illegal activity dismisses the message the Protester’s have. In the aftermath, the full Congess voted to certify the Election, just to show the Protesters what their lawlessness accomplished, a complete dismissal of the allegations of Election Malfeasance.
That the DC elite are woefully out of touch with vast sections of Americans, was fully displayed yesterday.

Let me start off by saying I do NOT condone violence. However the American People are angry with the Democrats lying, cheating and manipulating the election process. Schumer made the statement, “we take Georgia and we can change America”. Well Chuckie, I got news for you Americans do NOT want to change America.

What happened yesterday was sad but it is the Lexington and Concord of the next American Revolution. People are fed up with your socialism and lies. the majority of Americans know they have been cheated and will NOT accept Joe and the Ho as President

[…] day after the ugly event at the Capitol building, where hundreds of right-wing rioters stormed and ransacked the building, acting Secretary of Defense (SECDEF) Christopher Miller released a statement on […]

[…] words and sentiments are similar to what I wrote earlier yesterday when I condemned the rioters, saying they were no better than the far-left Antifa and BLM rioters, […]

[…] While it was a horrible, unacceptable criminal event — and I have strongly condemned it — I called it a criminal mob and riot with terroristic aspects — but not a coup or an […]

[…] It called the actions inside the Capitol “inconsistent with the rule of law,” but then said separately that — as a general rule — no one has a right to resort to “violence, sedition and insurrection.” In this way, I believe, they left the interpretation open and were treading a fine semantic and legal line, similar to what I have noted previously. […]

[…] It does not, however, seem to address how earlier violent rioting by the Left, in Washington, D.C. and across America for months, also strongly contributed to the current threat mix. I noted this issue earlier here. […]

[…] It does not, however, seem to address how earlier violent rioting by the Left, in Washington, D.C. and across America for months, also strongly contributed to the current threat mix. I noted this issue earlier here. […]

Total double standard. Where is the lefts outrage for all the violent destructive riots by ANTIFA and BLM IN Washington DC, Washington state, Portland Oregon, New York City, etc.

[…] week were Trump supporters or otherwise affiliated with so-called right-wing groups. However, as I predicted, at least one instigator there was from the Left. And he was just arrested on federal charges in […]

[…] week were Trump supporters or otherwise affiliated with so-called right-wing groups. However, as I predicted, at least one instigator there was from the Left. And he was just arrested on federal charges in […]

[…] domestic terrorism.” Few will argue with Wray’s assessment of it being criminal behavior, I called it that immediately after the riot. But was it “domestic […]

[…] Capitol riot, which I insisted (and still do) was neither a ‘coup’ nor an ‘insurrection,’ I did write that: “This outrage at the Capitol was directly, if unintentionally, instigated by President Trump.” […]

[…] as domestic terrorism.” Few will argue with Wray’s assessment of it being criminal behavior, I called it that immediately after the riot. But was it “domestic […]

[…] Riot on January 6, which I personally witnessed as a risk advisor to a foreign TV news crew, I wrote that the couple of hundred violent rioters acted outrageously, and criminally, just like the violent […]

[…] – I was at the Capitol on January 6 as a security advisor to a foreign media TV news crew. In a piece I wrote the next day, I condemned the violence while insisting it was a riot not a coup or […]

Did Trump Really Want to Lead an 'Armed Mob' to the Capitol on Jan. 6? - American Liberty News

[…] I was at the Capitol on January 6, leading a private security detail, not attending the event. I also wrote the very next day that while the riot was not a coup or an insurrection, it was “an ugly […]