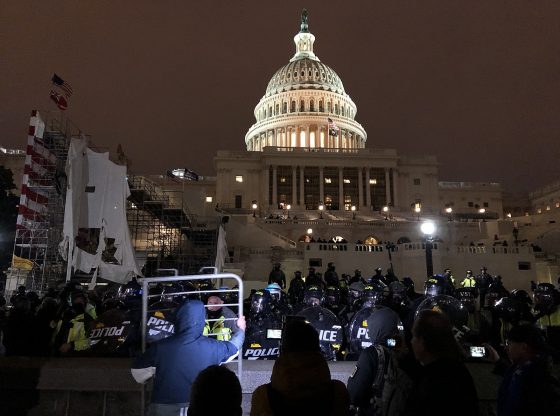 The day after the ugly event at the Capitol building, where hundreds of right-wing rioters stormed and ransacked the building, acting Secretary of Defense (SECDEF) Christopher Miller released a statement on behalf of the Department of Defense denouncing the violence and promising a ‘peaceful transition’ to the Joe Biden administration.

Of note, these rioters on Wednesday, which I strongly condemned earlier, were a tiny minority out of the tens of thousands of peaceful pro-Trump protesters in Washington, DC that day.

Miller was appointed acting SECDEF by President Trump after firing former SECDEF Mark Esper, and several other top Pentagon officials, as I wrote last month. Partisan critics called it a ‘purge,’ and hinted that there were nefarious motives behind the move.

This statement by the acting SECDEF should dispel any rumors or concerns about so-called ‘Trump loyalists’ at the Pentagon getting the military involved in the election, or in any way hindering the transition. It should also show that America’s most important institutions may be shaken, but remain firm.

Yesterday’s violence at the Capitol was reprehensible and contrary to the tenets of the United States Constitution. In the midst of this tragedy, I was proud of the professionalism of our Department of Defense personnel. I want to specifically recognize the service of the District of Columbia National Guard. They performed with honor, integrity, and alacrity to protect people and property from unlawful acts.

Our Republic may have been disrupted yesterday, but the resolve of our legislators to conduct the people’s business did not waver. Due to their efforts, supported by local and federal law enforcement and the National Guard, the attempts of those who tried to stop our government from functioning failed.

Miller went further in denouncing the actions of the violent rioters at the Capitol and concluded by assuring the Pentagon’s commitment to a ‘time-honored peaceful transition’ to the next president.

I strongly condemn these acts of violence against our democracy. I, and the people I lead in the Department of Defense, continue to perform our duties in accordance with our oath of office, and will execute the time-honored peaceful transition of power to President-elect Biden on January 20.

Everyone should take a deep breath, and rest assured that despite the chaos at the Capitol on Wednesday, and the continuing anger and divisions in America, the Pentagon and other federal agencies currently led by the Trump team will place ‘America First.’

Expect them all to be professional in their actions during the transition to the incoming Biden administration.

US Capitol ‘Siege’ – Not a Coup or Insurrection – but Criminal, Just Like Left’s Rioting
Trump Condemns Violence at US Capitol – Promises ‘Smooth, Orderly’ Transition

Isn’t this so nice of him? oooooo🤓

These were not patriots. It was a straight up set up. They were antifa. Try again. This time tell the truth.

RangerEdges is right on.
I just have a question, why didn’t all these politicians want some form of transparency to elucidate truth in elections?

Since Antifa and BLM are he only violent ones, and Trump supporters won’t be there, how could any violence be blamed on the Trump people?

The very best to come would be a blizzard blackout on Jan. 20, 2021, with high winds and sleet in the air. Sounds chillingly delightful.