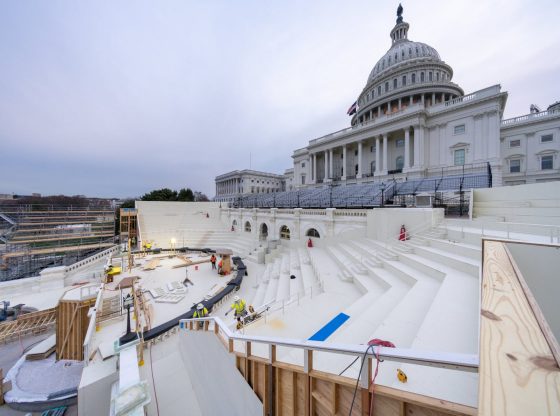 A day after President Trump’s acting secretary of defense issued a statement assuring the Pentagon’s stance condemning Wednesday riots at the Capitol and maintaining a peaceful transition to the Biden administration, the president tweeted today that he will not be attending President-elect Joe Biden’s inauguration.

Trump’s tweet, which was his second after a short Twitter ban, was brief with no further explanation. Trump simply stated, “To all of those who have asked, I will not be going to the Inauguration on January 20th.”

Earlier today, in his first tweet after the ban, Trump tweeted what appeared to be a pledge to his scores of millions of supporters that he would continue being a voice for them going forward. He said:

The 75,000,000 great American Patriots who voted for me, AMERICA FIRST, and MAKE AMERICA GREAT AGAIN, will have a GIANT VOICE long into the future. They will not be disrespected or treated unfairly in any way, shape or form!!!

According to Politico, Vice President Mike Pence is reportedly planning to attend the inauguration. One source said Pence’s attendance “was a much more difficult decision days ago, but less difficult now.” This, apparently in reference to the events on Wednesday.

While some are calling Trump‘s decision outrageous and unprecedented, he is not the first to avoid his successor’s inauguration. Three other former presidents have declined to attend, notes Politico, including some of the Founding Fathers: John Adams in 1801, John Quincy Adams in 1829 and Andrew Johnson in 1869.

Politico adds, “Former President Richard Nixon — who resigned in 1974 under threat of impeachment — was not present when President Gerald Ford was subsequently sworn-in at the White House.”

Nevertheless, other than that, all modern presidents in the 20th century through now, have done so. It is one of the nation’s most prominent public displays of its commitment to a peaceful transfer of power. It is still unclear what President Trump intends to do on that day.

In December, President-elect Joe Biden stated, according to Politico, “The protocol of the transfer of power, I think, is important. But it is totally his decision, and it’s of no personal consequence to me. But I do think it is for the country.”

Biden’s inauguration committee has announced plans for a scaled-down ceremony with virtual events to reduce the spread of Covid-19. Some of Trump’s more radical supporters have promised more chaos at the inauguration.

It is also unclear for now, how Trump’s decision to avoid the inaugural will impact these supporters, or the event itself.

Screw BRAIN DEAD biden!!! The election was about democrat power and getting rid of a TRUE American!! biden with dimetia and harris who couldn’t even win the primary in her own state, hat a couple of LOSERS!!!

Up yours Biden you will soon be horizontal and just a bad memory.

True they rigged this election big not my president ..

Maybe Joe won’t remember to show up, either. But that is okay , Ka-mala will take over and do what she has been told to do.

IT IS ONE THING TO ATTEND A LEGAL transition of power, this was not one of them, it was hijacked by the communist party, the democrats ,and the extra-stupid rino-republicrats. ALL WORKING IN UNISON FOR A MARXIST GOVERNMENT TAKE-OVER. PRESIDENT TRUMP WAS RIGHT NOT TO ATTEND THE FARCIAL TRANSFER.if dumbo-biden lasts a week it will be a miracle . HE IS SENILE–CROOKED–AND NOT IN CONTROL OF ANY FACILITIES THAT HE EVER HAD,if any.. pelousy will be in control before the smoke clears..

You said it all!

May be beijing biden and the Ho can hold their swearing at ceremony in his basement where he is nice and safe. These slime balls should send the POTUS away with gratefulness and thanksgiving in a grand ceremony to thank him for not overshadowing them. Must be hard to swallow when everyone would be cheering for the POTUS while only his rats and tail-wagging dogs from Silicon Vly would show to celebrate their oppression of American people.

So who is going to attend the 3rd world joe inaugural? Not many showed up for his rallies. There is no way in hell lying joe got 80 million legitimate votes.

WELL I CERTAINLY WON’T BE WATCHING —- NOT WHEN THE ONLY WAY BIDEN WON WAS BY CHEATING AND WITH THE HELP FROM ALL THE DEMS IN EACH DAMN STATE AND TO HEAD IT WAS SCHUMER AND PELSOI,. THE ALL BELONG IN JAIL / PRISON FOR TREASON.!!!!!

I will avoid looking upon his or Kami’s face from now on. Definitely no watching of a so-called inauguration! I will only listen to real news without their ugly faces. No lame stream media ever!

American politicians are more WORSE than the third world Country .Only behind CHINA & NORTH KOREA.

What if no one showed up?

If they hold it in the traditional location it will be the first time it will be attended by a majority anti-Biden crowd with disruption from beginning to end.

Why should President Trump legitimize the fraudulent election of Biden, who hid in his basement and wouldn’t reveal his policy positions on key issues? Did he decide not to campaign because he knew it wouldn’t be necessary and he would get all the fraudulent votes he needed without any effort?

of course that is why he slept in the basement with his dog. the fix was in at the poling booths, the post office, the mail drop boxes and the dog races.

NOW WHO IN THE HELL WOULD WANT TO ATTEND HIS SWEARING IN CIRCUS. NOW IF HE HAD DONE IT LEGALLY MAYBE —–BUT THE WAY THE DEMS DID IT —NO WAY IN HELL– I HOPE THEY ALL ROT THEY DESERVE NOTHING LESS

Since the election was fraudulent I do not blame President Trump not being there for the inauguration. I won’t and probably 75,000.000.00 probably won’t be there either. But watch the ANTIFA and BLM will be and will most likely cause riots and protests blaming it on the Republicans. Such a shame that the Democrats accomplished what they wanted “one way or another we will win.” Fraud is the “ONE WAY OR ANOTHER WE WILL WIN.” They want us to come together but they are doing everything to prevent it.

WHEN YOU HAVE A NEW PRESIDENT TO COME IN WITH VOTE FRAUD AND SUCH AND HE WENT ALONG WITH IT——– THAT SAYS PLENTY . HE CAN NEVER BE TRUSTED AND HE IS A LOOSE CANNON AND A A LIAR AND A CHEAT. HIS WHOLE HISTORY HAS BEEN LIES FROM THE TIME HE WENT TO CONGRESS.. HE IS A FAKE AND A FRAUD JUST LIKE HIS OLD BUDDY OBAMA. THE CORRUPTION LEAKS OUT EVERY TIME HE SPEAKS. AND I’M SUPPOSE TO TRUST HIM ——-TELL ME HOW—— HE IS A SLEAZE

Our Republic effectively Died on January 6th, 2021, with Congress’ certification of a Tainted Election.

RIP America, we had a good run.

🙏🏻🙏🏻🙏🏻4Justice upon all of these treasonous traitors

I, too, am not going to Biden’s inauguration. It’s fake and will be illegal till it gets fixed by the courts or law enforcement. If either has the guts.

Along with Trump, we were cheated and stabbed in the back.

Don’t ever forget that.

New years resolution, do not financially support anyone that votes or acts against your interest. Not one thin dime……….

He’s absolutely right in not going. This elections was a scam. If the Republican party keeps playing this charade, I will not support them anymore.

Sad that a president who accomplished so much for this countries people is leaving office in this manner rather than being cheered an thanked for his personal commitment to the American people and their dreams. A sad day indeed. History will exonerate him and applaud him with his due applause.

This pretended to the throne, that can even realize what day it is, will never be my President. I will watch how bad he screws this country up,
so badly , that voters on their hands and knees will be begging for Donald Trump to run for President in 2024