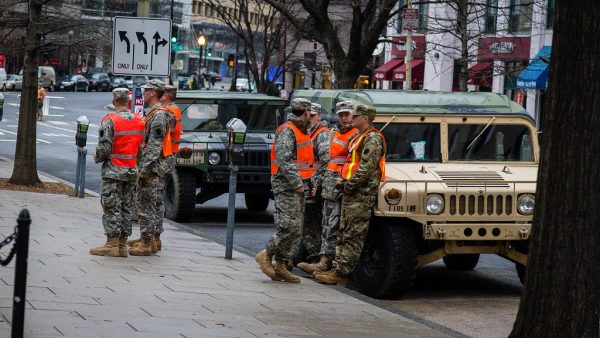 HOMELAND SECURITY – Following the violent riot in the U.S. Capitol on Jan. 6, the National Guard from several states have been mobilized and deployed to Washington, D.C. However, unlike prior deployments where the Guard was unarmed and used mostly for presence and crowd and traffic control, some of these troops are now armed and ready.

They will also be providing site security for the Capitol and in some areas of downtown D.C.

Approximately 6,200 National Guard troops have been flown into the nation’s capital from several nearby states. The troops from Pennsylvania, Maryland, New York and Virginia joined those from D.C. to help avoid a repeat of last week’s deadly chaos.

Additionally, a metal fence similar to the one previously erected around the White House now surrounds the Capitol grounds. Both National Guard troops and law enforcement officers are guarding the perimeter behind the fence.

Two Air Force veterans were killed and three others, including a Capitol Police officer, died in the storming of the Capitol by hundreds of rioters.

Some have labeled the riot — an ‘insurrection’ — that is a legal stretch. While it was a horrible, unacceptable criminal event — and I have strongly condemned it — I called it a criminal mob and riot with terroristic aspects — but not a coup or an insurrection.

I say ‘terroristic’ because some involved used physical violence for the express purpose of political intimidation, and that is part of the textbook definition of terrorism.

While all this can be debated, it is doubtful that the majority of this unarmed mob was intent on overthrowing the United States government.

But now things have heated up considerably. We have since seen many online calls for armed protesters going to D.C. in the days leading up to President-elect Joe Biden’s inauguration on Jan. 20, and a huge pro-Trump ‘Million Militia March’ on Inauguration Day.

“Calls for widespread protests on the days leading up to the inauguration of… Biden have been rampant online for weeks…and are scheduled to culminate with…a “Million Militia March” on Jan 20th”https://t.co/GNMvHl22tc

“REFUSE TO BE SILENCED,” said one online post cited by Alethea Group, calling for an “ARMED MARCH ON CAPITOL HILL & ALL STATE CAPITOLS” for Jan. 17, the last Sunday of Trump’s polarizing presidency. Another post called for action at “DC & All State Capitols” and was signed by “common folk who are tired of being tread upon” declares: “We were warned!”

Bringing illegal firearms into the district could significantly alter the dynamic from last week, where almost all the protestors were unarmed. Hence the Guard now being armed as well.

While some of the National Guard troops have now brought weapons and other tactical combat gear, they are mostly patrolling unarmed for now. That could quickly change.

A D.C. Guard spokesman said, according to MT, “The D.C. National Guard stands ready to support the incident command and is committed to supporting our local and federal agency partners.”

This appears to mean the troops are authorized to stand watch armed if needed. But that has not yet occurred, said the Guard spokesman. “We are not carrying weapons now, but any changes in posture will be determined by intel reports and risk assessment,” he said.

To Paul Crespo, how do you define ‘deadly’? There were hundreds of thousands Americans protesting peaceably exercising their constitutional right. A handful wen violent, and yes, that violence should not be condoned. Have you investigated whether they were not sent by beijing’s camp to divide the country and malign law abiding citizens? Do you know as a fact that the DC mayor didn’t send them? But where were you when BLM, antifas, and all those terrorists burning down cities? What did you coin them? Used to have a measure of respect for your reports. But you have outdone yourselves joining the thugs who stole the election by the most heinous immoral, unethical and conniving means known to the western civilization. BTW, what do you call the thugs taking occupancy in the WH on 1/20? Where is your moral compass or is it too big of a concept for you?

You can only suppress a free people so long. With millions of gun owners fearing for their freedoms being lost, what would you expect from them. Defund the police and down size our military which puts our personal and national defense in jeopardy. Stand with free Americans in saving America. People will die and I hope you are on our side. In the first Civil War, over 600,000 Americans lost their lives to free Black people. Now more than ever, we are willing to die to keep America Free.

Biden is not in danger, the whole Swamp is !

Everyone should close tweeter, FB, Instagram accounts, dump their stock if own any before they are worthless, stop buying from Amazon, buy direct from the seller/merchant don’t wait.

But not from “We the People”, the Patriots will clean House !

I love how nothing was done to BLM and Antifa for all their burning, distraction, beatings and killings. Let something happen that got out of hand by instigator brought i by Democrats, so they could get their president that didn’t win an elections into the white house. It’s so ridiculous the double standard. Whats saddest is how all media condemned the action when it’s not their job. It’s their job to objectively tell the story. Yet Antifa has been rioting and causing damage to government vehicles, homes, businesses and to include harming others and not one thing is done to them. I think the idiots in charge want a civil war. They have broken many laws themselves that has got us to this point.

When President Trump wanted to bring in armed National Guard last summer the democrats acted as if it was the worst thing ever, now they do it. Such disgusting hypocrites

Ugly, ugly inauguration on the horizon. Perhaps they should anoint this president in his basement where he campaigned.

And anoint him with water dipped from a used toilet.

The fact being that the Military was not just brought in for Biden’s innagurat6ion they were brought in to make sure nothing like happened Wednesday will happen again, in the Nations Capitol. Some are making this a 3rd World Country just like Russia has been trying since WWII, and Trump has done it in less than 4 years putting this USA on a road to War, within. I do suppose those people do not care about that Constitution that says what we are suppose to do, and not do, and just believe unfounded accusations to start something that will not be very pretty to anyone and nothing changes in any Civil War, except a lot of persons die and the Country comes under military rule, and it in most cases is much different than most think it will be. Now before the Demonstrations the White Supremist and radical Militias were given a free hand by Trump administration, thinking it would win him an election, which was poroven wrong in many ways.

I pray that any deployed US military person who is deployed to the Washington DC will use their own training and protect the real people and put into detention the true traitors of tho\is great country ..The Deep State and the Commie Democraps should be shot on site to stop this agression on the USA.

[…] up its ability to deploy additional National Guard (Guard) troops in Washington, D.C. I earlier wrote about the 6,200 Guard troops already flown into D.C. from nearby […]

I didn’t notice any buildings burned down and the people with glass cutters and Molotov cocktails as well as bombs were NOT TRUMP SUPPORTERS. Ask Nancy how they got into Capitol, as well as Mitch and Chuck. Setup to take down Trump.

Pelosi is a woman scorned and she is showing the power of a mad unhinged woman. She has been in power for far to long and needs a rest, perferably in her own home with her refrigerators or an old age home.Just get out of politics your giving the female politicians a bad name. Retire with your stacks of money and have a blast with OUR hard earned money.