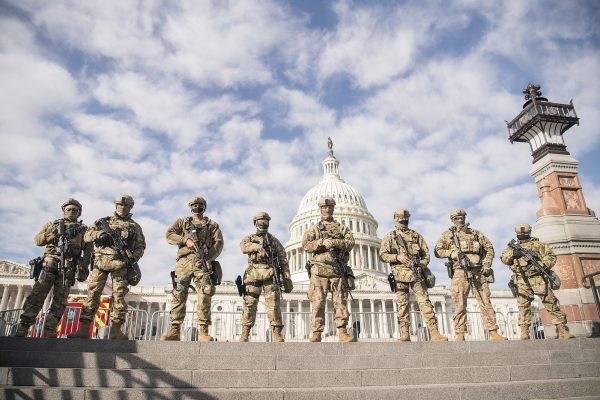 OPINION – Witnessing the massive overkill of security at the Biden Inauguration, and total lack of any regular people attending the event, was one of the most surreal experiences I have had. The fact that President Joe Biden made “unity” a major inaugural theme only made the event more jarring.

As I wrote earlier, the entire downtown area of our nation’s Capital was filled with unscalable 12-foot-high steel fencing topped with razor wire, barricades, and fortified checkpoints, manned by over 25,000 armed troops, and inaccessible to average citizens. Downtown DC was a fortress, and a ghost town.

In stark contrast, The New York Post noted that:

Abe Lincoln had fewer troops to defend Washington during the Civil War, even though the Confederate capital of Richmond was just down the road. LBJ used only about half as many troops to put down the 1968 riots that killed more than a dozen, injured hundreds and did property damage that lasted decades.

In addition to making one wonder how all this fear in any way promoted unity, the draconian security measures also made you ask – what was the expected threat?

One would think that Team Biden and the Democrats were expecting an army of tens of thousands of armed Confederates to invade Washington. Considering that only a few hundred unarmed rioters stormed the capitol on January 6th, that would be a big stretch. And Democrats know it.

But that’s not the point.

The aim here is to create the optics of a nation under threat from one of its two major parties. Democrats are aggressively promoting the false narrative that the Republican Party itself is the threat to America.

In doing so they are creating the real fear of a one-party dictatorship that they spent four years fanning the flames about President Trump and the GOP.  Except the real threat is coming from the Democrats.

Democrats no doubt hoped that the optics of this military-heavy presidential installation would convince ordinary Americans that the republic is in peril from the populist ferment that sent Donald Trump to the White House in 2016 and garnered more votes four years later than any GOP ticket, ever. It’s a peril that can only be addressed by, in James Comey’s lovely phrase, “burning down” the Republican Party.

Accusing Republican lawmakers of “sedition,” challenging the “loyalty” of National Guard troops, and impeaching President Trump for “inciting insurrection” – after he has peacefully left office – is all part of the political theater to make Republicans themselves be seen as the threat to democracy.

With Democrats wielding de-facto control of the White House and both Houses of Congress, and possible plans to pack the Supreme Court with Democrat Party loyalists, plus a fawning, complicit media, this partisan narrative and strategy becomes even more dangerous.

Beware of Democrats with total political control urging national unity at the end of a gun.

Same democrats who had troopd and put up walls with barbed wire to protect themselves from citizens are same ones who stopped protecting our southern border to protect our citizens.Wtf

Funny? NO. Self importance and abusive use of power, yes.

It shows the paranoia of the Democrats over possible backlash as a result of the fraudulent election results. The majority of American voters are disgusted with the underhanded domestic corruption in concert with foreign involvement in the November election. The current power structure in Congress as well as the White House is invalid.

The November election was the most secure election. Claims of widespread fraud were dismissed 60 times in various courts. There were real threats of violence after the failed insurrection attempt. All precautions were perfectly justified. The paranoia was the result of what happened on January 6. Haven’t you heard the saying ‘fool me once shame on you, fool me twice, shame on me?’

What mental institution were you confined in during the election?

So you are okay with the suppression of differing points of view and the squelching of free speech, attacking freedom of religion, attacking freedom to bear arms, open borders allowing millions of illegals to come in at the taxpayers expense, who are already suffering by losing their jobs due to the pandemic, higher taxes, allowing women athletes to be “erased” by transgender men competing against them, aiding our enemies, Iran and China with lucrative deals, calling people racist because they are white and judging them by the color of their skin, having thousands more jobs lost due to “climate change” paranoia, and using our military for a show of force. Force I might add that they refused to use while our cities burned and people were killed, but when they felt threatened, they put up walls and brought in the military. Hypocrites all. These are things that every tyrannical government in history has done. When I see them do something that actually is in the American peoples interest, maybe I will change my mind, but I won’t hold my breath.

After the treasonous assault on the Capitol on January 6, and with only 14 days to the inauguration, and considering the numerous threats that were being planned to sabotage the inauguration amid an unrelenting pandemic, the precautions taken were perfectly justified. Having succeeded in breaching the Capital once, the Trump goons would have loved to take a second crack at that sacred building. These criminals have no shame!

The need for a strong showing of safety and peace was necessary to protect those living in DC and all government official. It provided a message that America will not condone any type of coup against our democratic form of government. Amidst threats of violence against people in government, destruction of public property, presence of automatic weapons and worst of all, the evidence of hatred against all Americans that disagree with ideas promoted by supremists and radical whites compelled security agencies to rally around and safe guard our freedom

If your claim has any merit, where were they when antifa and blm tried to break thru to WH when President Trump was in office? Amusing how sweet talks and curse words can came out of the same mouth!!!

If the new president doesn’t trust the people, why should they trust him?

May be the other real reason besides intimidation is to HIDE the fact that possibly no more than a handful of the ardent admirers would bother to show up to cheer him on, recalling how enthusiastic they came to attend his many dynamic rallies before his handlers stole the election.

[…] Both the Mozilla Firefox and Chrome browsers would not open this article.  Microsoft Edge and Dissenter, the one put out by the GAB people opened it easily. Biden’s Militarized Inauguration Promoted Fear and Disunity […]

Watching videos of the “Installation,” of that Dementia riddled, doddering, corrupt old Pervert and Pathalogical Liar, looked more like a Military Junta’s installation of a Supreme Leader in some God forsaken Thirdworld Totalitarian Sh*thole, than a US President’s Inauguration.
Prepare to be “governed” my fellow Americans, out your wazoo!

Just proves that the Democrats just don’t get it, Biden was so afraid that he armed Washington.

The Guard was there to prevent anything like what happened on Jan 6th. Since nothing happened on Inauguration Day it seems to have worked.

Have to ask yourself as a leader, “if you have to bring in the military to protect you from your own citizens, are you really a leader, or a ruler”. Leaders have willing followers who stand up and help protect them, like Trump supporters. Rulers have to rely on the powerful people and institutions around them to maintain power.

While the National Guard is an honorable branch of our military, Harris/Biden used them to condition us to their overreaching power just as any other communist ruler would do.