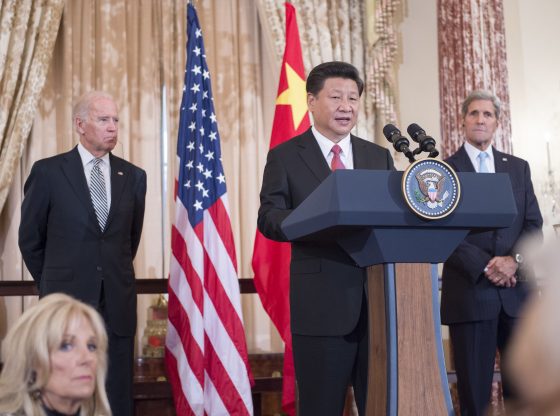 In a clear message to President Joe Biden, China sent at least 15 military aircraft into Taiwan’s air defense identification zone (ADIZ) on Sunday, January 24, just four days after Biden’s Inauguration. This was the highest number of Chinese military aircraft breaching Taiwan’s ADIZ in one day so far this year.

Previously China would send between one and three planes into Taiwan’s ADIZ, though much larger numbers have also been seen in recent months.

The day before that, on Saturday January 23, China launched upwards of 13 military aircraft into Taiwan’s ADIZ.

Per the Taiwanese (Republic of China) Ministry of Defense (ROC MOD), one Y-8 anti-submarine aircraft, four J-16 jet fighters and eight multi-engine long-range H-6k bombers were included in Saturday’s 13 aircraft incursion. Taiwan’s Air Force reportedly scrambled a total of 26 jet fighters to counter seven of these incursions in the southwest corner of its ADIZ, the Liberty Times reported.

The Sunday incursions with 15 aircraft, according to the ROC MOD, consisted of two Y-8s, SU-30 strike fighters, four J-16 fighters, six J-10 fighters, and one Y-8 reconnaissance plane. These incursions were all near the Pratas Islands.

“Airborne alert sorties had been tasked, radio warnings issued, and air defense missile systems deployed to monitor the activity,” the ROC MOD said in a statement.

Meanwhile, the USS Theodore Roosevelt carrier strike group entered the South China Sea on Saturday to promote “freedom of the seas,” the U.S. Indo-Pacific Command said in a statement.

“After sailing through these waters throughout my 30-year career, it’s great to be in the South China Sea again, conducting routine operations, promoting freedom of the seas, and reassuring allies and partners,” Rear Adm. Doug Verissimo, commander of the strike group, was quoted as saying by NBC News.

Joe Biden will now have to show how he will respond to an increasingly belligerent China, even as he has said at times prior to his election that he intends to ‘normalize’ relations with the communist regime, after President Trump’s more assertive and confrontational approach.

…and the president slept.

China is lining demented old Joe’s pockets and he’s a coward, won’t do anything.

Biden is trapped between a rock and a hard place. Hmmm, now what do I do???

He will take it sideways

And Joe said to XI, C’mon man, you know I’ve done all you asked so give me a break. Don’t expose, to my subjects, that Hunter and I colluded with you guys for money.
Take Taiwan but do it quietly XI. Okay? I’m on your side Man, so don’t forget okay!

this feckless idiot will be crapping his diaper! scary world outside of his basement…!

Why is this a “test” for Sleepy Joe? He is in China’s pocket. I’m sure he sees it as an opportunity. I’m sure he welcomes it. Joe Biden will see the downfall of America and the surging of China as the number one global power as mission accomplished.

Joe is bought and paid for by China. He will do what ever they say because he is corrupt and weak!

[…] since before he assumed office, but increasingly since January 20. As I have written, China has flown dozens of combat aircraft near America’s island ally – Taiwan – and announced a policy […]

[…] before he assumed office, but increasingly since January 20. As I have written, China has flown dozens of combat aircraft near America’s island ally – Taiwan – and announced a policy allowing […]

[…] before he assumed office, but increasingly since January 20. As I have written, China has flown dozens of combat aircraft near America’s island ally – Taiwan – and announced a policy allowing […]