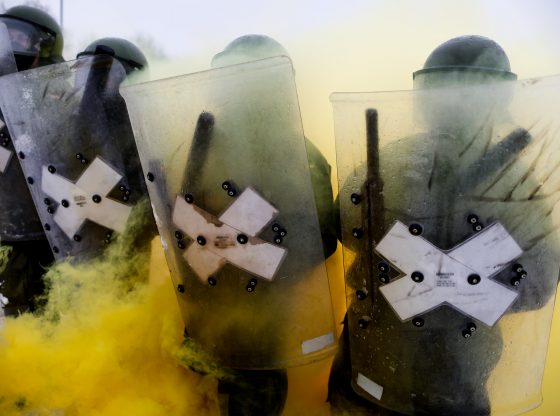 In a sign of growing unrest in Russia, thousands of opponents of Russian leader Vladimir Putin have taken to the streets in 100 towns and cities across Russia in record numbers this weekend. They were heeding a call from detained anti-Putin and anti-corruption activist Alexei Navalny to take to the streets to demand his release.

In August, Navalny was reportedly poisoned by Russian intelligence on a flight from Tomsk, Russia to Moscow. The poison was believed to have been a Novichok nerve agent and Navalny almost died in the failed assassination attempt.

He was later taken to a hospital in Berlin. His poisoning gained worldwide attention and condemnation.

Putin has denied Russian government involvement in the murder plot, and immediately detained the opposition leader upon his return to Russia after his medical recovery.

These demonstrations – the largest in years – may be more worrying to the Kremlin than prior protests. Writing in Foreign Policy, Vladislav Davidzon explains why Navalny has become such a major challenge to the “hybrid political regime that Putin has constructed.”

According to Davidzon, Putin’s regime “has allowed a great deal of space for all sorts of ambiguity and blowing off steam.” But, by attempting to embarrass and directly challenge Putin, Navalny is forcing the Kremlin “to make a decision about how to deal with him that it has no interest in making.”

Over 3,500 people were arrested during the protests, according to the monitoring group OVD Info—the most arrests the NGO had ever recorded in one day.

Although Russian President Vladimir Putin has successfully weathered unrest during his almost two decades in power, the protests come on the heels of other public displays of dissatisfaction: In the summer, thousands marched in Khabarovsk, in Russia’s Far East to protest the detention of regional governor Sergei Furgal before taking on an anti-Kremlin tone.

In order to deflect from the seriousness of this unrest, Russian authorities have accused the United States of interfering in the country and inciting the upheaval by publishing protest times and routes on the U.S. embassy website. While the embassy did post this information, as all U.S. embassies do (to inform its citizens to avoid these places and gatherings), the Russian government spun it very differently:

“What was that: a setup or an instruction?” Russian Foreign Ministry Spokeswoman Maria Zakharova told the Russian news agency TASS, adding that if the Russian embassy in Washington had done the same during U.S. protests “global hysteria” would ensue.

The attempt to blame the U.S. is clearly contrived, but the ongoing unrest in Russia is just another major foreign policy test for the incoming Biden administration. Team Biden has regularly promoted a hard line against Putin and Russia, while downplaying the far more significant China threat.

this feckless idiot must be crapping his diapers! it is a scary world outside of his basement!

There isn’t any difference between Putin arresting protestors and D.C. calling in 25,000 National Guards to prevent protests at an inauguration that had no attendees. Democrats rigged and election and our Supreme Court says OH Well?