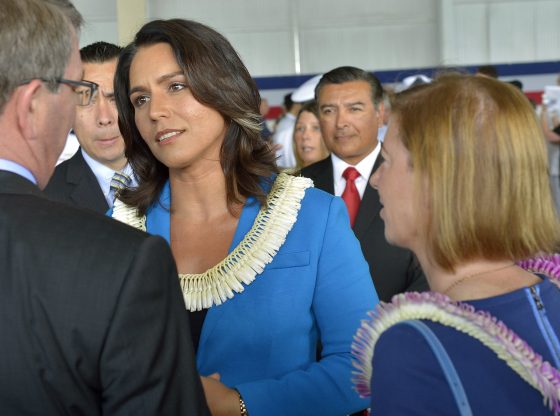 In a dramatic new video, former Democrat Presidential Candidate and ex-U.S. Representative from Hawaii, Tulsi Gabbard, warns of a ‘police state’ being planned by certain Democrat politicos and members of the national security and intelligence community. She is raising this alarm as certain elements in government and industry are using the January 6 Capitol riot as an excuse to enact draconian suppression tactics to quash political opponents.

I described this same concern here, where I noted how:

Accusing Republican lawmakers of “sedition,” challenging the “loyalty” of National Guard troops, and impeaching President Trump for “inciting insurrection” – after he has peacefully left office – is all part of the political theater to make Republicans themselves be seen as the threat to democracy.

The unprecedented censoring of conservative voices by social media platforms in the weeks prior to the election (as with Twitter and the Biden Hunter laptop story) – and more so in social media purge following January 6 – makes the danger even greater as Big Tech appears to be colluding with these politicians and elements of our national security state.

Chris Pandolfo notes in The Blaze how Democrat Congressmen and Senators who have long wanted to launch a ‘Domestic War or Terror’ against Americans in the U.S., are now using the January 6 Capitol Riot as their 9/11 pretext to accelerate their plans.

The events of Jan. 6 have been compared in the media to the Sept. 11, 2001, terrorist attacks, a comparison some have used to call for a “Domestic War on Terror,” demanding that the U.S. employ strategies here at home akin to those used against ISIS and al-Qaeda abroad. Rep. Schiff in 2019 introduced legislation that would create a federal domestic terrorism criminal statute. A similar bill sponsored by Sen. Dick Durbin (D-Ill.) would establish new offices in the Department of Homeland Security, the Department of Justice, and the FBI to investigate domestic terrorism in the U.S.

The mob who stormed the capitol to try to stop Congress from carrying out its constitutional responsibilities were behaving like domestic enemies of our country. But let us be clear, the John Brennan’s, Adam Schiffs and the oligarchs in Big Tech who are… pic.twitter.com/Q3VssCiz5l

Gabbard, a decorated Major in the National Guard with 17 years of service and deployments to Iraq and Kuwait, also calls on President Joe Biden and the Congress to defend American civil liberties against this frightening government overreach. She says:

President Biden, I call upon you & all of Congress from both parties to denounce efforts by Brennan & others to take away our civil liberties endowed to us by our Creator & guaranteed in our Constitution. If you don’t stand up to them now, then our country will be in great peril.

While denouncing the mob that stormed the Capitol, as I have, Gabbard correctly makes a significant distinction:

The mob who stormed the Capitol on Jan. 6 to try to stop Congress from carrying out its constitutional responsibilities were behaving like domestic enemies of our country. But let’s be clear, the John Brennans, Adam Schiffs and the oligarchs in Big Tech who are trying to undermine our constitutionally protected rights and turn our country into a police state with KGB-style surveillance are also domestic enemies — and much more powerful, and therefore dangerous, than the mob that stormed the Capitol.

I remember when then President Eisenhower warned against the Industrial/Military complex. Today it is the Spies/Congress/Silicone Valley cabal.

President Eisenhower, in his lifespan, did not know and would not believe that the American MSM, Big Tech and other Corporations/Wall-Street would also collude and support a political coup and subversion of our Constitution by the Democrat Party and their Chinese Communist (CCP) Cohorts!

A little late don’t you think?

BRAVO TULSI ! You are a true patriot and great American . Thank you for your service .

Tulsi Gabbard, Remember that name, send her money for her next election run. Tulsi for President for sure or Vice President next to Donald Trump…Go Tulsi Go!!!

If she believed ANYTHING she is saying she would switch parties. She’s just a liar like all Democrats.

very simply we are seeing history repeat! Big Tech controls information and their select political partners gain extreme power including the power to treat opposing thought as sedition. Happened in Germany in 1930s, Russia (Soviet Union) in 1940s and China in 1950. Look especially at the latter which is their Shining Star! One Child, gender abortion, re-education training, impeding employment (it is even a crime punished by prison to not stand properly for public playing of the national anthem!!).

This article appears to be sabotaged / Blocked (? By the New “Police State” she is warning about) to prevent this message from getting out?

All True!!! Everything that was said…ALL TRUE!!!
But when it’s all falling on deaf ears, what does it matter??!! Because, per the standard way of our corrupt POS government, Nothing Will Be Done!!!!!

First of all, there is no such thing as “CIVIL RIGHTS”, there are only constitutional rights. The left has for decades touted civil rights to take away the constitutional rights of Americans in selected instances. If we are all equal in the eyes of the law, the law must not consider race, gender, religion and especially sexual orientation. All matters can be settled by applying the law in respect to criminal activity. Discrimination, like it or not, is not a crime unless it involves a criminal act. As far as discrimination is concerned, let he who is without sin cast the first stone.