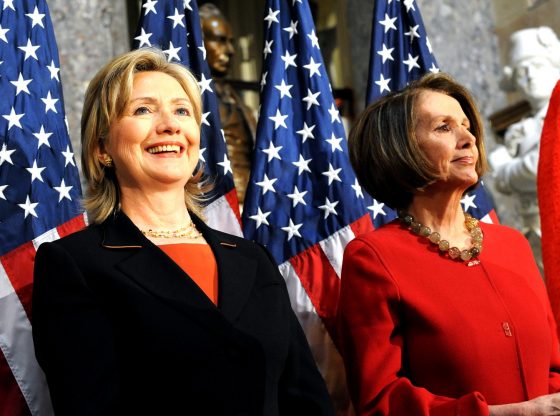 ANALYSIS – As Part of House Speaker Nancy Pelosi and her cohorts’ dangerous plan to suppress an entire political party, Pelosi has now claimed that: “The enemy is within the House of Representatives,” referring to her fellow Republican lawmakers. “We have members of Congress who want to bring guns on the floor and have threatened violence on other members of Congress,” she said.

Congressmen have long been allowed to carry firearms at the Capitol, but not on the House floor. But this rhetorical escalation by Pelosi cannot bode well for President Biden’s calls for ‘unity,’ nor for the future of our two-party system.

It also appears to intentionally mirror what former Democrat Presidential candidate Tulsi Gabbard recently warned about certain Democrat politics and ex members of the intelligence community, being ‘domestic enemies’ of the United States in their plot to use the Capitol riot as a pretext to create a ‘police state.’

As part of this ‘police state’ we have seen the massive militarization of security at the Capitol, which has now been extended for weeks afterwards. And now we are seeing calls for permanent security fencing surrounding the Capitol, ‘the People’s House,’ along with other significant security enhancements.

After apologizing for her agency’s “failings” in keeping the Congress secure on Jan. 6, the new Capitol Police chief, Yogananda Pittman, called for permanent fencing at the House and Senate.

“In light of recent events, I can unequivocally say that vast improvements to the physical security infrastructure must be made to include permanent fencing, and the availability of ready, back-up forces in close proximity to the Capitol,” Pittman said in a statement.

But lawmakers have a history of beating back calls for ringing Congress with a fence, writes Olivier Knox at the Washington Post ‘The Daily 202.’ They argue that this would send a message more akin to “Fortress Capitol” than “the People’s House.”

To her credit, D.C. Mayor Muriel E. Bowser, a vocal Democrat, immediately came out against the security recommendations, saying on Twitter “we will not accept extra troops or permanent fencing as a long-term fixture in DC.”

2/ When the time is right, the fencing around the White House and U.S. Capitol, just like the plywood we’ve seen on our businesses for too long, will be taken down.

“Visitors and D.C. residents alike love the unsecured grounds — the view of the National Mall, the park through which the Supreme Court can be seen,” notes Knox.

Meanwhile, the Architect of the Capitol notes on its website:

Since 1983, increased security measures have been put into effect, including the installation of barriers at vehicular entrances. However, the area still functions in many ways as a public park, and visitors are welcome to use the walks to tour the grounds.

Let’s hope that Pelosi’s planned ‘police state’ fails to come to fruition, and the Capitol remains ‘The People’s House.’

There is an “enemy within” our government, but he is the fraudulent, weak, socialist Screamin’ Joe Biden. He is the enemy of our morality and the values of our culture. His presidency will be a LONG 4 years.

truth speaks loud and clear and what is said so very true Richard.

I believe that Piglosi’s problem is that she has been given everything she wanted her entire life and she never ever was told NO ! Back when the Government was shut down and she was going to take friends on a European Vacation it was President Trump told her NO and took away her plane … since then she has had her panties in a wad and has done everything she could to take down the Best President the USA has had in my entire life !
I thin k her quiver is as empty as her pea brain !

Totally agree except I think it’s a flaxseed brain. It needs to disintegrate.

Pelosi Calls Fellow Republican Lawmakers the ‘Enemy Within’. By Medical Definition this shows Pelosi in a state of self- induced “Delusional Paranoia”, most likely caused by excessive “Bong” hits with L.A. Rappers attending Kamala’s Inauguration Party. She should of stuck with the Vodka!

Some republicans naively thought that the dems were after Trump because of Trump. Trump was just the pretext. Now that they got rid of Trump they will come after you, no matter what you do or say. It’s a war. Democrats need to be defeated way before the Russians or the Chinese. Just because we’ll never beat the Chinese and the Russians with the dems at the helm.

What makes you think they are even interested in a two party system.

Now that there is a fence around the capital, why don’t we make sure
the only way anyone gets out is in handcuffs

Pelosi is a disgusting b**ch and needs to go she causes nothing but division and misery. In all the years this woman has been in office she has done nothing for the people only lines her pockets. There is no reason anyone especially someone as awful as her should hold any office for this many years with the vile disgusting things she says.

I’ve been wondering why. Why do the Dems behave so ludicrously? They are busy challenging every convention. Canceling any counter culture. Shaming opposition. Destroying dissidents. They hate America. They want to dismantle and reconstruct her (was that an offensive pronoun?). Divided by countless identities. One party rule. One big government, authoritarian and collective. No doubt their marching orders come from Marxists.

Is Pelosi having a change of heart! Fence around the White House–How about a fence along our southern boarder. Gee thanks Nancy.

Well, Nancy, there you go again……If you’re so afraid of being there, why don’t you retire and go home where you will be safe and can live out the rest of your life like a fairy tale princess without all the worries and frustrations of Washington? Just sayin………..

The only enemies within are her and a handful of other democrats, she should be removed for even suggesting this nonsense.

The fact is Pelosi and Democrats are in full control, making laws and enslaving us all. Constitution has become irrelevant and Democrat leaders fiddle while America burns.
Biden, a pathological liar, installed as president and we abide by all his executive orders and call him president. Who is laughing now? Not me.

I guess Pelosi didn’t get the UNITY message. If this bag of waste doesn’t stop her offensive actions, we will never have peace (obviously her goal).

Pillosi is a puppet for the demons. The true ENEMY FROM WITHIN is Pillosi & her demon-crat followers. She & them are destroying WE THE PEOPLE.

I hope/pray the repubs will retake the house and senate in 2022 and have the balls or hooters to undo biden staff’s exec orders plus start impeachment hearings on numerous house and senate members for sedition.

Poor Muriel Bowser. She doesn’t understand that the military is not there for her; it’s there FOR HER! Arrests. Military tribunals. Convictions. Firing squads. Apply. Lather. Rinse. Repeat. It’s not so complicated, darling.