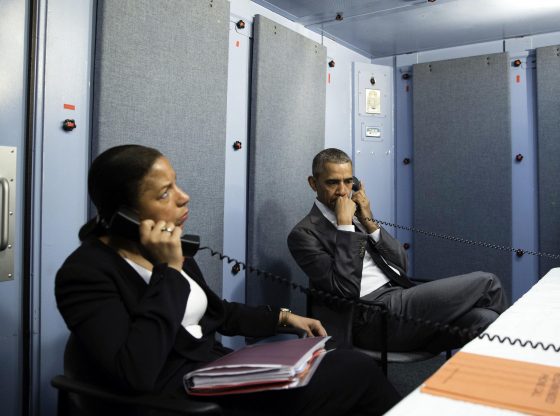 Analysis – As many questioned Joe Biden’s mental acuity in recent months, some argued that Kamala Harris would gain increasing influence and also be the stalking horse for the far left in Biden’s White House. However, it is now becoming clearer that the real power behind the throne may be Barack Hussein Obama, and his stalking horse is his former controversial National Security Advisor and Ambassador to the U.N – Susan Rice.

Biden has officially given Rice the title of director of the White House Domestic Policy Council, but Rice’s lack of domestic policy expertise makes that pure theater. On Fox News, former Acting Director of National Intelligence Richard Grenell called it “a joke” arguing that Rice is the one calling the shots in Washington today, not Joe Biden, or Kamala Harris.

Earlier this month, Grenell predicted Rice – infamous for her role in the Benghazi disaster, would be “the shadow president” and said she needed to be watched “very closely.”

Though Rice lacks experience in domestic policy, Grenell said “she’s run the national security portfolio and certainly has run the U.N. portfolio. She knows the State Department and certainly wants to be the secretary of state, so there’s no question that she’s running domestic and foreign policy.”

Rice also “is extremely excited” that Harris is preoccupied in the Senate as the deciding vote in a 50-50 split and “the shadow presidency of Susan Rice is front and center,” Grenell said. “There’s no question about that.”

Back in February 2020, Rice offensively slammed President Trump’s pick as acting Director of National Intelligence (DNI) Grenell, calling the openly gay former U.S. Ambassador to Germany a “hack and a shill,” adding that he is “one of the most nasty, dishonest people I’ve ever encountered.”

But Foreign Policy noted in July 2020, when Rice was being discussed as a potential Biden VP pick: “Rice also brings a lot of potential baggage, from her role in the 2012 Benghazi tragedy to a personality described by many as abrasive, a lack of political experience, and a shaky track record while helming the National Security Council (NSC).”

…clearly is not the Joe Biden of 10 years ago. He’s not even the Joe Biden of five years ago when it comes to policy issues. We saw him raise his hand during the Democratic primary for some really radical ideas.

The progressives have clearly taken over him … They wanted someone that they could control and Susan Rice being right there at the White House to be the shadow president is probably exactly where she wants to be, behind the scenes. And unchecked.

But who and whom is pulling her strings ?

I think we know the answer to that!
Been seeing lots of pictures of him!

Susan Rice is “one evil trannie “

The criminals are all coming back to the scene of the crime – the crime being the election of Barack Hussein Obama.

My thought was obama was behind it all but susan could very well be. I thought Obiden gave obama his third term is the reason I thought he was doing the coaching . We all know Obiden isn’t up to being in charge.

Susan Rice did not run for President, nor did anyone vote for her. Harris can overrule anything she tries to do. Okay folks, why did we elect someone that has already turned over his responsibilities to a known liar? I will not support anything that Susan Rice says or does and I don’t care who is behind her.

We can all see the figure behind the curtain! Trojan Horse Biden was the catalyst to get Heels up Harris in the White House…she was the first candidate to drop out because even her own party hated her and was polling at less than 1%… Biden will last through this year and then Ho Harris with use the 25th Amendment to take her “rightful place” as the President! The reason we all hear noise about Susan Rice is name recognition weather good or bad, she’ll be the lefty appointed to the Vice President! Hold onto your hats it’s going to a bumpy MF road!🤬

Is it news that Rice can do absolutely NOTHING unless good old barry bless it out of his vast intelligence and wisdom. He is so knowledgeable in everything that it is just like the sun rises from the west every morning. Must give her credit however for her ability to regurgitate the same line/lie at least 20 times on that one weekend, after 4 brave Americans were left to die serving the country in Benghazi when poor little barry necessarily retire to get his beauty sleep. It is a tremendous achievement to lie so consistently without missing a beat. Kudo to Rice.

Rice, Obama, and numerous others including the Clintons are members of the New World Order oligarchy. They have and still serve in “recasting the world in a new image” as the hundred year old Fabian Society slogan says. The New World Order works through several fronts so as to not be identified by one name. There is more than one group meeting per year at which key players gather in relative secrecy to discuss progress and lay out further plans of action with one such group being the Bilderbergers. Several other groups are more open in their meetings, like the Council on Foreign Relations, the climate change groups and the mutha of all, the U.N. just to name some.

C’mon man, Obama is in charge.

Rice doesn’t know how and when to sneeze or wipe her butts if poor little spineless coward barry in the shadow doesn’t tell her.