Home /Analysis, National Security/Former Secretary of Defense Mattis Warns US in Danger of ‘Destroying’ its Democracy from Within 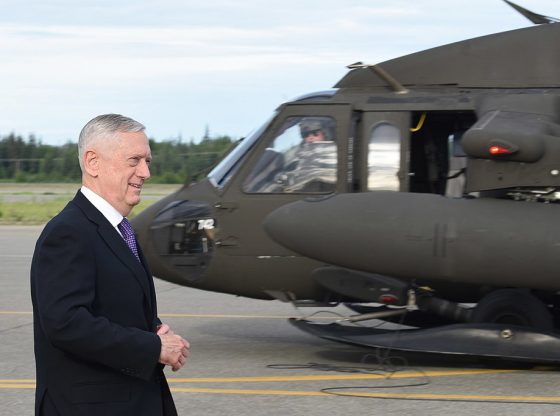 ANALYSIS – With President Joe Biden struggling to take the reins of government amid numerous dangers and crises, former Secretary of Defense and four-star Marine Corps General, Jim Mattis warns that the U.S. is in danger of ‘destroying’ its democracy from within. At a talk presented by the OSS Society on Thursday, Mattis said there are “internal threats right now” to the basic underpinnings of our democracy.

In his remarks he mentioned the Capitol riots and the mushrooming $27 trillion national debt.

At one point in his talk, according to Task & Purpose, Mattis specifically, if not by name, mentioned President Trump whom he served: “What we saw on Jan. 6 fomented by a sitting president…” Accusing Trump of fomenting the riot at the Capitol is fairly similar to “inciting” the riots, which the Democrats in the House are impeaching Trump for.

However, Mattis was apparently careful not to refer to the riots as an “insurrection” as the impeachment articles charge. As I have noted previously, Trump was irresponsible in his actions and rhetoric prior to the January 6 riot, but calling it an “insurrection,” or claiming President Trump deliberately incited it, is far from reality.

Almost half of the Senate agrees and calls the impeachment bogus and unconstitutional.

Mattis adds that these “internal problems” are as dangerous as any threats America has faced in its history.:

These are internal problems that I would classify with every bit as much gravity as the external problems and perhaps more so if you go back through our history and look at what this does in other nations and what it’s done to our nation when we went through periods like this.

Mattis is spot on in his concerns over the current internal threats to the Republic.

However, while Mattis mentions the national debt, the Capitol riot and Trump, he apparently failed to mention many months of nationwide violent riots, looting, arson and property destruction aimed at our law enforcement community, radical calls to defund the police, and calls for revolution by the far left.

Nor does he note the growing danger of the ‘police state’ being proposed by some Democrats and ex-members of the intelligence community, using the Capitol riot as a pretext, that former Democrat presidential candidate, Tulsi Gabbard is warning of, and I wrote about here.

These are all equally, if not more serious domestic threats to the Republic, and need to be understood and managed equally. Had Mattis mentioned these other dangers, his warning would carry much more weight with the majority of Americans.

However, his comments noting that democracy is not a default form of government is also spot on.

“How many of us realize we have no ordained right to exist, that every generation has had to fight for freedom in this, what George Washington in his first inaugural called an experiment?” Mattis said, according to Task & Purpose.

He also repeated the famous quote attributed to Ben Franklin of what kind of government had been formed after the Constitutional Convention — “A republic if you can keep it.”

“We don’t hear that anymore,” Mattis said. “And we’ve got to get back to that and understand how precious this is.”

Indeed, we do, General. But to be valid, that warning must apply to all sides of the political spectrum in America. Not just one.

Mattis is a Red Herring. Listen to his words. When he’s moving his mouth he’s generally lying.

You are absolutely correct. Why doesn’t this idiot Biden just let Trump handle the economy and foreign affairs? Instead of listening to the failed Obama administration people? At least Trump’s agenda, which he left for Biden to succeed, yet he is tearing it all down to make himself, along with Obama, one of the worst Presidents in history; yet, Jill lets them.

Obama supported Biden, knowing that he was going to take his place as the worst President in US history!

“In danger”? If we had an effective democracy now, Biden wouldn’t be occupying the presidency.

You know, it’s not the loss of democracy that concerns me, it’s the loss of this constitutional republic. Democracy has many inherent flaws, but this well crafted constitution has few ( no term limits being one ).

Mattis, another disgrace to American ideals and our republic.

They called him mad man mattis for a reason, he should be locked up in a mental institution..

Yeah, and you were one of the key players undermining our democracy. You knew the truth but denied it. Sounds a little like Judas doesn’t it? Spying on a campaign. Using the intelligence services to entrap opposing candidates and create falst stories. Spreading lies. Undermining a President you served. The list could go on, but this is enough that you should be in prison forever, right next to Comey, Brennen and a host of other traitors.

I don’t think this guy understands. There is no more republic. The republic was destroyed in Biden’s coup. There will never be another honest election. There is no more rule of law. We are ruled by an oligarchy of billionaires and bureaucrats with a president owned by the PRC.

We have been under a corporation instead of government since Grant left office .

Can anyone say a tyrannical government.

Just like Kruschev predicted in his famous “We Will Bury You” speech.

Mattis has a most valid point. The attack on Congress, our Constitution and democracy is in our face. Those that deny this are either complicit with the violent attempted coup. Supremists continue to plan more insurrections under the leadership of Miller and his puppet trump.

Can’t believe Mattis would spout such untrue information. The riots in Washington were a message that the people are not satisfied with representation. Now they have armed Washington with soldiers so they send a message of no unity but it’s there way like it or not and you wonder why the people are unhappy.

That’s the plan the Dems have had all along and it’s coming true. You steeple on the left will regret your choices when or if we become Cuba or Venezuela.

Mad Dog is part of our problem.

Mad Dog Mattis…a disloyal turncoat who just keeps on turning. Wonder where the needle will stop?

These generals are sold to the globalist cabal and are in their powerful positions only to do the globalists bid. His words are absolutely empty and not worthy to pay attention to. He most likely has a cozy position, earning a six figure income, while already in the first 10 days of the Biden admin, 50 thousand workers lost their jobs with a stroke of a pen. This bozo will lick Biden’s boots or whoever is in charge, even if it means rounding up his own country men and sending them to “fema camps”.

Well ….. although we where not there at the beginning of the Republic “if you can keep it”, it now looks like we may be there for the end of this Republic “you did not keep it”. This is sad. Who is to blame?

All of us …..Right, Left, Red, Blue. The negative forces have always been there. We have become so complacent in our great American life style, and numb to the loud noise of politics, we, I believe, took our eye off the importance of our elections and the process to elect our voice in our local government and Washington, DC. Your only voice in the outcome of this Republic.

Just look at what is running our country and what they have done to it. What is sad, we allowed them to do this to us. A politicians time in office should be one term, period. Why, because they can do to much damage to our country with a career in government.

Over the years the politicians have built themselves an empire and cash cow and now believing it belongs to them and corrupt American business.

As you can see, their decisions have little to do with you and a lot to do with their existence and continued power and control over you! .

If we have any chance of saving our Republic, we need to oust corruption and change the way we, the American people, do business with our government leaders.

Each new administration should be voted in and held legally responsible for a road map to improve America and American lives from the previous administration. A business and process improvement plan with meat on the bone and teeth should they deviate from it.

We don’t have a democracy, thank God, we have a Republic… If we can keep it, as Ben Franklin warned.

If we don’t do something to save OUR REPUBLIC we have no one to blame but us.

He’s right! There are threats from within! Those of us from the Constitution respecting side of the fence call those threats, Democrats, Liberals, MSM, Liars, Cheats, and Thieves, Traitors! And YES, sometimes, we even call them Generals!