A Real Military Coup over Election Fraud – In Burma

A Real Military Coup over Election Fraud – In Burma 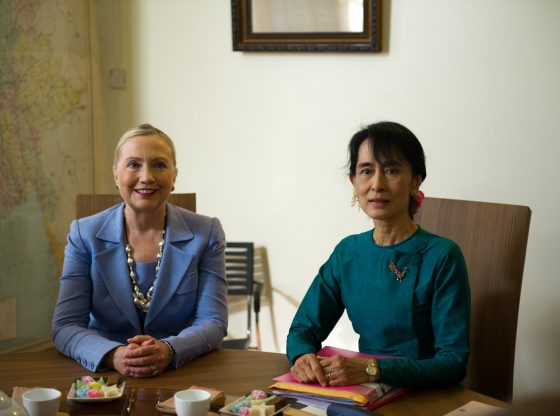 Despite all the reckless and over-wrought talk of a Trump ‘coup’ on January 6 over election fraud, President Biden is now reacting to a real military coup over the same election fraud issue. But that coup against the elected civilian government is in Myanmar, also known as Burma, in Southern Asia.

Troops launched raids against prominent politicians in the early hours of Monday, detaining de-facto leader Aung San Suu Kyi, President Win Myint and others. Tensions had been growing between the military and the civilian government, particularly since elections in November saw Aung San Suu Kyi’s National League for Democracy win a landslide victory.

The military made its move ahead of the first session of parliament since the election, due to be held this week. Lawmakers had been due to approve the next government. But now the military says it has taken control for one year, headed by commander-in-chief General Min Aung Hlaing, accusing the civilian leadership of election fraud.

As part of its takeover, the Burmese military has arrested a number of government officials and civic leaders. Team Biden and congressional lawmakers have expressed serious concern at the reports of the coup.

While Burma’s progress toward true democracy since its 2015 break from 50 years of military rule has been challenging and imperfect, that progress has now been totally disrupted, note democracy advocates.

We call on Burmese military leaders to release all government officials and civil society leaders and respect the will of the people of Burma as expressed in democratic elections on November 8. The United States stands with the people of Burma in their aspirations for democracy, freedom, peace, and development. The military must reverse these actions immediately.

The White House issued a stronger statement on Sunday, saying the Biden administration will “take action” if the military does not return control to the elected civilian government. White House Press Secretary Jen Psaki said:

The United States opposes any attempt to alter the outcome of recent elections or impede Myanmar’s democratic transition, and will take action against those responsible if these steps are not reversed.

What actions Team Biden may take, and whether the Burmese military will take the threats seriously, remain to be seen. But it is useful to use this event as an illustration of what a real military coup over election fraud looks like.

Stronger statement to warn the coup! What’s the old crook going to do? Yawn louder and scream more audibly ‘com’n man’ if barry couldn’t figure what’s next and crapping his pants in the shadow.

The same thing should have happened here in the USA ! Why our military did not do it is a mystery ! Biden and the Hoe are neither presidential material and the election was handed to them on a platter of FRAUD !
We need a real President and Donald J. Trump is exactly the fix ! Could be our military will reconsider and do the right thing !

All we need is for an idiot to try pushing another country around for what they have done here.

Afraid that will catch on here Biden ????

Who would have thought that the Burmese military is head and shoulders above the cowardly NWO American Military.

Due to media limitations, few know that most citizens are entitled to own and carry firearms for self-defense and that shops exist where firearms are sold. Burmese citizens have the right to own firearms but for about 60 years, licenses have been issued only to a privileged few, people of “dignity” and “good character.”

Historically, permits depended mostly on one’s ability to demonstrate a clear need to carry a weapon. It was a shall-issue law administered by a may-issue government. It is much like the U.S. Biden, Pelosi, Schumer, et al., dream of. Fortunately, the U.S. morphed in an opposite direction but it seems democrats wish we were more like Burma.

Maybe someone should give the burmese army free vacations in NV, AZ,PA …and DC

Well, they keep sending troops in to DC for absolutely no threat, so maybe there is a silver lining of hope in all of this! Nothing would send a thrill down my leg than seeing the frauds removed from the White house, in cuffs!