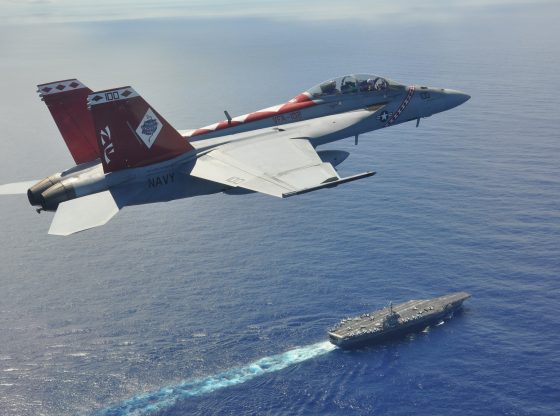 As reported earlier, President Joe Biden is facing increasing tests from China in his first two weeks in office, in the form of aggressive military actions in the South China Sea. This includes a large number of Chinese military aircraft entering Taiwan’s Air Defense Identification Zone (ADIZ) three days after his inauguration, a simulated air attack on the U.S. aircraft carrier Theodore Roosevelt nearby, and now even more Chinese military aircraft swarming the area.

At one point in the past two days, both U.S. and Chinese military aircraft were in the same area in Taiwan’s ADIZ, noted Taiwan’s Ministry of National Defense.

As The Drive reported:

“Airborne alert sorties had been tasked, radio warnings issues, and air defense missile systems deployed to monitor the activity,” Taiwan’s Ministry of Defense said in each case. Interestingly, it also said that an unspecified U.S. military ISR aircraft, along with two aerial refueling tankers, had also been operating somewhere within the ADIZ on Feb. 1 and another American ISR aircraft had been inside the zone on Jan. 31, all with the apparent consent of the Taiwanese military. The Jan. 31 notice appears to be the first time ever Taiwanese authorities have specifically noted the presence of American military aircraft inside the ADIZ.

…U.S. and Taiwanese military forces regularly engage with each other, including during training exercises on the island, but do so, generally, in a discreet manner, with few, if any public acknowledgments from either side. There has been a marked shift toward more public discussions about this cooperation in recent years, as former President Donald Trump’s Administration sought to expand the U.S. government’s relationship with authorities in Taipei.

The Drive adds: “This recent flurry of Chinese military aircraft sorties into this particular part of the South China Sea follows a notable uptick in such activity that first became apparent in the latter half of January.” This of course coincided with the days after President Joe Biden’s inauguration.

I have noted numerous times, President Trump had dramatically ramped up public support for our beleaguered Taiwanese ally and had approved a number of very significant arms deals for the Taiwanese military, including offensive missiles for first time in 40 years, and the sale of new F-16C/D Viper jet fighters, which Beijing had previously warned was a “red line” for them.

As such, this increasingly provocative behavior is clearly meant to test the resolve of the new Biden administration over its support for Taiwan, in contrast to Team Trump. It is also meant to show Beijing’s resolve in increasingly challenging the U.S. under the new administration.

China will make the same mistake as Imperial Japan, and attack US forces in the Pacific. possibly with nuclear weapons. They are convinced that Biden would not shoot back, and risk American cities.
We need to smuggle small arms and training materials to the people in China, as China smuggles drugs into the US via Mexico.
Wake up morons in Washington. China is at war with us. The China virus was a first strike to cripple our economy, which China knows won World War II.

They, China, weaker the world with the virus or did they help push socialism on us knowing they were setting up their puppet to win the erection oops shcmuck, election. Like obama left the world burning with the muzlims killing anyone they wanted, now the China puppet biden will help them take over the world and kill Hal of Americans and in slave the others, luckily I’ll be dead cause I bow to know man! WW3 if the military doesn’t put an end to this puppet regime part 2, or We the People don’t! IMO

China need not fire a shot, Dementia Joe will surrender as soon as China tells him to! Brush up on your Mandarin!

KEN worth
Reply to  Scotty

china owns 90% of our debt.,they could take the US down with out firing a shot. they are playing with us. one day they will be flying over California & not a Biden thing will be done.

“Come on, man! Just wait a little longer” says Joe….
All this stuff is just meant to take our eyes from one issue and put them onto another.

The real issue is we need to spread God’s word to our neighbor and everyone else and tell them to prepare for the Rapture (or their death). They will be in front of God one way or another.

The ccp is under attack by us , Taiwan and Australia, we have ceased mainland China and Taiwan will oversee China joining us in an alliance