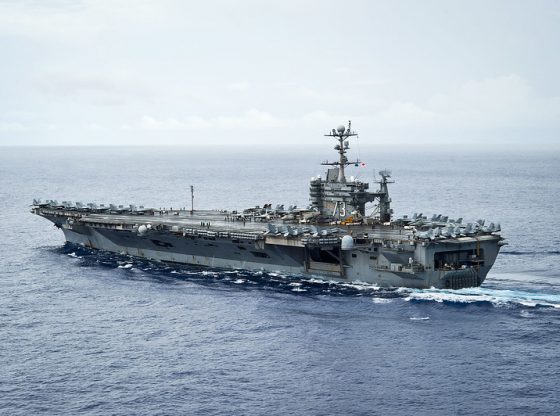 This is a serious escalation from the traditional norm of flying a pair of bombers near U.S. ships, as Russians and Chinese normally do—and the U.S. does to them as well to them.

As noted by Popular Mechanics (PopMech), “flying eight bombers—with pilots practicing orders to launch missiles—goes beyond trolling and enters the realm of a feasible military mission.”

PopMech adds, the “eight People’s Liberation Army Air Force H-6K bombers, accompanied by four J-16 fighters and a Y-8 anti-submarine warfare aircraft, took off from airfields on China’s central coast and headed south.” There they remained at least 250 nautical miles from the carrier to carry out their anti-carrier strike drills.

One observer Tweeted additional insights about the Chinese mission.

The Financial Times even reported that, “Pilots of H-6 bombers could be heard in cockpit conversations confirming orders for the simulated targeting and release of anti-ship missiles against the carrier.”

The 13 Chinese military aircraft involved in the incident, explains Kyle Mizokami, an established military writer, “represent an anti-carrier strike package. The eight H-6 bombers were the ‘shooters’ meant to target the Roosevelt.” He adds that: “The four J-16 fighters were escorts tasked with protecting the bombers.

The Y-8 anti-submarine aircraft may sound like a curious inclusion, but the unarmed sub hunter’s surface search radar would have made it a useful scout for locating the carrier strike group at sea.

The bombers would have practiced launching a missile like the YJ-12 anti-ship missile, a large anti-ship missile with a top speed of Mach 3 to 4 and a range of 248 miles. The Aviationist says each H-6 can carry up to six YJ-12 missiles, for a theoretical total of 48 anti-ship missiles on this mission alone.

That’s a lot of sea skimming anti-ship firepower from one strike package. However, an E-2D Hawkeye AWACs plane and a dozen F-18 Super Hornet strike fighters sent from the carrier would likely be able to detect and intercept the non-stealthy Chinese planes well beyond their missile standoff range.

The real challenges arise when these Chinese bombers are followed by waves of other attack aircraft and combined with barrages of land based anti-ship ballistic missiles, and even submarine launched cruise missiles.

Either way, this aggressive exercise is certainly another major test of the Biden Team’s resolve and stance toward China – especially following a decisive and forceful Trump administration.

China Joe what will your masters want you to do ???

China Joe Xiden is a TRAITOR and should be taken out and EXECUTED !
He will let China attack our Carrier Group and not do a damned thing about it !

James B Jacobs
Reply to  THOMAS

He’ll send them a few billion and an apology for whatever we did yo make them mad enough to attack us.

This could also be a staged BS set up from the ChiComs & the demmunists so that Joke Frauden could look tough against them somehow, some way.

What is Biden going to do about this? NOTHING????? Wake up Biden they are testing you!!!

I saw this coming.Trump was the first President in 30 yrs to not take us to war.Hold on to your butts!!Here we go

You can say whatever you want – but the proof is in the pudding – The Chinese may have feared Trump but they OWN Biden.

Th carrier continued sailing on and didn’t leave. That takes courage. “United States will continue to fly, sail and operate wherever international law allows, demonstrating resolve through our operational presence throughout the region.” If it was to test the Biden administration it didn’t provoke a confrontation. The South China sea is a sensitive area for the Chinese. The presence of a U.S. carrier is considered a provocation, but the fact that the carrier did not make a hasty retreat shows that she was not intimidated. What would Trump have done different?

Many of us would not have been born if Joe was POTUS when Pearl Harbor got hit.

He’s still not POTUS. He’s the Puppet of the US.

If these people are so poor and coming here for free everything……who bought them the customized t-shirts? What a bunch of BS. We are supposed to wear masks, but illegals can come in here and there is no demands or restrictions. Unbelieveable! The Puppet of the US and his camel need to go…..taking Piglosi and Shamer with them. TRUMP 2024!