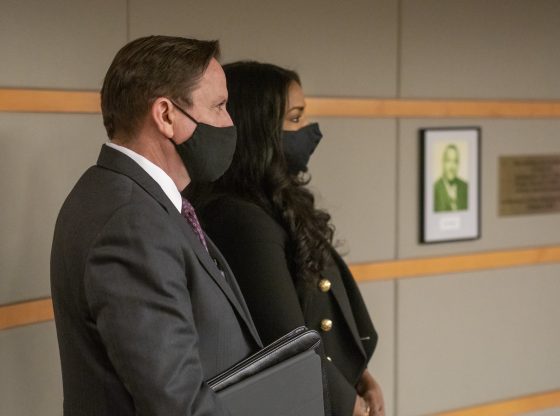 As Democrats shamelessly pursue their partisan, and likely unconstitutional, impeachment of a former U.S. president for allegedly ‘inciting an insurrection,’  President Joe Biden has appointed an avowed enemy of the police to be Deputy Spokesperson at the State Department.  In a September 2016 Facebook post, Jalina Porter said: “The largest threat to U.S. national security are U.S. cops.” 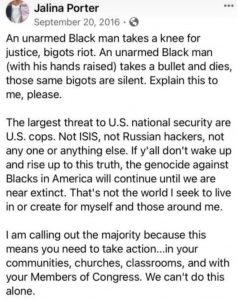 Not content with only being rhetorical, Porter added her sincere conviction that America’s cops were the largest threat to the United States, including all foreign threats. According to the The Washington Free Beacon she specified: “Not ISIS, not Russian hackers, not anyone or anything else.”

If ya’ll don’t wake up and rise up to this truth, the genocide against Blacks in America will continue until we are near extinct. That’s not the world I seek to live in or create for myself and those around me.

I am calling out the majority because this means you need to take action…in your communities, churches, classrooms, and with your Members of Congress…

At the time she wrote the post, Porter was working for the left-leaning Truman National Security Project, a nonprofit national security and foreign policy think tank that once employed Hunter Biden. And now she is the Deputy Spokesperson for the United States Department of State.

She does, however, bring other talents to the job. According to the Free Beacon, “Porter is also a former dancer for the NFL’s Oakland Raiders and the NBA’s Washington Wizards.”

The resurfaced comments could complicate the State Department’s messaging as it seeks to challenge Iran’s nuclear buildup, continue the fight against ISIS, and shape its response to the many ongoing national security threats posed by China, Russia, and the Islamic Republic.

How anyone with these views could be appointed to any part of the U.S. foreign or national security establishment is the big question. Whether Biden will keep her now that her outrageous remarks have surfaced is the next question.

All police should immediately stop servicing his neighborhood.

You mean “ her “ neighborhood and I concur.

Dumbocraps are the GREATEST threat to America. Especially NOW!

You are so right

You are right on with Piglosy. How do we get rid of her is the question? Can she be impeached? I don’t really know but it surely would be great if possible.

Criminals and those glorifying them or making excuses for their crimes are a threat to civilized society.She is a racist bitter person who has no business in government.

It’s all a proven fact that Cops kill a lot less Blacks then the Blacks do. So why don’t you put your head in a hole and stop enciting trouble and stop the lies.

LETS GET THIS STRAIGHT – I’LL TAKE THE POLICE OVER THE SCUM OF ANTIFA AND THE BLM THAT ARE WORKING FOR THE DEM LIKE HITLERS BROWN SHIRTS OR THE S S GROUP.

In this nitwit’s city, that would be the District of Columbia Police Department and they closely collaborate with the Capitol Police and the Secret Service. Perhaps if she grew up…

Democrats always bashing the police yet first to call them when they’re scared like pelosi. Democrats are hypocrites and scum and I think they should all be sent to camps to be deprogrammed.

This one is past deprograming . Lobotomy might be her only chance.

Police are only a threat to to the despot government. Must weaken them before making major moves to completely take over. I stand with the Blue. Do not stand with Biden, the prostitute Harris and illegal activities of Democrats

You people haven`t realized this yet? We have already been taken over from within. Whoever heard of the catch and release of illegal aliens?
If they were treated as illegals they would have been deported long before this. We are feeding and housing 22 million of this slime.