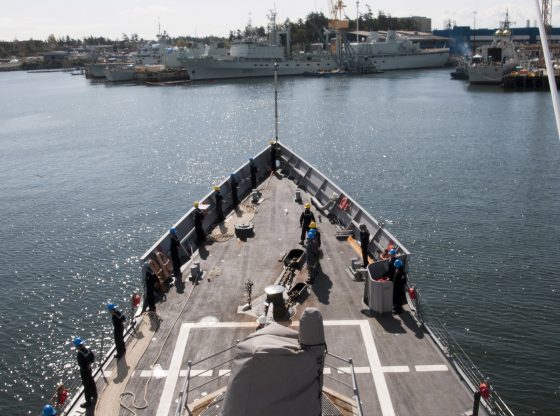 CHINA THREAT – One of President Trump’s most significant achievements was his forceful strategic response to the existential threat posed by communist China. As part of his administration’s efforts to counter China’s expansionism was deepening military ties with a host of allies including Taiwan, Australia and India, but especially with Great Britain and Japan. The latter is clearly on display now as the UK deploys its latest aircraft carrier, the HMS Queen Elizabeth.

The British Ministry of Defense (MOD) has announced that the Queen Elizabeth will be drilling with the Japanese Defense Force in the Spring.

US Naval Institute News reported U.K. Defense Secretary Ben Wallace said: “Japan and the U.K. have forged a close defense and security partnership that is being elevated to new heights this year when the U.K. Carrier Strike Group visits the Indo-Pacific,”

“We will take security and defense cooperation between Japan and the U.K. to a higher level,” Japanese Foreign Minister Toshimitsu Motegi said separately in a statement, according to Nikkei Asia.

Adding to this growing UK-Japanese defense cooperation is the deepening integration of U.S. and British naval forces. U.S. Marine Corps stealth F-35B vertical/short takeoff and landing (V/STOL) aircraft have been operating from British carriers, and last month the U.S. and U.K. formalized their own agreement to deploy together as part of Britain’s Carrier Strike Group (CSG) 21. Japan has also asked that MArine F-35Bs fly from their latest assault carrier.

.…In addition to the Wake Island Avengers, the strike group will include U.S. destroyer USS The Sullivans (DDG-68) along with Royal Navy escorts.

Under Trump, Japan, the UK, and the U.S. entered into a trilateral naval cooperation agreement in 2019. USNI News explained:

The U.S. Navy counts the Royal Navy and the JMSDF as two of its closest allies. U.S. ships forward-deployed to Japan routinely work with JMSDF ships, as do those on rotational deployments from the U.S., and Japan is operating much of the same equipment as the U.S. – combatants running the Aegis Combat System, the Standard Missile family of missiles, the E-2D Advanced Hawkeye – that can be stitched together to create a powerful network of sensors and shooters across the Pacific.

Hopefully, President Biden will see the extraordinary importance of these deepened trilateral military ties to counter China and will continue on the path laid out by President Trump.

Thereshould be no question, we MUST keep up and even increase our support with South Korea, Japan, the UK and any others who will join withus to stop China’s expansionism ! ! !

Hope they stay united ..We need more countries to be with us.