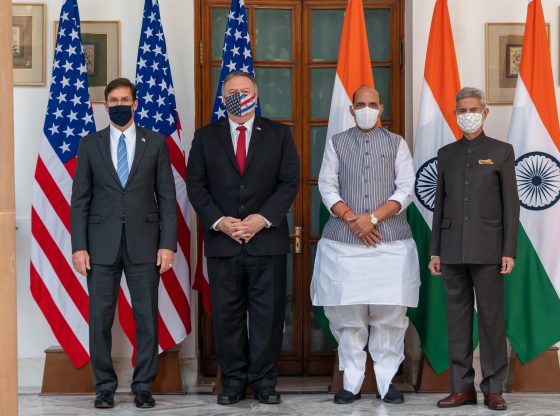 As part of deepening U.S.-Indian defense ties, 270 American soldiers will be training with their Indian Army counterparts for the next two weeks in India. Soldiers from the US Army’s 2nd Battalion, 3rd Infantry Regiment of 1-2 Striker Brigade Combat Team landed in Suratgarh, India on February 7th via a special aircraft.

U.S. troops then left for Mahajan Field Firing Range where the joint two-week training exercise will run from February 8-21. The training will take part in Rajasthan in the west along the Pakistani border.

This is the 16th edition of the ‘Yudh Abhyas’ (Hindi for ‘War Practice’) exercises, but the training is gaining heightened significance with the recent Indo-Chinese border conflict and sabre rattling from Pakistan. Like prior iterations – the current wargames will focus on counterterrorism and promote interoperability between the two forces, according to the Indian Army, and Hindustan Times.

The Indian soldiers taking part in the exercise belong to the 11th Battalion of Sapt Shakti Command of Jammu and Kashmir Rifles, said Indian Defense spokesperson, Lt Col Amitabh. He added: “The joint exercise is another step in the growing military cooperation between the two countries which shows the continued strengthening in Indo-US relations.”

The joint military exercise will enhance the level of defence cooperation between both armies which will also foster the bilateral relations between both nations and reiterate India’s key role as a key partner in the Indo-Pacific region.

As noted by The Diplomat, this joint exercise comes after a slew of other joint military operations in recent months. It:

…is the third time Indian and U.S. militaries have exercised together in the last four months, highlighting the growing depth of the bilateral defense relationship.

In November last year, the United States’ and Indian naval ships – along with those of Australia’s and Japan’s – participated in the annual Malabar exercise in the Indian Ocean, following which the anti-submarine warfare Sea Dragon exercise in Guam also saw the participation of the two (along with, again, Australia and Japan, but also Canada) last month.

Along with single-service exercises as well as a one involving special forces from both countries, the two also held a first ever tri-service exercise, Tiger Triumph, in November 2019.

However, as The Diplomat continues:

While it is true that regular military-to-military engagements between India and the United States have significantly enhanced interoperability between forces, the two sides still have some way to go before they can function as a combined force in a regional contingency.

This problem, The Diplomat notes, is due to a “still-considerable gap in training, doctrines, and platforms and weapon systems operated by both sides,” but perhaps just as much, also due to the lingering mistrust by Indian military officers toward the United States.

According to a controversial study published by the Stimson Center in September of last year, a former senior Defense Intelligence Agency (DIA) officer Col. David Smith noted that “a high level of mistrust (and thinly veiled hostility) about the United States generally persists in all three groups [senior, senior mid-level, and junior mid-level] of Indian officers.”

This ‘hostility’ is grounded, in part, in Cold War views, when India was officially non-aligned but tilted toward the USSR, and the U.S. embraced Pakistan. For decades India followed Soviet military models and tactics and bought Soviet military hardware, and the military focus has always been on Pakistan. The study added that:

The intensity of Indian Army hostility toward Pakistan increased in every decade of the study. Although China is perceived as India’s major long-term security threat, there is reluctance to characterize it as an enemy.

That study was based on observations of U.S. military personnel assigned to India’s Defense Services Staff College (DSSC) in Wellington over the past several years. However, it is unknown how current or accurate these views are now – especially in light of the very recent deadly Chinese border clashes and ramped up Chinese threat.

Nevertheless, overcoming any residual mistrust, and ensuring the Indian military understands the growing threat post by China, and that the U.S. is a long-term ally in all respects, should go a long way toward strengthening these vital Indo-U.S. defense ties.

Many Indians don’t trust us????? Give me a break, after living and working around them, I don’t trust most Indians and I generally don’t like them either. My opinion is based on experience. Now I find they don’t trust us. Good, let’s just quit investing in their well overpopulated failure of a country with its caste system, quit importing from them including and especially, medicines and quit allowing them to flood into the US in droves. And mostly, let’s keep them from calling our phones with their scams.

We can’t trust our Commander in Chief why would anyone else trust us . 48 years on the government tit and still stealing !!