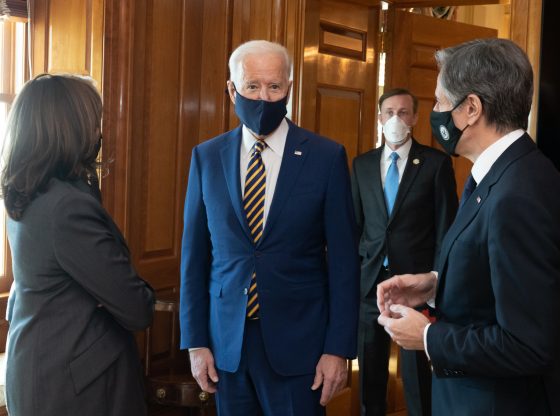 After President Biden seemed to state publicly that he would take the unprecedented step to ban former President Trump from receiving intelligence briefings, the White House has backtracked on Biden’s words. Press Secretary Jen Psaki said in a statement Saturday the president was merely ‘expressing his concern’ and will leave the final decision to his intelligence team.

In an interview with CBS Evening News Friday night, Biden said he did not think Trump should receive the briefings citing the ex-president’s ‘erratic behavior,’ adding that he would ‘rather not speculate out loud’ what his worst fear is if Trump is given access but said there is ‘no need’ for Trump to have them.

Pres. Biden sits down with @NorahODonnell for his first network interview since taking office.

Hear more from the president about his plans for tackling the coronavirus pandemic ahead of the Super Bowl, only on @CBS. pic.twitter.com/zg2rQhUeQo

It is a long-standing tradition for former presidents to be granted routine intelligence briefings and access to classified information once they leave office to allow them to continue to support U.S. interests. It is also a sign of respect and continuity between the current and former president.

While not at the highest classification levels reserved for the current President, the intelligence briefings are still delivered by current intelligence officers.

No other President has ever denied that tradition, but the decision does lie with the current Commander-in-Chief. And, of course, Trump left the White House breaking with traditions and is currently being impeached, unconstitutionally many Senators argue, over his alleged complicity in the Capitol riots.

In a Washington Post column published last month, Susan M. Gordon, who served as principal deputy director of national intelligence until 2019 under Trump, urged Biden to cut off Trump’s access to the sensitive briefings, arguing that his “significant business entanglements that involve foreign entities,” and his plans to remain politically active, made him “unusually vulnerable to bad actors with ill intent.”

Many of these issues, however, could also have been used against former President Bill Clinton, and his controversial multi-million dollar global financial entanglements and fundraising, all while his wife Hillary also ran for President. It appears highly selective to now suddenly use them against Trump.

Either way, to avoid personalizing the issue, as Biden seemed to do, backtrack on his remarks, or simply to pass the buck to his national security team, Psaki stated, according to the Washington Post:

It is unclear when a final decision on the matter will be reached, and the Office of the Director of National Intelligence (ODNI) has not commented on the decision.

Biden is not President !

this guy is not even there! his look is one of total empty head!! expect them to be pushing him in a wheelchair soon and then hide him out of sight from the masses. look at the expressions on the people around him- they can’t even believe it!!

Joe do not strain the brain. You have many assistants that can make decisions for you.
If not your press secretary can circle back just like she did in her swimming days – circle swim while training !!!!!

Biden’s totally intimidated by Trump. Using Trump like most prior presidents have used their predecessors would be unbearably intimidating for our mentally compromised figure head. He’d probably retreat to his basement and wait for the next show.

Safer with Trump, who is lucid than with Dementia Joe, who isn’t.

Biden is a National Security Risk! He is not fit to be in office and i s a danger to this country! This ass was forced on we the people and we are all praying him and that phoney Kamala will be tossed on an their butts! They are guilty of massive fraud, treason, and they will not escape justice! HE IS NOT OUR PRESIDENT! DONALD J TRUMP IS!

I I personally do not think President Biden who has Obama under his wing keeps telling them what to do neither one of them have the right to keep President Trump from intelligence briefing. It is given to all presidents after they exit the office. as far as I’m concerned President Trump did an excellent job while he was in office as our president. Is basically did just about everything he promised during his campaign unlike some other presidents we will not mention. He cut taxes so we could get financial growth, also help the GDP and lower the unemployment rate. Plus is increased jobs here in the United States he made a good trade deal with Canada Mexico and America. He sanctions China and he brought factories and jobs back from China the United States. He lowered regulations that Obama had placed against companies and made it almost impossible for them to make money where they could hire more people or increase people’s hours and raised their salary. I did not notice one irrational things he did that would hurt the USA in any capacity. Just because I support President Trump doesn’t make me a deplorable person nor does it lower my intelligence. Being a republican I did not tried to break into the capitol I have better sense than that. Hatred is a bad thing and it makes you do irrational things when you operate under that hatred. During President Trump’s turn I saw some ugly stuff performed by the Democrats made their faces so ugly and it was all because of their hatred for Republican Party led by President Trump. I don’t think they know what they’re fixing to get into I’ll be glad to Enlighten you your actions are entitling the Antichrist to take over this world with you ask the people he will terrorize. Jesus therefore will be taking his people to heaven during the rapture where they will be with him in heaven for the 7 year tribulation. If you do not turn your life over to Jesus and repent before the rapture he will have to endure the 7 year tribulation. I pray you have not committed the unforgivable sin I am afraid most of you have sold your soul to the devil for what is unbelievable to me my soul is worth more than power, riches or admiration. I pray you real bow down to Christ the savior repent of your Wicked Ways minutes and Siri I believe in the father raising his son from the grave and having victory over death. there is not one man on this Earth that I place higher than my savior. I have admired was my dad , my papa, my Grandad Luther , Harold Carter and Bruce Ragan.

How an administration in two month can lose support, that’s a question for the Democrats. Now we know why they have the National guard there.

Actually their is should an attack take out washington he would have the knowledge to stand in keep the power of the presidency acting to protect the nation. we always have radical elements that want to disrupt the nation with removing all within the path to a presidency. is it likely? NO but best not to take a chance.—-Grampa

Biden is too old he has early dementia. He should not be President. He is now hugging women who are afraid to stop him! The Democrats are disgusting. How embarrassing for our Country !

Thank goodness he is not making this decision. In just over a month he has proved he is not out President either.

They must really hate Trump. He did so much good in 4 years, had to fight for everything.