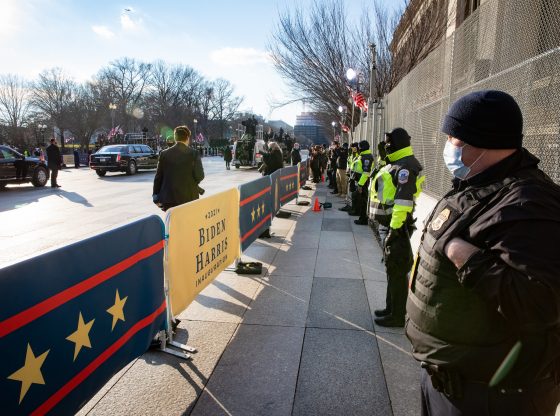 Despite the lack of any publicly available, concrete evidence to justify the massive overreaction of deploying 26,000-armed National Guard Troops to the District for the Biden Inauguration, the Democrats, and others in government, have saddled taxpayers with a nearly half BILLION-dollar charge. As I noted earlier, during the Inaugural week, downtown Washington, DC was a desolate, heavily fortified, ‘no man’s land.’

The massive National Guard deployment brought troops in from all 50 states and four territories as law enforcement agencies essentially lock down the Capitol and downtown DC for Biden. The thousands of Guard troops were stationed behind unscalable fencing topped by razor wire at the Capitol, and across the city to block traffic and protect landmarks. Thousands of troops remain in Washington weeks after the Inauguration, and up to 7,000 are expected to stay until mid-March.

And this unprecedented, and many argue, unwarranted, show of military force in the nation’s capital doesn’t come cheap.

Officials said the nearly $500 million includes the costs of transporting Guard troops from their states to Washington, their salaries and benefits, as well as housing and other essentials. The officials were not authorized to publicly discuss internal figures and spoke on condition of anonymity.

Because the troops were activated by the federal government for more than 30 days, their health benefits are also covered, adding to the price of the deployment. Officials say the money is expected to cover the costs of the Guard through mid-March, when the troops are expected to leave. Between 5,000 and 7,000 troops are scheduled to stay in Washington through March 14.

The stated justification for this military ‘occupation’ was as a response to the ‘deadly’ January 6 Capitol riot, where hundreds of unarmed protesters swarmed and occupied the Capitol building. Though violent at times, only one person, a rioter – Ashli Babbitt – was confirmed killed directly in the riot. She was shot by a Capitol Police officer.

One Capitol Police officer died afterwards, but autopsy reports show no signs of injuries that could have caused his death. Three other protesters died of natural causes or existing medical conditions.

Various government sources, including the Department of Homeland Security (DHS) noted increased threat of ‘militia activity’ and their threats to come armed to Washington for the Inauguration, but no specific threat assessment that I am aware of seemed to justify 26,000 troops. While, in terms of security, I am always a strong proponent of better safe than sorry, this event certainly appeared like massive overkill.

Many called it ‘security theater.’ I also called it political theater, noting that it seemed as much a scare tactic to frighten average Americans of the made-up threat from Trump supporters and Republicans in general.

Ultimately, absolutely nothing materialized in Washington – except the $500 million price tag.

Hope the Democrats will pay for it not the voters they are the ones who are responsible for calling in the groups for absolutely no reason.

Never happen it’s coming out of all of our pockets.

Time to IMPEACH this FASCIST SOB ChinaJoeBiden and Commie-la Harris !

Ashli Babbit was not a rioter , but a veteran of the US military . She was murdered by John Sullivan ‘s antifa / blm thugs . Sullivan was only a few feet away from Ashli when she was shot .

We call that murder in the FIRST DEGREE. He will never see any charges. Hope the family sues the HELL out of them and bankrupt them for life. A civil trial will be his death and he deserves it.

I am tired of this deployment being called political theatre. The deployment is absolutely vital. Don’t you understand that the Army of Northern Virginia under General Lee is advancing on Washington from Richmond? Already, J.E.B. Stuart’s cavalry has been foraging in the Washington suburbs and has seized several thousand cases of Cheerios and Slim Jim to feed that army. Let’s get serious here about that threat.

What’s a half billion dollars when Democrats can create a show? We had to do this because of right-wing rioters and protesters who didn’t even remain overnight.

OH THE POOR BABY BIDEN SCARED SHITLESS. SO YOU BURN A BILLIONS DOLLARS TO PROTECT YOUR SORRY REAR END. YOU DAMN DEMS BURN ME TO NO END. AND WHO TOLD THE MILITARY TO STAND GUARD —— I BET IT WAS SCUMBAG PELOSI . WELL LET HER PAY FOR THE PROTECTION NOT THE AMERICAN PEOPLE.. LIKE PELOSI STIMULAS. – SCREW HER.!!!!!!

Same here! The DemoRATS are so scared, they won’t even go out amongst the people because they know they have created their own condemnation and political violence is probably sure to erupt, which they will be the target of. They created it with their rhetoric, so now pay the consequences.

Can someone publish an accounting document on these expenses ?? Where is the authorization and by whom ??

How unpopular is Joe Biden if he needs 25,000 troops to enforce his illegitimate election. Fewer troop were used in Myanmar

How ridiculous this administration does not care about the tax payers of this country. They needed the National Guard like we need another whole in our head. It’s outr.

Why not send a couple of Aircraft Carriers to patrol off the coast? That way they could just launch the A-10’s or Longbows for close-air support which would not require tens of thousands of infantry troops to sleep on the hard concrete floors of parking garages!

Would it be correct to say they will deduct ‘housing’ off? And bedding, and comforts of a ‘warm’ room, etc. ?????

Hope you are ready for the “left’s” spending spree. They seem to be unaware that ‘someone’ has to pay the bill. I have always wondered if this might be their “real” plan — bankrupt the Country and pick the bones for a ‘song’. Fiscal restraint just doesn’t hack it with these spendthrifts.

When does a fence become a cage? Asking for a friend.

Dems have always thrown away money like drunken sailors on shore leave.

I enjoy your insights in the defense world, but you’re completely out of touch with who caused Joe Biden to be elected. It was Donald Trump. He was also the instigator of the attack on the Capiitol. Seven million Americans did not vote for Joe Biden. They voted against Donald Trump. Our hope in the Conservative community was that Trump would attract more people to the movement. Instead, he drove them away from Conservatism and the Republican Party. It will take a long time to rebuild, and we may not regain the majority for a long time. There is a lot of chatter that QAnon is actually a disinformation campaign sponsored by the SVR. What better way to divide us than to have Putin’s stooge leading the way. They are still laughing in Moscow. . . and Beijing.

Remember what they say in Rome,,,beware the Ides of March.

Hey the Repulbicans caused it. Trump in particular. As McConnel said he’s guilty but constitutionaly he voted aquital because he was too afraid to call the Senate back to have the trial while trump was in office. Yellow bellied sap sucker

Surprised that Kim Jung Biden didn’t have Tanks and a Military Parade, he sure had an Army of Troops to show how scared he is