ANALYSIS – As I wrote in my previous piece, it seems Trump was right, there was a massive conspiracy to keep him from a second term in office, and Time Magazine just admitted it. The Time piece, titled “The Secret History of the Shadow Campaign That Saved the 2020 Election,” by Molly Ball, is the closest thing to a criminal confession by Big Media of the outrageous conspiracy to defeat Trump that there is.

Earlier I focused on how this “well-funded cabal of powerful people” (as described by Ball) manipulated the entire political process to hurt Trump and help Biden.”  And Ball is very specific in describing how their massive election conspiracy worked:

They got states to change voting systems and laws and helped secure hundreds of millions in public and private funding. They fended off voter-suppression lawsuits, recruited armies of poll workers and got millions of people to vote by mail for the first time.

But, as I noted, there was much more to this vast anti-Trump conspiracy to affect the 2020 election and defeat Trump. And it is highly disturbing and dangerous. As the Wall Street Journal notes:

Perhaps the most disturbing portion of the Time report is the description of the alleged effort to counter false political claims. Much of the political left has decided that censorship by media companies is superior to free and open political discourse.

The disgraceful partisan effort to censor pro-Trump, and anti-Biden, news – under the guise of ‘countering disinformation’ – was a key element of this election interference strategy.

Referring to this conspiring cabal, Ball added, they also “successfully pressured social media companies to take a harder line against disinformation and used data-driven strategies to fight viral smears.” In essence the Democrats and their allies, hijacked Big Tech to fight their election propaganda war for them – all under the guise of ‘combating disinformation.’

Ball describes how this was accomplished:

Laura Quinn, a veteran progressive operative who co-founded Catalist, began studying this problem a few years ago. She piloted a nameless, secret project, which she has never before publicly discussed, that tracked disinformation online and tried to figure out how to combat it. One component was tracking dangerous lies that might otherwise spread unnoticed. Researchers then provided information to campaigners or the media to track down the sources and expose them.

The most important takeaway from Quinn’s research, however, was that engaging with toxic content only made it worse. “When you get attacked, the instinct is to push back, call it out, say, ‘This isn’t true,’” Quinn says. “But the more engagement something gets, the more the platforms boost it. The algorithm reads that as, ‘Oh, this is popular; people want more of it.’”

The solution, she concluded, was to pressure platforms to enforce their rules, both by removing content or accounts that spread disinformation and by more aggressively policing it in the first place…. Quinn’s research gave ammunition to advocates pushing social media platforms to take a harder line.

Much of this suppression and censorship effort was directed at any information that could help Trump or hurt Biden. This included the accurate October bombshell New York Post reporting on Biden family influence peddling outrageously blocked by Twitter and other media outlets. 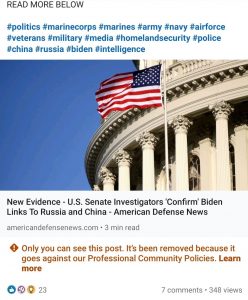 For those that continue to say there was no “fraud” in the 2020 election, the question is: Then what do you call this? How about ‘election interference.’?

Democrats are scum nothing is beneath them, most of them should be in prison.

There is a lot beneath them. It’s a shit pile. The very reason they are so hateful . They can’t get off it.That’s what makes them SCUM.

You know what , the Republicans have had their chance to save our President Donald Trump and would not stick together, and some Republicans turned on Trump. When the Supreme Court also turned away from Trump the Republicans with Trump should have came down and issued the Insurrection Act of 1808. USA Troops Could have came in and recounted the fake and Corrupt votes that were cast. Way to late now.. Now we will pay the price. Gone forever are AMERICAS GLORY DAYS. SO SAD
BOBBY ~!~

YES. AND I want to know why the Sen. Cruise team of majority state delegation House Republicans [27-R vs 20-D], after properly recording at least 138 objections against the corrupted Electoral Ballots, did not immediately invoke the 12th Am. to quickly re-elect President Trump per Constitutional process, using their Constitutional state delegation’s majority jurisdiction?
The 12th Am. is clear: “ the House of Representatives, convening by state delegation, is required to pick the next president when no candidate has a legitimate majority of the Electoral College.“
At least 138 objections were properly recorded against certifying Biden’s electors in the Senate Jan 6. Therefore, the House Republicans’ state delegation majority of 27 Electors vs 20-Democrats’ state delegation, could have convened per the 12th Am. to quickly rectify the election of the next president [re-elect President Trump], before the corrupted Senate Electoral College count certified the FRAUDULENT 2020 Election for ChinaJoeO’Biden/usurperCommie-laHarris-Ho.

If only the House Republicans had timely executed their jurisdiction in the House, Americans would be blessed with President Trump in 2nd Term, the FalseFlag Antifa/BLM/Pelosi/Schumer/Soros’ attack on Capitol Jan 6 avoided, and we would be back on tract as a united Nation with President Trump draining the DC-SWAMP and making USA elections honest for all American Citizens, America economically sound and military strong, US-Borders Protected from illegal alien criminals and Islamic Terrorists, Freedom of Speech assured, and our God-Given Rights to Keep and Bear Arms supported by our federal government, and our Constitution FOR the USA protected against all Enemies, foreign and Domestic.

Saved Our Country… No Way-!!! PRESIDENT TRUMP would have continued to SAVE OUR USA-!!! DemoncRats want to destroy it-!!!

ChinaJoeBiden/s military will do no such thing.

We won the election…. but lost the country by thieving, lying, corruption, and denial.

We need to engage with tactics proven by communists. We HAVE to fight fire with fire. As Mao tse Tung said, “Justice comes from the barrel of a gun.” Read his “Little Red Book”. KNOW your enemies. Republicans don’t know how to anticipate and plan to negate democrat strategy. In anticipation, we can flank their operations and cancel them out.

We MUST take the offense. As long as we are on the defense, we only back up.

That would require somehow restoring the spines of most conservatives, which have been slowly dissolved by PC and other successful tactics of the Left, who know how to get what they want. Conservatives are “nice” people, and mean to stay that way, even if it means losing their freedom and country.

When considering alternatives or actions, the 1st thing on a conservative’s mind is “will I offend or hurt anyone?” If the answer is a possible ‘yes’, or ‘maybe’ then that option is permanently removed from the table.

Conservatives believe and often repeat that “violence never solved anything”, but are 100% for the military, police force, and 2nd amendment, all of which rely on violence as a solution for the problems delegated to them to solve. But don’t point this out to them, because it will short circuit their brains, and tend to jump start thinking, which will detect an empty fuel tank and simply shut down the thinking process, resulting in post-thought upset.

Post-thought upset may cause them to start calling the Left “stupid” to change the subject, not realizing how the Left has usually gotten what they wanted, while conservatives keep stepping back to accommodate them, drawing yet a another line in the sand to show that they “aren’t going to take it anymore”, and play “nice” as they were taught, growing up.

The big. R. in republican stands for. RETREAT ! as long as the RINOs are in charge of the Party.

American’s are taking Puppet Biden’s election fraud quite well. Borders are opened again and a razor wired border wall erected in DC. Biden still killing jobs in energy, schools still closed but teachers are paid full salary. Republican’s are rubber stamping all of Biden’s nominations and US attorneys being fired – to prevent investigations and allow criminals to roam free. Free speech has been removed. The world is having a belly laugh and thanks to China Joe we are now a paper tiger. Republican’s still aren’t sure what China Joe’s motives are.

FYI…neither does Joe. Joe will be ‘retired’ soon – he’s looks terrible more so every day.

Did not support Trump when he was President but do now. He was a good President that was not political and that is why he so hated. Political parties are all control which you can see with Democrats. They can’t stand that a President doesn’t bow to their policies , but President Trump made it clear he was for the people. Not happening now with President Biden erasing all the good that President bTrump did. It’s going to be a long and hard four years with the Democrats.

President Trump is the best president we have ever had, bar none. Now everything is only going to go downhill for the next 4 years. Will we even have a country anymore that isn’t communist and controlled by China? Thanks a lot to all you unholy bastards who voted for sleepy Joe. It’s already biting you in the ass!

Finally someone is bringing out the truth.

In less than one month, our regular gas has gone up from $1.89 per gallon to now $2.59 to $2.79 per gallon. Diesel fuel has gone up nearly $.85 per gallon… If you think that’s going to hurt, you’re right. When the truck bringing your food and necessities get 5 to 7 miles per gallon, that $.85 per gallon (and rising) diesel fuel is making everything much more expensive…. Unemployment is sky rocketing, changes in laws is rapidly coming down the road… Freedoms and rights are quickly disappearing… Is there an end in site???