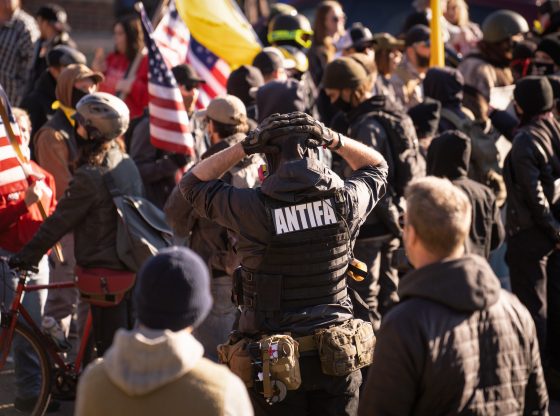 ANALYSIS – With an almost religious zeal, the federal government is suddenly, and controversially, hunting for ‘far-right extremists” everywhere, including America’s military. As I noted, President Biden’s new Pentagon chief, Lloyd Austin, has ordered his own, highly controversial, 60-day pentagon-wide stand down to address this alleged concern.

This politicized crackdown was super-charged by the January 6 Capitol riot that partisans and the media are deceptively spinning as an ‘insurrection,’ and fears of violence during President Biden’s Inauguration.

The highly militarized Biden Inauguration was one result. The other was a hunt for alleged ‘right wing extremists’ intent on wreaking havoc in all 50 state capitals on Inauguration day. However, as the Washington Post notes, after January 6:

Despite warnings of violent plots around Inauguration Day, only a smattering of right-wing protesters appeared at the nation’s statehouses. In Tallahassee, just five armed men wearing the garb of the boogaloo movement — a loose collection of anti-government groups that say the country is heading for civil war — showed up. Police and National Guard personnel mostly ignored them.

Instead, what the FBI did find in its large dragnet in Florida was a radicalized leftist ex-soldier – Daniel Baker. The Post describes the arrest of this far-left extremist in Florida’s capital – Tallahassee:

Shortly after sunrise on Jan. 15, FBI agents descended with guns drawn on a squat, red-brick apartment complex here, broke open the door of one of the units and threw in a stun grenade, prompting the frightened property manager to call 911.

Inside the apartment, furnished with little besides books and a sign declaring “THE REVOLUTION IS NOT A PARTY,” the agents found their target: a 33-year-old U.S. Army veteran and self-described “hardcore leftist” who had posted a flier on social media threatening to attack “armed racist mobs WITH EVERY CALIBER AVAILABLE.”

The FBI’s concern was that Baker intended to provoke violence in Tallahassee on January 20 during Biden’s inauguration. This arrest confirms the fact that the domestic threat is not just composed of those on the right. But the far left and its radical revolutionaries have their share of possible ‘domestic terrorists’ as well.

The Post reported that at Baker’s arraignment, the U.S. Magistrate agreed that Baker posed a potential threat and ordered him held without bond, writing that the ex-soldier had “repeatedly endorsed violent means to advance the political beliefs that he espouses.”

Rather than pin any blame on the far-left for their actions and behavior in recent years promoting anti-police and anti-white hate, and denouncing all whites as complicit in racism, the media simplistically turns this threat of leftist domestic terror into a reaction to the ‘right.’ The Post writes:

…Baker represents the flip side of that threat: As a far-right extremist movement wages an assault on American government and institutions, experts say an unpredictable battle is brewing, fueling potentially legitimate threats of violence from the opposite fringe of the political spectrum [AKA – The Left].

Baker served less than two years in the U.S. Army before going Absent without Leave (AWOL) in 2007 and being discharged under “other than honorable” conditions. A supposed yoga devotee and self-declared Socialist, Baker went to Seattle in the summer to support far-left BLM protesters and anarchists who briefly claimed an abandoned police precinct and declared the area an autonomous zone (Capitol Hill Organized Protest – CHOP).

In the Post, Steven Chermak, a professor of criminal justice at Michigan State University, while predictably spinning the argument, to lessen the role of the Left, says: “high-profile right-wing attacks could be spurring far-left extremists to respond in kind.”

More accurate though, is his other comment that the ideological warfare is simply “ratcheting up and then getting a response and a back-and-forth.”

The bottom line – The Baker arrest should be seen for what it is – a clear indication that elements of both the far-left and far-right are being radicalized and pose a possible domestic threat.  All ‘extremism’ must be taken seriously and faced, not just one side.

It is interesting and insightful that I did not see or hear this information on any of the mainstream media outlets. I guess if the real news does not support their fake narrative then it is ignored. Lies committed by omission are just as relevant as lies of commission. THINK ABOUT IT!!

I don’t agree. I haven’t seen organized elements of the far right going into action as of today. All organized actions have been launched by the far left.

Seattle to Tallahassee went the peripatetic Baker. One wonders how he finances his journeys and his misspent days. George Soros, perhaps?

The second largest criminal organization in the world only looks for American Patriots to murder! They have murdered thousands of us since Carter and the Waffen SS will become bolder in murdering innocent American citizens!

Most of the politicians do not follow the U.S. Constitution.

so it starts with the invasion of ourhomes because you might commit a crime. well what about all the illegals you let out of custody? wont they commit a crime? why not start with the proven felons?———-Grampa

They are looking and targeting Trump supporters calling us domestic terrorists. Maybe they have missed the riots and murders that last year by antifa and blm. The only time we shot off a gun was in self-defence. But that is only true if you live in the USA, not the socialist states. Yeah, it’s pretty bad when you can’t even call for protection, you’ll be the one arrested. And they were surprised about a left wing terrorist? What a bunch of hypocrites.

In storming of the Capitol, ahead of President Trump supporters, were over two hundred Antifa members. You see them on the clip with red MAGA cups on. My question is – how many were interrogated by FBI? I do believe, this was plan prepared long time before riots. Who paid for that? This strategy – to start riot and disappear, is normal tactics in the communist’s countries, when is needed to destroy opposition. It is well known knowledge that mob behavior is different from behaviour of any single person.

It was paid for by Soros and led under the guidance of Nancy & Chuckie.

Senile far left wing Democrat wannabe king Biden I must be impeached ASAP, before he hurts the USA by causing a second civil war!

Take him out of office and camel toe Harris will take his place which do you think would be the worse for the country.

The left is made up of a bunch if Egyptians, they all live on denial