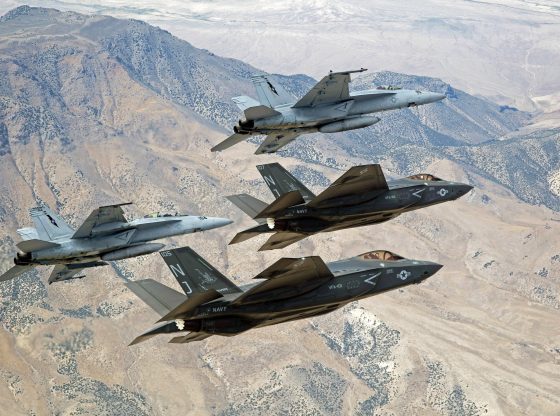 One of the most significant developments in naval aviation at the moment is the widespread proliferation of U.S. 5th generation, highly networked F-35B stealth fighters among America’s allies’ navies. The cross decking of U.S. Marine Corps F-35Bs on Britain’s newest flagship carrier the HMS Queen Elizabeth is perhaps the best example.

Japan possibly working to similarly integrate U.S. Marine Corps F-35Bs, or their own F-35Bs, onto their navy’s Izumo class helicopter ‘destroyers’ is another one.

But now we have Italy sending its flagship ITS Cavour aircraft carrier to the U.S. for training and certification with the F-35B Vertical/Short Take Off and Landing (VSTOL) jet fighters.

The Italian ship, commissioned in 2009, is 800 feet long with a complement of approximately 1,200 personnel.

According to Stripes, the process is part of Italy’s required “Ready for Operations” certification. The Italian Navy has bought 15 F-35Bs and the carrier is expected to get its first in April. Captain Gianfranco Vizzini of the Italian navy noted the carrier’s crew would spend six weeks training to become qualified for the F-35Bs.

As reported by Stripes, the Italian ship arrived on Saturday, February 13 “for what’s expected to be a several-weeks stay to ensure it can safely launch and land F-35B jets.” Stripes quoted Vice Adm. Andrew Lewis, Commander of U.S. 2nd Fleet as stating:

Supporting our Italian allies in certification of their aircraft carrier increases our collective experience in safety and combat abilities. We are stronger together.

Enroute to the U.S. east coast, the Italian aircraft “carrier was met in the Atlantic Ocean by the crew of the Norfolk-based USS Stout destroyer to conduct three days of exercises with help from the Virginia Beach-based Carrier Air Wing 7 and Jacksonville, Florida-based Patrol and Reconnaissance Wing 11,” noted Stripes.

The Italian Navy will replace its 16 Harrier V/STOL jets aboard the ITS Cavour with 15 F-35B Lightning IIs. The Cavour completed the modernization to allow it to support F-35Bs in May.

Cavour reportedly will have room for ten F-35Bs in the hangar, and six more parked on deck.

A public affairs officer for the U.S. 2nd Fleet said the Italian ship’s crew is expected to stay on board the carrier during the F-35B testing and certification process due to COVID-19 restrictions.

The increasing use of U.S. F-35s by America’s closest allies is a tremendous combat multiplier because of the aircraft’s stealth and networking capabilities. Their ability to ‘plug and play’ with U.S. capabilities magnifies their impact.

This is especially true in the case of their being integrated into allied carrier operations, allowing them to mesh more seamlessly into U.S. carrier and other naval operations.

only thing is Italy has the most porous security of all N,A,T.O.

Impeach Obama for Benghazi deaths and cover up that took place.

Obama should also be impeached for Fast N Furious that left Border Officer Brian Terry dead. Holder should also be held accountable the pos. The list of things Obama and his disgusting crew did to this country is a mile long, all of them should be in prison.

I don’t understand these Europeans. First with their 550 million people, they are not able to build a a combat airplane that makes sense. Second, Italy is bankrupt, literally bankrupt, why do they spend money into that. This plane is far from being operational, notwithstanding the huge amount and complexity of support it requires. And that’s in time of comfortable peace. Imagine in time of a real war with a competent land/air/sea enemy. And Russia is never going be able to come all the way to Italy; they don’t have the people and the money.

I just wonder how long it will be when some of these F-35 Stealth Fighters find their way to Russia and China. We need to keep these top Secret Fighters her at home USA.
BOBBY ~!~

And all Union soldiers are now wearing union underwear. Think of it!