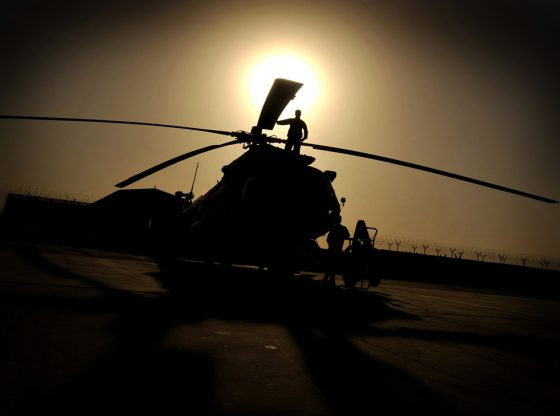 Russia has been pushing the envelope on sophisticated military technology in recent years, but also pushing the hype. Most recently with their claims to be developing body armor suits that will withstand hits from a .50 caliber round as I described here. But now they are reportedly deploying an odd-looking new, two-ton armored air assault ‘buggy’ that is supposedly helicopter transportable.

So this is apparently what the Lasok 4-P Mi-8AMTSH helicopter-transportable armored vehicle looks like. It reportedly weighs 2,045 kilograms with a carrying capacity of 650 kg. 2/https://t.co/jX7VJfvtAGhttps://t.co/Wu5pwXI7LW pic.twitter.com/Jdfjn0MguY

Thomas Newdick at The Drive explains how the Russians appear to have come up with the odd design:

…this vehicle’s design seems to have been driven by the decision to incorporate a V-shaped hull to protect against improvised explosive devices (IEDs) or mines. This likely resulted in the unorthodox angular bodywork. However, the flimsy-looking mudguards, spare wheel mounted on the door, and the shielded blackout headlamps all seem to owe more to a vehicle design from the interwar period between World War I and World War II than what you might see on the modern battlefield.

…the Lasok 4-P was based around the specific need to be accommodated in the hold of a Mi-8, which can carry loads of approximately 8,800 pounds and, in Mi-8T form, has a height of around 6 feet, length of 17 feet 6 inches, and width of 6 feet 9 inches. As such, the Hip can normally only transport vehicles in the class of the civilian Lada Niva, or the military UAZ-469 jeep, which still needs the top of its roof removed for transit.

A press release on the website of the Innovatsionnoye Shassi, or Innovative Chassis, company, based in Samara, in southwest Russia states that: “In 2020, under the guidance of specialists from the Innovative Chassis Research Center, a prototype of a compact armored vehicle — the Lasok Airmobile Light Armored Vehicle — was proactively assembled.”

The company, according to Newdick, “says that the four-seat Lasok 4-P prototype is based on a modular layout derived from the Locust armored assault vehicle, or BShM, but incorporates a lighter four-wheel-drive chassis.” The Drive continues: “What army units needed is an armored car — all-wheel drive, compact and lightweight, built on the basis of domestic series-produced units.”

While it isn’t confirmed yet that this in fact is the Lasok 4-P, the Russian company notes that “the vehicle is intended for use by special forces, advanced combat and reconnaissance groups, patrolling, and for supporting engineering and assault units, including in mountainous and rugged terrain.”

The Drive adds that, a “production version should also have armament, in the form of a machine gun, up to 12.7mm in caliber, on a “tower installation” that can retract into the cabin when not in use. A folding armored shield will be provided for the gunner.” It will also include “remote-controlled weapons stations.”

The company also claims it “plans to develop counter-drone versions of the vehicle, which would be equipped with electronic countermeasures to disrupt the guidance systems used by unmanned aerial vehicles.”

If this, in fact, is the Lasok 4-P destined for Russia’s air assault forces, this odd new buggy could provide them valuable added capabilities. Or it could be hype. Time will tell.

Interesting but I would like to see how it compares with our non production next generation counterparts.

Russian president, Vladimir Putin is wise for his policies. Putin is defending biblical family values which is the strength of any nation. Interesting how they are surging ahead in technological, military, academic and common sense achievement ahead of other countries. Pray for America. We should be doing the same, not based on common core, equity or equal outcomes. Each individual person is created by God and should have the protections of the U.S. Constitution to be able to live out their potential in life. Amen.

May the Lord give those in the United States defense department wisdom to compete with Russia’s advance in military technology. Also, Just wanted to pass on Patriot Academy’s reminder of Ronald Reagan’s speech after the NASA Challenger disaster in 1986. Ronald Reagan said, “I want to say something to the schoolchildren of America who were watching the live coverage of the shuttle’s takeoff,” Reagan said. “I know it is hard to understand, but sometimes painful things like this happen. It’s all part of the process of exploration and discovery. It’s all part of taking a chance and expanding man’s horizons. The future doesn’t belong to the fainthearted; it belongs to the brave. The Challenger crew was pulling us into the future, and we’ll continue to follow them.” Have a good evening and God bless to all.

Now faith is the reality of what is hoped for, the proof of what is not seen. 2 For our ancestors won God’s approval by it.

3 By faith we understand that the universe was created by God’s command, so that what is seen has been made from things that are not visible.

6 Now without faith it is impossible to please God, for the one who draws near to Him must believe that He exists and rewards those who seek Him.

So…. with the UN small arms treaty and OBiden’s anti American agenda, I wonder how long before we start seeing those in our cities?

The good news? I woke up this morning, one day closer to The Rapture! People get ready!

Ready or not, Jesus will come!