US Sends B-1 Bombers to Norway to Deter Encroaching Russia

US Sends B-1 Bombers to Norway to Deter Encroaching Russia 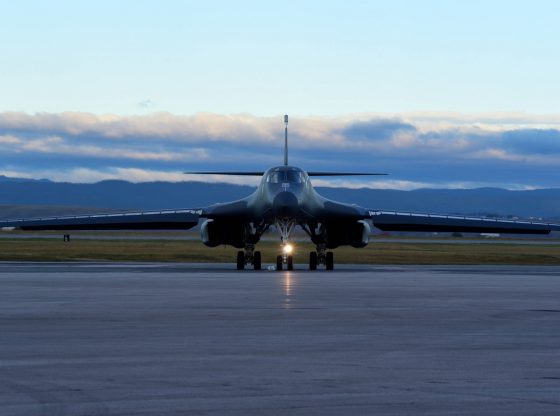 As part of its growing focus on Arctic warfare and countering Russia on NATO’s flanks and more vulnerable states, such as Poland and the Baltics, the Pentagon has deployed supersonic B-1 strategic bombers to Norway. CNN reported that four B-1s will go to Orland Air Base in Norway for missions in and around the Arctic Circle.

The new move, notes Warrior Maven’s Kris Osborne, brings “substantial aerial firepower much closer to the region in the vicinity of the Russian-dominated Northern Sea Route…” It also allows for a greater operations tempo for Bomber Task Force patrols in the area.

Ultimately, Osborne notes, it “sends an unmistakable deterrence message to Russia, indicating a growing resolve to increase presence and operational readiness in the area.”

This added firepower and resolve is needed due to Russia’s aggressive return to the Arctic and push against NATO’s northern flank. CNN quoted former Trump Secretary of the Air Force, Barbara Barrett, as warning:

Recent Russian investments in the Arctic include a network of offensive air assets and coastal missile systems. The U.S. assesses that Russia considers maintaining its own Arctic access increasingly vital with almost 25% of its gross domestic product coming from hydrocarbons north of the Arctic Circle.

However, fighting in the frigid arctic brings a host of challenges to both planes and personnel. Osborne notes that:

This raises the important question, writes Osborne, “as to whether the older airplanes are fully cold-weather hardened.” He adds:

This is to a large degree why the F-35 stealth fighter, for example, has been specifically prepared for temperatures forty-degrees below zero through an elaborate cold weather preparation and hardening effort which included climate-controlled testing and specially engineered cold weather gear for pilots. Perhaps the B-1 is being modified, or even slightly adjusted in a particular way such that it can successfully operate at full mission capacity in the Arctic, despite environmental restrictions.

Let’s assume the Pentagon and Air Force are on top of this cold weather issue, and the four recently deployed B-1 bombers now in Norway will continue to operate effectively throughout the region.

So, now we will defend Norway’s border but not our Southern border. What’s wrong with this picture?

Norwegians come the right way to vote! Snark snark. We do need to defend the arctic. I live in Alaska. In 1974 while fish on Chena River, north of Fairbanks., not far from one of our air bases…..zoom, , low flying mig jet screamed over our heads at tree top leave, them an obvious USA JET SCREAMWED PAST! THEN 5 minutes later the Russian mig screamed back down the river. Mind you they got inside our border by at least 3-500 miles at that point. They have been buzzing our huge borders along the coats increasingly over the last year. I expect increase now commie Biden and Harris installed.

It’s actually fals flag after false flag and an attmpt to return to the Cold War witrh RUsia – meanwhile Don’t look at China L:ook at Russia.
Wake up the anti Trumnp MSM has been going after Rusia since the Obama years – why’s that? Russia dumped communism and Marxist Obama didnt want Americans to see ther is a better way – so pretend Russia is bad Russia is the enemy Meanwhile Get Chinese Marxist into our Universities.

Biden is such a ‘boob’! How much are we paying the Norwegians to be in their country?

With demented Xiden acting as prez, there’s no deterrent.

Joe is going to cause another Benghazi, watch it will be a matter of time of Joe’s irrational decisions

China Joe Xiden is NOT PRESIDENTIAL MATERIAL ! He never was and never will be !

That is why Obama offered him vice p. because Obiden made Obama look smart .

Well said Herbert. Thanks. Obama and Biden are both inexperienced at running anything but community disorganizing. Neither is qualified to run a large organization. We constitutional Americans hope you “Xiden” voters are happy with the disaster you’ve brought upon this great USA.

[…] US Sends B-1 Bombers to Norway to Deter Encroaching Russia […]

We send four B-1s to Norway and 17 to the boneyard. What logic!!

The Air Force’s B-1 is probably prepared for freezing operations as well as the state of Texas was for the recent winter storms that hit it.

You might be right Jerry but we are one nation under God–NOT under Karl Marx or Saul Alinsky.