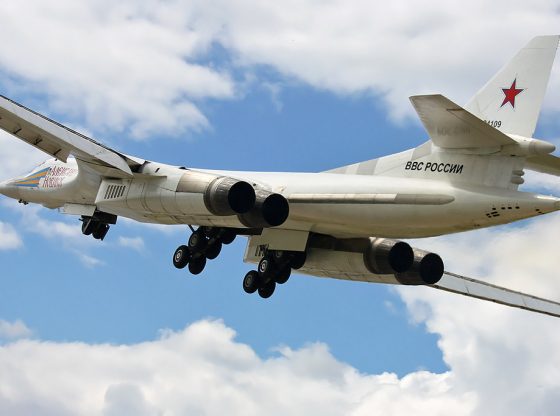 RUSSIA THREAT – Days before the U.S. made its first ever deployment of four B-1B Lancer supersonic bombers to Norway, which I described earlier, two even faster Russian Tu-160 Blackjack bombers flew a 12-hour mission over the Barents, Greenland, and Norwegian seas. The Blackjacks from the Russian Aerospace Forces are reportedly based at Engels Air Force Base near Saratov in southwestern Russia.

From Engels the bombers have to fly north to enter international air space without violating other nations’ borders.

A tweet in Russian by @galandecZP showed a map with the flight path and photos of the aircraft involved.

The strategic bombers flew out to the Barents Sea from the Kola Peninsula before the route continued further north and west outside Norway. Then, according to the Twitter user “Hunters Note”, who tracks military aviation signals, the aircraft flew west in the Greenland Sea near Jan Mayen before heading north of Svalbard, across Franz Josef Land towards Novaya Zemlya where another pair of MiG-31 from Rogachevo Air Base escorted the strategic bombers over the Kara Sea en route south.

The Russian Ministry of Defense released a video of the flight earlier in the month. According to the Defense Ministry website: “Fighter escort was provided by the crews of the naval aviation of the Northern Fleet.”

The Russians planes were tracked by NATO and intercepted by two Norwegian F-16 fighters on Quick Reaction Alert (QRA) based at Bodø Air Base. Their bomber mission occurred on the same day as the major Norwegian defense exercise Arctic Hawk 21, which involved all of the country’s military branches: Navy, Army, Home Guard, Air Force and Cyber Defense.

A spokesperson from Norway’s Joint Headquarters told thebarentsobserver: “Our QRA F-16s were scrambled. They identified the Russian aircraft in international airspace up north. This is normal procedures.”

Unlike to conventionally armed US B-1Bs now in Norway, the Russian Blackjacks are nuclear-capable.

The flight coincides with US preparting to deploy four (non-nuclear!) B-1 bombers to Norway for the first time. https://t.co/ss9SohrJmo pic.twitter.com/pZxukOdvFf

The Tu-160 was the last strategic bomber designed by the Soviet Union, entering service in 1987 and designed to compete with the U.S. B-1 bomber. The latest model is the Tu-160M which was delivered after being thoroughly upgraded, in 2014.

According to airforce-technology.com, the jet holds 44 world records. It can carry nuclear and conventional weapons including long-range nuclear missiles. The missiles are accommodated on multi-station launchers in each of the two weapons bays.

The Russians are also reportedly considering arming the Blackjacks with Kh-47M2 Kinzhal (‘Dagger’) nuclear-capable hypersonic missiles with an estimated range of 1,200 miles and a speed of up to Mach 10. This would make the jets even deadlier.

US Navy Deploys TWO Aircraft Carrier Strike Groups Near China
Iran Challenges Biden with Rocket Attack in Iraq – How Will He Respond?

And what is our country doing? Wasting money on bogus impeachments and welfare for illegals

May be they should do it over DC and drop one

According to airforce-technology.com, the jet holds 44 world records. It can carry nuclear and conventional weapons including long-range nuclear missiles. The missiles are accommodated on multi-station launchers in each of the two weapons bays.

And what is lie-den doing with our military? Transgender education and brainwashing in our Navy? Make sure all of the fringe loons are well accommodated in our military forces.

True, Yo. It doesn’t scare the Russians but it damn well scares me.

Biden answered, ” com on man, we wen over the tunnel to eat under the you know, the thing, and he is not guilty, therefore it doesn’t reach,come on man.

Our adversaries view Biden as a weak President, because he is. They’re sending a message that they think he’s out of his league, having never held a management position that required him to make important decisions.

You’ve head the term “poking the bear with a stick” this is the bear poking Biden to see if he is awake.

Where is the bill to change the name of Washington Distric of Columbia. The cancel culture has missed their make they both were slave owners, I think is should just be Capital City of Americia

Under Biden/ Harris DC will have to be renamed “Beijing East”, since they are both bought and paid for by China CCP.

Add “Forbidden City” to that as well.

Forbidden to American tax payers by The Pilosi Curtain

That fence is the internment camps of DC you vote democrat, or you will never be seen again.

PRESIDENT TRUMP was rebuilding our military so we would not be vulnerable to attacks from russia and china.
Now we are susceptible to all foreign attacks, all American men, women and their children will pay the price for obama, biden, and democrats greed and treasonous decisions.
WAKE UP AMERICA WE ARE NOW PAST THE NOON HOUR THANKS TO obama, biden and democrats.
Have you been saved, if not Now is the time to ask ‘GOD’ for salvation.
PREPARE TO MEET THY “GOD”

So now America has ‘The Grub’ sitting in the Oval Office! Once again as in times of the Spear Chucker the world laughs that the United States is no longer a superior nation! In order to get The Grub’s attention out of the WH basement I agree with Atil Hun this way We The People don’t have to pay for Jan. 6th obstruction!

And what is the figure to keep 20,000 plus troops guarding The Grub and weak Congress?
I’m sure we al saw the fat belly’s running through the halls on Jan. 6th. More donuts please we have to look like Jerry Nadler. Talk about a waste of money to pay inept, demented, Democrats $175,000 per year to fill up there Do Nothing Kill America butts!

China & Russia see the weakness. Who will be your next door neighbor Chinese or Russian???

Too bad that Europe has surrendered their sovereignty to Russia in exchange for oil/gas. They have no upper hand in anything Russia chooses to do. At the very least, Russia should have to reimburse NATO for the military response flights.

[…] to American Defense News, the Russians planes were tracked by NATO and intercepted by two Norwegian F-16 fighters on Quick […]

[…] I have previously described here, here and here, Russia is amassing a significant military force in the melting Arctic, and that […]