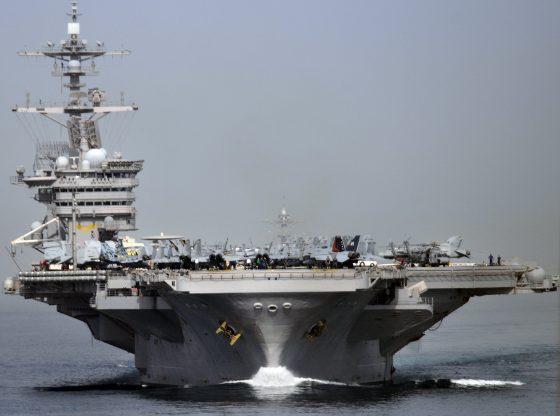 In what appears to be a growing norm, the U.S. Navy recently deployed two aircraft carrier strike groups (CSG) near Chinese-occupied islands in the South China Sea (SCS). The super carriers and their escorts conducted, according to the Pentagon, “dual-carrier operations in the Indo-Pacific in support of maritime security operations and theater security cooperation efforts.”

The carriers are the USS Theodore Roosevelt (CVN 71) which last year was sidelined in Guam for a time due to a major COVID break out, and is the flag ship for CSG 9, and the USS Nimitz (CVN 68) super carrier, which leads CSG 11.

Seeing two U.S. supercarriers together, with full complements of combat aircraft and their escorts, provides a spectacular photo opportunity.

But these images are meant to send a powerful message, especially to China and U.S. allies in the region; the 7th Fleet in the Pacific is fully ready and capable to enforce freedom of navigation through any international waters, regardless of illegal claims by China.

China outrageously claims almost 90 percent of the SCS as its territorial waters despite an international ruling in 2016 discrediting and invalidating that claim. Last July, the Trump administration formally rejected Beijing’s claims as bogus and ramped up Navy operations in the area.

The 7th Fleet is the U.S. Navy’s largest forward-deployed fleet and includes 50 to 70 ships and submarines across the Western Pacific and Indian Oceans. It may soon be complemented by a reactivated 1st Fleet that was proposed last year to focus more exclusively on the Indian Ocean. It would potentially be based at a U.S. naval base in Singapore.

According to the Navy:

The 100,000-ton carriers each carry upwards of 70 aircraft, including F-18 Hornets and Super Hornets, as well as EA-18 Growler radar jamming jets, and E-2C/D Hawkeye AWACS planes, plus several SH-60 type helicopters for anti-submarine warfare and other missions.

I guess they will be closer to their new home port, when Joe sells them to China!

globalists will order china to start a globalist created war and globalist puppet, chester the molester biden wants to make sure the USA fights the war for china .

Joe has to pretend he is tough to China. After he gave permission to sail to the South China Sea, he probably forgot what he did and needed to get a cup of Hot Chocolate and take his nap.
BOBBY ~!~

If China Joe is a good boy, and signs all those E.O.s he cant read, he will get an extra pudding with his dinner tonight!

China Joe Xiden will surrender both carrier groups to China and prove he is a Commiecrat !

GLOBAL COMMUNISM. The New World Order.
Is there anyone out there who does NOT KNOW that this is the Democrat Communist Party’s ultimate objective that they’re trying so hard to keep you from knowing?!
If you do not know this then you are hopelessly low information. The virtual anthem for the New World Order is the pretty little tune by John Lennon, “IMAGINE.” Study up on the lyrics real quick and see how virtually everything the Dems propose is targeted to bringing about this childish vision.
And don’t forget, the Dems are the children in the room, and like the little infantile emotional children they are, they can’t disagree amicably, they can only get back at you. And when they take it to the level of global communism, when they get back at you, it will look very much like the hunger games. Don’t raise your eyebrows, because deep down in your heart you know that’s how it is.

Democrat communists are the children in the room. They are infantile and are unable to disagree amicably. When they get back at you it’s the hunger games. And yes of course they start wars like little kids because it’s fun and interesting and a way of getting a lot of revenue to fund a whole bunch of their eager little dreams.

Yes you are certainly right about that. Like the little kids that they are they have no adults to tell them what to do because if an adult shows up they spank the adult right away with some sort of paddle they found laying around like…oh say, a real fun thermonuclear weapon? You know? And drinks all around after?

Democrats in power.
War is required to boost profits.

Yes you are certainly right about that. Like the little kids that they are they have no adults to tell them what to do because if an adult shows up they kill the adult right away with some sort of weapon they found laying around like…oh say, a real fun Thermo nuclear weapon? You know? And drinks all around after?

OK, so can someone explain to me, it was reported that the drill exercise where the Chinese bombed the Theodore Roosevelt was carried out with “permission” from China Joe. The Commander in Chief answers to China and the Navy sends these carriers to give the impression we’re though against them. It just doesn’t make sense. Who is the Navy following?

with bitten up there, who’s in charge.

In case you missed it, Obama is now in charge through his proxy, “Rice the deliberately invisible” tool!

I don’t know why the US has started considering China as an enemy. For 6,000 years, China was the dominant nation in Asia. Only in the last 200 years did the Chinese Empire falter, and only after Mao died has China been able to reassert itself. We have our Monroe Doctrine asserting American dominance of our local ocean waters. It is only reasonable and fair that China have the same dominance of the China seas.

If you understand communism then you know that the communist mindset cannot process any concepts related to peaceful coexistence. That mindset is ALL, or nothing at all. There is only one state: The Communist State. And there is only one enemy: EVERYTHING ELSE
These days you can see that mindset walking around every day in the form of main stream media and the Democrat party posing as “moderates” so as to fool you Into thinking that they actually care about all that stuff that they dangle in front of you like they’re tender heart for minorities, pretending that they give a darn about the kids or your businesses or your housing or whether or not you have a job? You know, little things like that!
They are actually little kids enough to actually impeach The president when he’s not even a president anymore. Well that’s kids for you.

You are doing a fine job working to perfect your “entry level” Chinese propaganda.

If you want to claim a kinship between the Monroe Doctrine and China’s imperialism, you are clearly wrong. The Monroe Doctrine was a warning AGAINST a colonialistic Europe messing with newly-independent western hemisphere countries. If anything, such a doctrine is necessary as a deterrent AGAINST China’s aggression in the South China Sea.

The US does not claim the Gulf of Mexico as its territorial waters. Have you a clue about the Law of the Seas and China’s spurning of international law? That’s why a Monroe Doctrine is necessary to CONTAIN China.

Do you trust a senile old man to take on China?

did biden send them in close together so China can take them out with land based weapons?

No matter what assets are sent, biden will fold and capitulate. His handlers will make sure of that! I fear his stupidity will get our forces bottled up where they can be hurt badly. biden does not have the mettle to deal with situations requiring “a pair”..