Opinion – Following the third rocket attack against U.S. assets, bases and personnel in Iraq by Iranian-backed militias in a week, on Monday, the Biden administration says it will hold Iran ‘responsible’ but won’t ‘lash out’ in response. That appears to be ‘Biden-speak’ for again not doing anything at all about Iranian-backed attacks against the United States.

Nothing, it seems, will get in the way of Team Biden’s obsessive appeasing of the Iranian terror regime to bring it back to the failed 2015 Obama-Biden nuclear deal, or JCPOA (Joint Comprehensive Plan of Action).

Just days before this attack I wrote about the Biden non-response to the first rocket attack against a U.S. military base on February 15, at Erbil International Airport in the capital of the semi-autonomous Kurdistan Region of Iraq. Then I noted that:

Most experts believe the attack was launched by an Iran-backed militia as a test for Biden. The rockets wounded an American soldier, killed one non-U.S. contractor, and wounded five others. The Mullahs and Islamic Revolutionary Guard Corps (IRGC) in Iran, and as importantly, America’s regional Arab allies, and Israel are awaiting Biden’s response.

I also noted that:

White House Press Secretary Jen Psaki stated that the U.S. reserves “the right to respond at a time and manner of our choosing but we’ll wait for the attribution to be concluded first.” To many that sounds like an excuse for inaction. And that could mean a quick escalation by Iran.

It appears I was right.

While there was no immediate claim of responsibility for this most recent attack, analysts believe it was also launched by Shia militias likely reporting to Iran. Biden’s latest non-response is telling, and is a clear indication to Iran, and America’s allies in the region, that the U.S. will not truly hold Iran accountable for the attacks against U.S. bases – or even its embassy — by its terrorist proxies in Iraq.

Thanks to Biden’s embarrassing inaction, expect further Iranian-sponsored attacks, and even escalation of violence in weeks ahead.

This is exactly what “ king biteme “ would do :
“ Draw a red line “just like Hussein O did and then, nothing !!!!
May God protect our poor solders sent there for no reason anyway !!!!

He can’t tie his shoe and goes to bed early, he doesn’t know how to draw a line on anything. And after all the Iranians are his and Obama’s buddies.

Biden is killing our solders by doing nothing how many more will he let die before standing up to iran.

Why should he do anything. After all, killing Americans and firing rockets at our troops and the Green Zone is part of their cultural norms. What’s good for China must be good for Iran. What an imbecile.

The man currently residing in the People’s House does not possess the wherewithal to make a decisive act to protect Americans. This can also be said of the man occupying the Secretary of Defense’s chair. As a career soldier and 100% disabled veteran thanks to a RPG from a terrorist, I take this lack of response very personally. We have gone from being the strongest country in the world, to a second rate country, who is unwilling to protect its citizens, both in foreign lands and on the domestic front.

As a Nam Vet I agree

I agree and also a Nam vet

My brother is 100 percent disabled from agent orange from the Democrat war in Vietnam, spent 26 years in the army and still suffers from PTSD. He wonders why the military has not relieved the illegal Biden administration of their duties, if for nothing more than just not taking care of American citizens, this failure to protect America’s interests is just another failure not only of leadership but failure of taking care of the US under the oath he supposedly took on January 20th.

Joe B
Reply to  Kimberly

I agree as well. I am also 100% disabled from agent orange and suffer PTSD to this day as well. Biden is a disgrace period!

James B Jacobs
Reply to  David

What will the other countries that hate America do if Iran gets away with attacking our facilities, they will probably try the same. They were afraid to with Trump because they knew Trump would do what he said he would do. He proved that with Iran.

Coming soon to a American city near you

At least this old dog won’t bit the hand that lines his coffer and soon to be coffin.

So it sounds like Kerry isn’t doing his job. He was over there, he’s buddies with them. Why did this happen?

Because he’s buddies with them !!

Kerry can’t do the job, he is compromised, his daughter is Married to a Muslim with known ties to Islam, he is just another traitor in the Dementiacrats party .

Must be taking advice from Benghazi Hillary. American lives and status are expendable.

That is exactly their thinking : American lives are expendable!!!
At this point, what difference does it make , right,
Hillary ????

Biden is a puppet, he’s not making any decisions they are being made for him. The democrats are already trying to make a case to remove him so the real communist can become president. Which I hopes and prays never happens.

Can we just throw this demented pedophile out of office and get our old president back please?

Unfortunately, this demented pervert will be soon replaced by another pervert .. also demented, but in a different way !!!
Hard to pick any sane one from the WH or from DC nowadays….

Tell the generals in the pentagon to get their heads out of their a** and do their duty under the constitution they took an oath to. All military members and veterans know the oath I speak of, to protect the constitution and our republic from “domestic terrorists” which the democrats and the Biden admin became when they cheated on the election and were then sworn into office knowing they cheated to do so. The constitution gives the military the right to protect our republic, they need to do it now!

that’s what Obama always said go figure who is running this country?

Trump would have already busted their chops big time. He did not put up with the destruction of U S Military, Embassies or personnel. Biden is a woos.

King biteme might be a wood as well, but first of all he is a marxist and he will just follow their agenda of destroying America and “ reset it “
They already told us this is their goal , right ?

He is a WUSSIE We need to get Trump back in the White House.

I have 2 sons who are junior officers in the Marine Corps.
Both have resigned their commission. Not interested in getting killed by Pedo Joe. 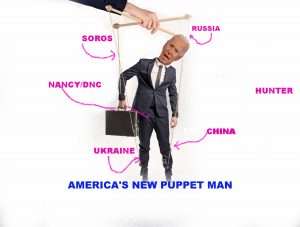 Tell the generals in the pentagon to do their job and correct this error and put the real winner into office where he belongs.

i don’t think so

Looks like we’ve been sold out–America has been bought and paid for.

The people know this, which is why at least 75 million, and maybe as many as 100 million, voted for trump and maybe 59 million voted for Biden, 1/4 of whom have buyer remorse.

What do you expect from an anti American and anti military administration. They don’t care about the United States and what it stand for. Check their bank account and see how much Iran or China paid them to not do anything.

America is so weak now with Biden in office…Bring Trump back!

Our military had the opportunity on Jan 6th to stop Dictator Biden from taking office, but did nothing to protect America from Democrat Domestic Terrorists!

or our supreme court Prep

Biden took an oath to protect us .He failed and should be impeached for his willingness to sacrifice Americans for his desire to be friends with our enemy. His lack of response will invite more attacks and is therefore, treasonous!!

He wants to appease the military/industrial complex that financed his presidency. Top brass loves war and industry loves to get rich off providing weapons.

JOE BLOW IS A TOTAL FAILURE AND WILL BRING AMERICA DOWN INTO THE DIRT. BUT LET PERVERT JOE BLOW PUT HIS FILTHY HANDS ON MINORS IS OKAY AND TOTALLY LEGAL FOR THE SICK WORTHLESS PERVERT.WHAT A CHOICE PEOPLE MADE FOR PRESIDENT. WHAT AN EMBARRASSMENT FOR TRUE AMERICANS. WE ARE ON THE ROAD GOING BACKWARDS, BUT ITS ALL IN THE BIBLE. AND FOR THE EMBARRASSING BULL CRAP ABOUT THE SICK FAGS & LESBIANS GETTING SOME KIND OF EQUAL RIGHTS , I WILL REMIND THE PERVERT, AND ALL THE FAGS & LESBIANS WHICH ARE AN ABOMINATION TO GOD , THAT THAT WAS THE VERY REASON GOD COMPLETELY DESTROYED SODOM & GOMORRAH FOR THEIR PERVERTED IMMORAL SEXUAL BEHAVIOR. I HOPE GOD WILL DESTROY ALL OF YOU SOON AND SEND YOU STRAIGHT TO THE LAKE OF FIRE AND BURN AN EVERLASTING TORMENT, REMEMBER THERE WILL BE NO WATER TO QUENCH YOUR THIRST OR YOUR SUFFERING OF THE FIRE THAT AWAITS YOU , YOUR FRIEND THE DEVIL IS WAITING FOR YOU ALL. DONT EVER SAY YOU DIDNT KNOW.

Hidenbiden has been compromised by the terrorist mullahs, and doesn’t have the stomach to offend them. He is as gutless,spineless as the repukes, unfortunately he isn’t working with a brain, but a fairy table, this genius is a danger to all of us,he to stupid to be making any deals with killers.

Biden doesn’t want Iran coming out with details on how he undermined President Trump before he was elected President and deals he made to have them interfere with the election. He now owes them … as well as the Chinese.

The Pentagon demands Republican Josh Hawley’s resignation? Why? He’s one of the REAL Republicans in Washington D.C. The Pentagon has been taken over by Clandestine Communist Operatives not seen since Nazi Admiral William Canaris.

Oh, he passed the test, now Iran and their proxies know what they can get away with. Lord God help us all.

now some in his own party want to take the nuke codes away from him! i don’t know why as he wouldn’t remember them anyways!

How that all this was said we still don’t know what happened. Was any body killed ? What was the damage ? What Happened ?

get this fraud out of the white house and phony too

Well…it wasn’t on his teleprompter…so there.

What to do with treason of Democratic honchos I do not know. Maybe the lawyers and courts, as long as they are not under Democratic party (almost impossible with FBI and crooked media on their site) would know, which is good for nothing as far not much is done by GOP. But I know that under Soviet Communist regime, they all would be shot long time ago, with questions (maybe) asked later. By the way, that communism/socialisms is what the Dmocratic Party wants? Does somebody believes them? I do.

[…] Earlier Team Biden had said they would not ‘lash out’ after another Iranian-backed militia rocket attack against the U.S. embassy in Baghdad. As I wrote, […]

Joe biden needs to read some history about what happened to our embassy officials when Jimmy carter and Ronald Reagan were our presidents. Joe has to be old enough to remember but obviously he isn’t strong enough to take any action or just doesn’t care.

[…] Republicans have criticized Biden’s weak response to the escalating Iranian-backed attacks in Iraq, as have I here and here. […]