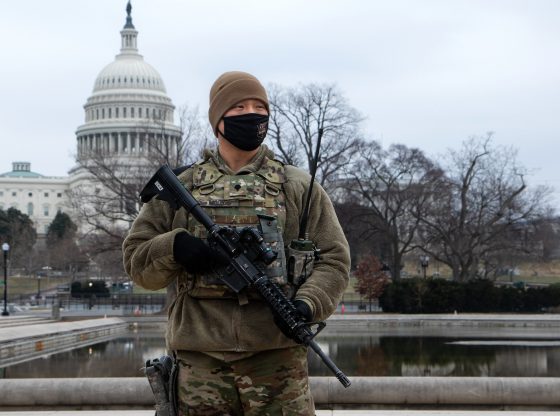 ANALYSIS – The violent riot at the Capitol on January 6, and the failures leading to it, as well as the militarized overreaction afterwards, deserve an independent and bipartisan investigation akin to the 9/11 Commission. Americans need to know what exactly happened and who failed. And, as I have written earlier, they also need to know what justified the response afterwards.

But Americans also need to have faith in the integrity of the commission and investigation itself.

None of this will happen if Democrat Speaker of the House Nancy Pelosi insists on forcing through a partisan sham inquiry run by a majority Democrat Commission. But this is exactly what Pelosi appears to be doing.

According to CBS News, “Democrats are proposing a structure for a commission to study the January 6 attack on the U.S. Capitol that will allow their party to appoint the majority of the commission’s members…”

…House Speaker Nancy Pelosi, House Minority Leader Kevin McCarthy, and Senate leaders Chuck Schumer and Mitch McConnell will each get to appoint two people to the commission. President Joe Biden will get to appoint three members, including the chair, the aide said. That would allow Democrats to appoint seven commissioners and Republicans to appoint four. [emphasis added]

If this plan is followed, it would make a farce of the investigation, guaranteeing a partisan whitewash of Democrat failures, and make the inquiry itself a failure. As House Republican leader Kevin McCarthy said in a statement last week – Republicans and Democrats should have equal say in appointing the commissioners, as was the case with the commission that studied the September 11, 2001 attacks.

It is our responsibility to understand the security and intelligence breakdowns that led to the riots on January 6 so that we can better protect this institution and the men and women working inside it. A commission should follow the guidance of [9/11 commissioners] Tom Kean and Lee Hamilton to be ‘both independent and bipartisan’, and to preserve that integrity it must be evenly split between both parties.

In order to achieve this laudable goal, Congressman Rodney Davis of Illinois, the top Republican on the House Administration Committee, drafted a proposal last month to create a commission that would have 10 members evenly divided between both parties. This is the path Congress should follow.

But Pelosi hasn’t stopped at simply trying to pack the commission with partisan Democrats. She has also been harshly criticized for tasking the highly partisan retired Lieutenant General, Russel Honoré, with reviewing Capitol security in the wake of the attack.

Republicans are outraged by his offensive and unprofessional public rants directed at various conservative Congressmen and Senators, as well as Capitol Hill Police, all before beginning his review.

The Washington Examiner reported that Sen. Ron Johnson, a Wisconsin Republican, called Honoré an “extreme partisan,” saying on Twitter that the retired general “should be the LAST person to head up an investigation of what happened at the Capitol on Jan 6th.”

Keep Pelosi away from this or it will be compromised in favor of the Dems. Each party should have equal representation or do not have this commission.

Rick, there is no ‘keeping Pelosi away” from this. She’s already right in the middle of it.

For the welfare of our country, that woman needs to be kept away from everything! She is toxic!

Yo ho
Reply to  Rick

The protest was pro trump the violence such as it was (pales in comparison to I’m and real antifi riots )(who were there but on orders to just instigate by the dems) the murder of the vet was the real story that capital rent a cop is under wraps by the left.

TRUTH is not a democrat’s long suit. Democrats shy from truth like Dracula’s avoidance of Sunlight–

It can’t possibly succeed because success would mean laying the blame at Pelosi’s doorstep.

No doubt her “committee” has specific instructions about the outcome she expects, and her little minions will follow orders! She has never applied objectivity to a thing she has done. She rules by emotion, and her ruling emotions are the hate and anger that she holds for our good President Trump because he beat their queen Hillary, and upset their socialist/communist apple cart!

Cash girl!
You are being too kind !Pelosi doesn’t rule by “ emotion “ , she ruled by the “ communist manifesto” !
Let’s go look at the speeches held by Stalin, Mao, Chavez, Castro etc …
They all use “ key words “ like : “our opponents are being a treat to our democracy”,
or : The rich are getting richer( of course they don’t talk about themselves), or “ white supremacy “, “white privileges”, income inequality, racial justice … etc … exactly the same kind of talk that Chavez used in Venezuela to brainwash the young generation and all the rest of the sheeple, then Maduro is
being using the same key words so , this is how they destroyed Venezuela in less than 10 years …. government control on healthcare, on
economy, housing, everything.
It’s called “ divide and conquer “… this is how communism works and this is their agenda !!!
This is how Pelosi, Schumer, Nadler, Schiff, Bernie, Hussein O , Clinton AOC and all the rest of them are desperately trying to push down our throats.
We just have to remember one thing :
Ones they get all the power and control of the government, they will NEVER EVER let it go !!
Let’s stop planning on future “ elections “
During the communist occupation of most of the European countries, the population was forced to go to vote and every single time , the
President was re-elected with 99% of the votes, until they decided to “ propose” to have him nominated president for life !!!
( China, just one example)!
Let’s just look at Venezuela… the opposition is being harassed, put in jail, getting death threats… we are almost there !!!!!

Ok just do it

Another total waste of time and money by the radical Democrats. They need to pack everything. It’s the only way they can win. Sooner or later this country is going to blow up. We will see who’s left when the dust settles.

So right. If Pelosi is involved it’s all a lie.

With the fake news reporting about a natural death being caused by being hit with a fire extinguisher—I simply can’t see this (?) investigation being anything other than a Soviet style SHOW TRIAL.

Everything that’s going on coming from Pelosi and the rest of her comrades is nothing but KGB style, or even the Chinese style …. lies, deception, censorship, harassing their opponents or even putting them in “ “ re-education camps” ( we heard that on MSNBS, CNN , )also the genius AOC and the other comrades of her proposed to make up lists with Trump supporters …
Does this sound like America anymore????
Let’s wake up people, we’re getting very close to becoming the United Communist State of America…..

No matter what a “commission” says, it will be a farce…

Pelosi has never been impartial, she should never be included on these committees.

Doesn’t anyone get it yet? Pelosi doesn’t want answers , she wants another Democratic Witch hunt! Her commission will leave out any Democratic party wrong doing, leave out who ordered security relaxed,( knowing a attack was planned ), who refused the help of the National Guard, and so forth. This commission will focus on what they believe to be Republican led groups only !

She needs to be fired! Who can do that!

If the democrats get anywhere near this commission it will devolve into nothing more than a witch hunt.

A lot of don’t believe for a second that the
“sniffer” this corrupt pervert ever got 80 million votes !!!!!
The election was stolen, everything was pre planned, step by step by using the virus crop and this is how they got away with ignoring all the laws and regulations about the voting system.

The voting was “ allowed” to take place just like they do probably in Bangladesh, or some country called … Guru – guru , that no one ever heard of .

Constitution didn’t mean anything, the local authorities were forced to close their eyes, the Supreme Ct, was also forced to do nothing, and of course the media, as usual, did exactly what the
communist party’s propaganda news called Pravda was doing in Russia …
so, a lot of us will never , ever trust anything coming from this corrupt crowd called
“ democrats “ ( which has basically turned into a marxists party ) … with the help of Antifa, BLM which gets financed by these crooks to begin with!!!

No military needs to be around the White House these communist just want to make things worse here in America and the military are defenders of America the American Constitution as Written the American People not the government that is traitors to America, these communist criminals politicians all need arrested and kept in solitary confinement till court and only by Constitutional Judges not these vile criminals leftist communist judges

The democrats SET UP the invasion of the capitol three weeks before it happened. They knew that the patriots were coming to D.C. and used them as patsies to blame for the invasion of the capitol and also LIE and say that President Trump told them to invade the capitol. Actually the D.C. police allowed antifa and BLM to enter the area in front of the capitol and they are the people who broke into it followed by some not too bright patriots. It was all a perfect SET UP by the democrats so that they could blame the patriots for the break in and then LIE and say that President Trump told them to attack the capitol. Of course the democrats comrades in the LYING CORPORATE PRESS have repeated the democrats LIES often enough so that every person who receives their anti Trump brain washing from their TVs will believe the LIE!