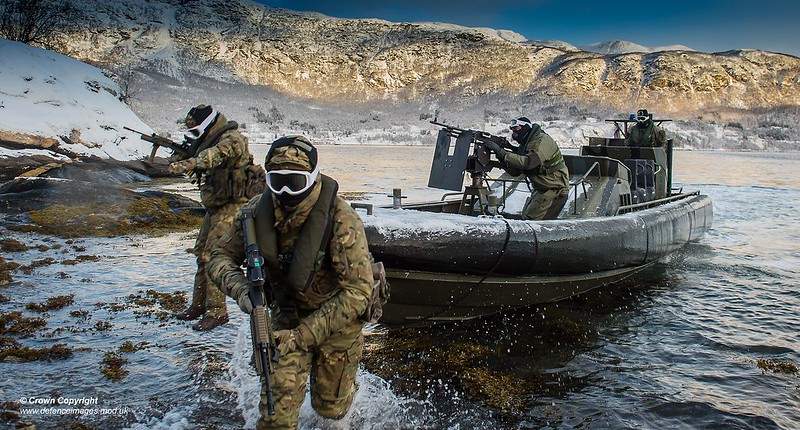 COUNTERING CHINA – Great Britain is basing the Royal Navy further East into the Pacific to be prepared for a shooting war if needed. As part of this strategic shift, the Navy’s flagship aircraft carrier, HMS Queen Elizabeth will sail through the South China Sea on her maiden voyage later this year.

According the The Sun, Vice Admiral Jerry Kyd said:

We are building a Navy to be out on the block, out on the beat, in an era of persistent competition. When deterrence fails, we can go to a shooting war very quickly indeed.

Adding to this new China focus to help counter China, the Royal Marines will be given expanded roles in ‘commando’ missions such as sabotage and deep reconnaissance. Admiral Kyd explained that “Special Operations is not now just the preserve of special forces.”

“We’re putting the vim back in the commandos to cause mayhem behind enemy lines,” he said, reported The Sun.

In the mold of the U.S. Marines’ new focus on small unit, dispersed expeditionary warfare I have written about, Brigadier Tony Turner, deputy commandant general of the Royal Marines, explained that small bands amphibious troops would use “strength and guile” – the motto of the Special Boat Service – to “cause problems for our enemies.”

I spent some time with 42 Commando Royal Marines in the 1990s. And in addition to competing with the Royal Dutch Marines for title of oldest Marines, and serving as the model for the U.S. Marines, the Royal Marines are one the world’s best band of amphibious warriors.

As a highly specialized, elite light infantry force, the Royal Marines are trained for rapid deployment worldwide. Their motto is ‘Per Mare, Per Terram’ (From Sea and Land). They are organized into a light infantry brigade (3 Commando Brigade) and a number of separate units, or battalions, including 47 Commando (Raiding Group) Royal Marines, and a company strength commitment to the SpecialForces Support Group.

3 Commando Brigade is the main combat formation of the Royal Marines. Unlike the U.S. Marines which have combined arms capabilities integrally, the Royal Marines need to be augmented by units from other military branches. 3 Commando therefore consists primarily of Royal Marines, but also includes units of Royal Engineers, Royal Artillery, and the Fleet Air Arm, along with other ‘Commando’ qualified troops from all the forces.

Like their U.S. cousins, the Royal Marines operate in every ‘clime and place’ with expertise and training on amphibious warfare, arctic warfare,

Admiral Kyd added that “Commando forces are being developed, allowing us to save the highest end troops for the most demanding operations.” This will allow Britain to preserve its top-tier special operators – the Special Boat Service (SBS) and Special Air Service (SAS) for highly specific missions.

The SBS is somewhat similar to the U.S. Navy SEALS, while the SAS is the ‘godfather’ of the U.S. Army’s Delta Force.

And here in the3 US we have Beijing Biden squatting in the White House. Reality is more surreal than “1984”.

Capitan…I think Biden will be on holiday…in about three moths, tops!

Herbert G. Chapman
Reply to  Will

I think it might be about March Fifteen 2021. My guess.

We all know by now the real reason why our government wanted to send all our jobs to China and why our Colleges brought the Chinese children to the U.S. so they could build more armament to hold us captive.

Given the quantity of the PLA, the best counter is quality at the necessary quantity. The US doesn’t have it, particularly in area of maritime SOF and civil/combat engineer. Good to see the UK is meeting our requests for support.

Good to hear that the British are taking preemptive action for battle readiness, in case they need to deploy. As Ronald Reagan wisely said, “We can only have peace through strength.” Only good and wise leaders prepare for enemy attacks and aggression, making all provision to live in peace, but always ready for combat if need be. God bless the British soldiers.

I am glad that the UK is our ally. They are not only taling over the South China Sea, they have also bought an island off the coast in the Gulf of Fonseca, El Salvador. This is strategic as it has access to El Salvador, Honduras and Nicaragua. After a win by the NI party in the parliamentary elections, it is imperative that the USA take notice. We are worried that NI and Bukele is another Maduro.

At least England is stepping up while Biden capitulates to the Chinese communists.