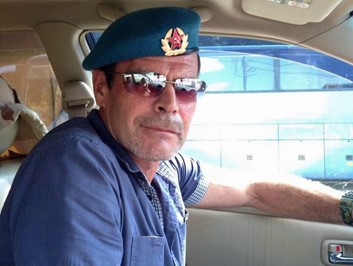 Marat Gabidullin is seen in an undated photo from his Facebook page.

According to a recent interview given by a former member of Russia’s ostensibly private military company (PMC) Wagner Group, the organization, which is linked to the Russian Military Intelligence Service (GRU), is brutal, corrupt, and incompetent. Wagner is used by the Kremlin to intervene in hotspots where Moscow wants ‘plausible deniability.”

Though this Wagner-Kremlin deniability is becoming increasingly ‘implausible.’

The former commander of a Wagner infantry reconnaissance company, Marat Gabidullin, was earlier a paratrooper in the Russian Army. He joined Wagner in 2015 and fought with Wagner in Syria. Partly disenchanted with the group’s treatment, he wrote a book about Wagner in 2017, titled In the Same River Twice.

According to VOA News, Gabidullin said he “wrote the book in part to push the Kremlin into acknowledging the group’s existence, as well as the deaths of its fighters, who receive neither military funerals nor posthumous medals. Around 300 Wagner fighters are believed to have been killed or wounded in a firefight with U.S.-led Kurdish forces in Syria in February 2018.”

The book’s publication has since been suspended in Russia.

In an interview with Medusa, an independent Russian web publication, Gabidullin revealed how Wagner’s owner, plutocrat, and formerly, Russian leader Vladimir Putin’s chef, Evgeny Rogozin was often unaware of what happened in his own company, notes SOFREP.

He also explains how Wagner’s military commander, Dmitry Utkin, previously a special forces lieutenant colonel in the GRU, ordered his men to commit a war crime during the bloody Syrian civil war; brutally torturing a Syrian deserter; a crime that was filmed and widely distributed on the internet.

Gabidullin also claimed that Wagner members looted antiquities from Syria, including the historic site at Palmyra, where he was seriously wounded in 2016. He stated:

In the headquarters at the [oil plant in] Khayane and at the Tankodrome [PMC base], for example, there were ancient stones that we had taken from Palmyra…. I once occupied a room where there was a [chipped] bas-relief on a shelf. They chopped off, I think, from the upper platform from one of the columns — and there [on the bas-relief] some signs were depicted — perhaps writing [graffiti].

Beyond the brutality and corruption though, Gabidullin paints a picture of an increasingly demoralized and incompetent force. Gabidullin says that in the early days, the bulk of Wagner recruits were Russian military veterans, but that more recently it has had difficulties in enlisting professional soldiers. Instead it is taking in recruits with little or no military experience.

According to SOFREP, he “told Medusa that Wagner is no longer attracting professional Russian soldiers in its recruiting efforts. Instead, they’re taking recruits with little to no practical experience and commanders that aren’t up to the jobs they’re given.” Gabidullin said:

People who got to smell gunpowder in Chechnya or during the Georgia War are no longer striving [to join the Wagner PMC]. And it turns out that more than half of the personnel are [at war] for the first time.

In 2015-2017, Wagner’s [Dmitry Utkin] led a squad of gladiators — now he is leading an army of slaves… Most of the commanders absolutely are not up to the level of their positions. And the veterans who still remain in this formation have made up their minds: ‘The main task is to survive…They aren’t thinking about victory anymore.

Gabidullin’s book has suspiciously been pulled from the printing presses, reportedly at Gabidullin’s request, according to Siberia-based publisher Nayemnik, notes SOFREP. But this follows numerous allegations in pro-Kremlin newspapers that his memoir contains “inconsistencies and falsehoods” – a sure way to get anything censored in Putin’s Russia.

This is also a good way to get censored today in the United States.

I just love how people love to sit back, down a beer while whining and moaning over the crap going on today!

I strongly urge everyone who reads this to PICK UP THE PHONE and call your REP AND SENATORS in DC and DEMAND a COMPLETE AUDIT AND INVESTIGATION into the 2020 ELECTIONS and for the IMMEDIATE IMPEACHMENT OF BIDEN AND HARRIS.

Censorship in any form is a symptom and sign of a communist/socialist state. In America, it’s a violation of the first amendment of the U.S. Constitution which protects your God-given right to free speech, assembly and the press. Reminds me of the recent move by Amazon and Target removing books that they deem controversial because of PC, political correctness, to silence dissenting voices, like books about the Transgender movement, which is only a cultural movement based on Cultural Marxism based on men like Herbert Marcuse, a student of the Frankfurt school of thought. In the 1930s at the Frankfurt Institute of Social Research, a new ideological way of thinking and understanding societal power structures quickly became a feeding ground for worldviews like Marxism. These worldviews analyze society through a lens of oppressor and oppressed, viewing any means of authority as the object of potential oppression. By infiltrating and marching through the institutions (education, universities, government, big business, many churches through critical race theory, etc.), these ideas transform societies and nations into a Marxist worldview which is a direct contradiction to godly, biblical truthful values as ingrained in the authoritative Word of God, the Bible. God bless.

Censorship is a strategy used by repressive nations, regimes and like today by Big Tech monopolies. It’s just a way of suppressing free speech, freedom of thought by the thought police. Remember, socialism (like USSR, United Soviet Socialist Republic, Nazi, National Socialism) erode nations little by little, by slowly making you conform to their image and ideology until it’s too late. Remember, Germany’s population, many of them, very nice people, were very much misguided about the nature of man and his potential for abuse of power. Socialists are always the useful idiots for the Marxist communists who eventually transform a nation to their agenda. Winston Churchill said it quite wisely, “Socialism is the philosophy of failure, the creed of ignorance, the gospel of envy and the equal sharing of misery.” Our liberties come from God and no man should be able to take that away. As Edmund Burke said, “The only thing necessary for evil to triumph is for good men to do nothing.” Ignorance is not bliss. God bless.