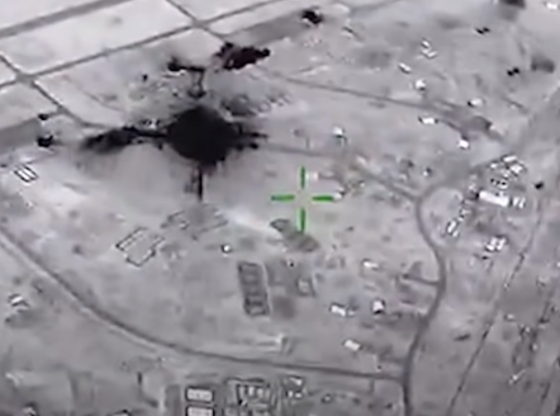 Iran reportedly used commercial satellite imagery to target the U.S. military base at al-Asad Air Base in Iraq during last year’s reprisal attack for President Trump’s drone strike against Iranian terror master Qassem Soleimani. The CBS 60 Minutes TV news reported how Iran tried to use commercially available satellite imagery to monitor and then attack the base with a barrage of ballistic missiles days after the Soleimani strike.

According to C4ISR.net, “McKenzie waited until Iran had purchased its last satellite image of the day before evacuating the base, ensuring that Iran was acting on out-of-date images, he said in the interview.” McKenzie also explained: “If you go too early, you risk the problem that the enemy will see what you have done and adjust his plans.”

This, and other early intelligence that an attack was imminent, combined with a critical early warning from the Space Force’s missile warning satellite system, however, ensured a far different outcome.

Instead of a deadly attack, noted C4ISR.net:

…the missile attack damaged the base, equipment and a helicopter, and 110 people had to be treated for traumatic brain injuries. But no one was killed…

It is unclear which satellite imagery provider Iran used to obtain the images, or how and when the U.S. military knew Iran was purchasing the images of the base.

For now, at least, it appears the U.S. intelligence community and Pentagon still have the upper hand.

OBAMA GAVE IRAN 1.7 TRILLION LESS KICKBACKS SUPRIZED IRAN DOES NOT HAVE THIER OWN SATELLITE! CLINTON SOLD IRAN URANIUM FOR BOMBS TO KILL OUT MILITARY. WORRY ABOUT WHAT HAS CROSSED OUT BOARDS ALL READY HERE!

Pray for those in leadership in U.S. Intelligence to thwart the attacks of the enemy in advance. Eternal vigilance is the price of liberty in an ever growing and connected world because of complex and advanced technology. May those in U.S. Intelligence be one step ahead of the curve and have the courage and resolve to act swiftly when needed and remain steadfast in their task of national security. God bless.

SO NOW ATTACK IRANS SATTILITE PROGRAM AND LOCK IT OUT OF THE COMMERCIAL FREQUENCY!

Why is anyone allowed to purchase this info from America?? Does the government just want our bases and soldiers to be attacked ??? For Heavens sake, how stupid can you Government & Military Officials Be!! Shame on you all!!!!

Maybe they want it for sale so they can monitor the sale and evacuate the base when the last image was bought. Sort of gives you the upper hand. Not so stupid.

C’mon man! Now, they have someone in the WH with ‘brain trauma’ with Nurse Ratched, in tow, as well…?

The U.S. had to use National Geographic maps during the early part of World War Two because they were more up to date and accurate than the War Department’s maps.

Is our satellite information on the net, floating around for any tom dick or prirck to use? Mapping by hacking, targeting by hacking, we got to stop this crap.

Here is proof of the sell-out. we knew of how they operate and the administration did nothing to prevent it. COST America many lives which was preventable. This administration, through ignorance and stupidity is willing to sell this country just to fatten their own pockets and positions, the Citizen be damned!