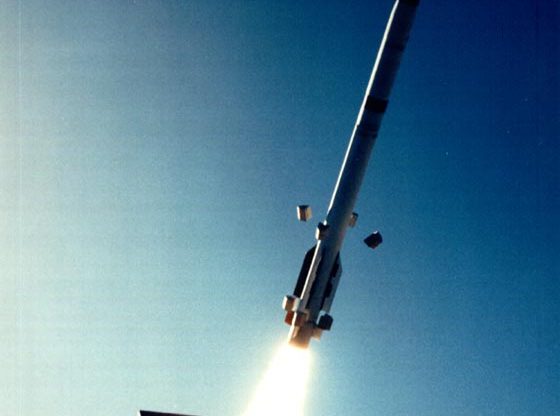 The most recent rocket attack on U.S. forces in Iraq by Iranian-backed militias killed a U.S. civilian contractor. Al Asad Air Base in Iraq was reportedly targeted by approximately 10 short-range rockets on Wednesday, however a defense official said that the U.S. artillery defense system in place at the base intercepted three to four of the rockets.

According to Stars and Stripes, “Al Asad’s Counter-Rocket, Artillery, Mortar (C-RAM) missile defense system ‘engaged’ with the incoming rounds, and early assessments indicate it hit three or four of the 122mm rockets, the official said on condition of anonymity.” The paper added:

There were 10 known locations where the base was hit, the official said, and it was not clear if more than 10 rockets were fired, or if the rockets that were struck down by C-RAM were responsible for some of the ground damage.

Initially, the Pentagon said they were still investigating who was responsible for the attacks, with President Biden pledging to identify the attackers and hold them responsible.

Since then, however, U.S. and Iraqi officials have said, according to Politico, that they believe that an Iran-backed militia group with a history of targeting Americans in Iraq – Kataib Hezbollah – or an affiliated group was responsible for Wednesday’s attack.

Republicans have criticized Biden’s weak response to the escalating Iranian-backed attacks in Iraq, as have I here and here.

Most recently, Senator Bill Hagerty (R-Tenn.) blamed Tehran for the attack in a Tweet, saying it had “all the hallmarks of the Iran-backed militias,” while adding: “The Iranian regime seems intent on attacking Americans at the same time the Biden admin wants to give Tehran sanctions relief.”

Yesterday’s attack is an example of why it is crucial not to relieve sanctions pressure on the Iranian regime unless the regime ceases its terrorism and other threats to Americans.

But now even prominent Democrats are now joining the chorus of criticism.

Politico reported that Senator Bob Menendez (D-N.J.), chair of the Senate Foreign Relations Committee, said on CNN that to his knowledge, the attack was carried out by Iran’s ‘surrogates in the region.’ They have given them green lights to make these types of attacks. There have to be consequences for that.”

Still waiting for what that Biden response will be. Dropping a few bombs on a militant “tea-stop” in the Syrian desert didn’t seem to do the trick.

When Biden attacked Syria he did not tell Congress or even Herris before doing so. He did however tell Putin. Biden didn’t deliver on his promise of $2000 checks to hurting families or free tuition to students for their votes. That should be reflected the next elections when the Democrats again try to buy votes. Biden has told us that we should just learn to accept the eradication of Ouighir Muslims in China. Two days ago the courts in China ruled that homosexuality is a mental disorder. Are we supposed to just learn to accept that too?

biden was long expected to be a pansy. No disappointments yet.

Biden is like the little boy in the school yard that gets punched in the face by the school bully and then apologizes for getting his face in the way of the bullies fist. A complete coward.

Yup. Old lunch bucket, tough guy Joe is here to protect all of us. Realizing it was a couple of days ago, but does Idiot Joe even remember?
Perhaps Joe could load up a C-130 with gold and deliver to Tehran – maybe that would appease them for a week or two…
I would believe by now that at least half of the 63,000,000 who voted for Lyin’ Biden are embarrassed and wish they could change their votes.
God Bless the United States of America

He could challenge the mullahs to a push up contest.

The entire world will be in danger so long as the communist left infests the United States Government.

Hmmm. Didn’t react to President Trump like this. The Iranians know when we have a demented idiot in office and how to take advantage of it. He will have us in an all out war before long. Happy now, Liberals?

Don’t you think that they are fully aware that CP plant former POTUS “O” is really doing the directing in the WH now?

I guess the Biden Socialist Regime needs to make another attempt at telling Iran to stop being naughty, or they will draw another Red Line in the Sand, I’m sure there are few leftover from the Obama Socialists Regime.

He should just tell them to “cut it out”. That’s the ‘tough’ Obama way.

With vermin like Kerry infesting the evil Biden administration, we can expect to see Iran become a nuclear power, and a threat to start new Moslem invasions and genocide around the world.
Already the evil press hides the news of the genocide by Azerbaijan and Turkey against Armenia, where only Russia provides protection to Christian churches and cathedrals.
Please join me in prayer that God strike down the domestic and international enemies of One Nation Under God.

I strongly urge everyone who reads this to PICK UP THE PHONE and call your REP AND SENATORS in DC and DEMAND a COMPLETE AUDIT AND INVESTIGATION into the 2020 ELECTIONS and for the IMMEDIATE IMPEACHMENT OF BIDEN AND HARRIS.

Just undo the wrong and get rid of that idiot and reinstall TRUMP as the real PRSIDENT, GET RID OF TAHE SOCIALLIST harris. Just don.t let harris antwhere near the president’s desk’ I don’t want to live under sociallism

President Trump had no problem dealing with situations like this, perhaps because he was a better President. America needs him.

As history gives witness, a policy of appeasement does not help. Easing up sanctions …. not a good idea. I hope President Biden consults with some of the neighboring countries and maybe get some better foreign advisors in his cabinet. Pray for the best.

Amazing, a politician that meets and even exceeds our expectations, even if it was for incompetence….. oh wait…. sorry. To be an actual politician I believe he needs to be duly elected by real live voters; ones that actually exist somewhere other than as names on a ballot and even ones that are real citizens. My mistake, never mind.

wait a little longer and slow perverted joe blow will be on the sidelines, and the crooked dual criminals , “wrinkles”, pelosi & partner in crime “utanga” harris will lead the show , while joe will be the waterboy and obamas puppet as he has always been. how detestable these leaders are. there should be a law of presidents having 1 foot in the old folks home and 1 in the grave. at least President Trump had both feet in the White house and called the shots, not obama. a bunch of worthless c–k sucking bastards

Do you think that one who has cheated and lied may be fooled by another who is a bigger cheater? Killed an American, he don’t care.

Dear GOD, Please help us and save us.

Appearances are everything in the political world of illusion and propaganda. Iran backed militia groups are simply stepping up attacks now in order to make it APPEAR as if they are responsible for forcing the concessions and lifting of sanctions on Iran that they believe are likely to happen soon, now that there is another short sighted, weak willed, soft on crime democrat in the White House. These Iranian backed militias want to bolster their reps and try to to take credit for the coming “success against the Great Satan America” and blah blah blah. Familiar tribal thinking & bragging patterns to those who pay attention to such things.

No surprise here, democrats back in charge, terrorists go back to killing Americans.

Biden is sooo weak, only matter of time until we pay severely here in USA!! Be cautious and stay safe people!!!