US Admiral: China’s Million-Man Propaganda Army Fights to Subvert US – America Needs to Fight Back

US Admiral: China’s Million-Man Propaganda Army Fights to Subvert US – America Needs to Fight Back 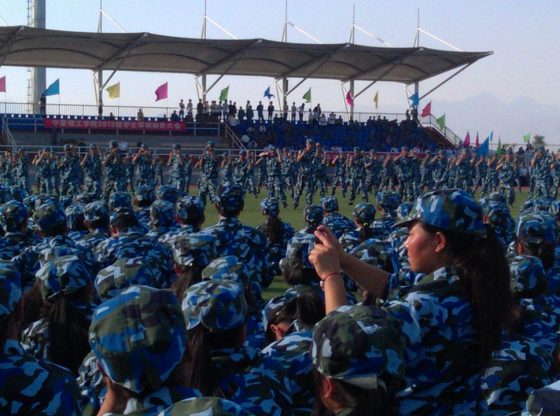 Despite all the talk of Russian disinformation efforts, the Commander of America’s Indo-Pacific Command (INDOPACOM), Admiral Phillip Davidson, just informed Congress of China’s “vast disinformation machine” with a million people behind it, that dwarfs any similar Russian effort. This massive machine is fighting to subvert the United States and other democratic systems.

As Newsweek notes, China is using this army to “Beijing works to divide Washington, D.C. and its Asian allies and establish hegemony in the Pacific.”

Admiral Davidson added that Beijing’s goal is “to undermine U.S. interests, to capture the narrative to their own benefit and to…corrupt the environment in a way that creates doubt amongst our allies and partners in the reliability of the United States.”

While Russia is certainly engaged in significant disinformation efforts to undermine democracies and rivals worldwide, Davidson said Moscow’s tactics differ in acting “much more like a spoiler.” Russia works to “deny the visions” of rivals, says Davidson.

In contrast, the Chinese strive to malign its democratic, western rivals and laud its own authoritarian, “communist” system, Davidson said.  More concerning is that China’s subversive propaganda efforts have grown exponentially in recent years. Newsweek explains:

…concerns about such operations have deepened in recent years as Beijing increases its media output around human rights abuses in Xinjiang, Hong Kong, Tibet and elsewhere; trade disputes with the U.S.; territorial tensions along the border with India, in the South China Sea, and around Taiwan; and the coronavirus pandemic.

COVID-19, in particular, prompted a broad disinformation effort by the Chinese Communist Party, which sought to dodge blame for the pandemic’s spread beyond Chinese borders and malign the efforts of its rivals, especially Europe and the U.S., to handle the virus’ spread and subsequent economic dislocation.

China’s disinformation efforts are an element of Beijing’s plan to dominate Asia, Davidson said, displacing the American hegemony established after the Second World War. The U.S. is increasingly looking to Asia as the next theater of great power competition, with successive presidents putting more emphasis on and resources into the region.

No surprise, and we have a president who is selling us out to China. What could go wrong?

Shelley – Biden and his family GOT PAID PLENTY to sell us out!!!!! The sheep do not
realize it!!!!

but, but, but 80,000,000 + Americans voted for these frauds. Biden and Kamala! Where are they??? They seemed to have vanished into thin air or did they ever exist? You be the judge!Hmmmmmm!

Pissed Off America
Reply to  Nrr

Don’t think for a minute that millions of those votes were legitimate.

Not really. Biden said he had the most extensive fraud ever set up and proved it to be true..

Paper ballots cannot reply! Can you believe there were lots of counties that counted MORE votes cast than there were voters in that county! They still say there is no evidence…..🤥🤥

Canada is already in breach of the post 911 Morth American (US and Canada) Perimeter defense agreement for continental security – truly we will have to occupy them.

We don’t need to worry about the Chinese Communist Party subverting America, our own Politician, Movie Star, and Pro Athlete are doing a very good job of it themselves; throw in a bunch of College Students whose minds have been warped by Socialist Professors and we will be lucky to last until the end of the Biden Socialist Regime ends in 2024. But once again not to worry, you see their brand of Socialism is better than all of the other brands around the world that have failed because they know how to do it right. If we ever needed God’s Blessing on America it is now.

Yes Carol. We are living in the last of the last day’s. Do not let it unravel you. God is still in control. We as Christians need to lift each other up and fight for the souls of the lost. Even Biden and Harris. When Christ comes. He will weed out the evil from the Righteous. God bless and stay safe.

The End Times are real,and it looks as though we are getting closer everyday. The world’s military are building trying to out do other nations. America is definitely not in tune with a mighty military. We don’t have the numbers or those that want to be part of the military. As I see it those that that haven’t accepted Christ yet better wake up. Time is running out.I pray for more to come to Jesus because there is an after life and it is forever but ther is two different places to spend forever.

Just keep this in mind. Every year at the opening of hunting season in the state of Pennsylvania alone there are 1 Million hunters in the woods. With high power rifles. Most of them own multiple guns. And they know how to shoot them. Now muliply that for the country and you have the largest army the world has ever seen. Why do you think that we’ve never been invaded?

D MacKay – China does not have to even fire a shot. They are in the
process of destroying us from within!!! They are succeeding because of
so many FOOLS who are taken in by their propaganda. The fools do not
understand our Constitution!!!

and joe blowhard will be front and center

Biden & Harris aren’t in the WH! Obama is giving orders from California. Don’t believe me? Find O and you’ll find your answers!!!

Roger Buggle – I have played the “Where’s Waldo game” ever since Obama got
Biden elected. WHERE’S OBAMA??? I think he may be in one of the back rooms
in the white house completely running the show (with the help of Susan Rice) You
never see pictures of him now going here and there anymore.

😂😂😂. Too late you communist POS! We had a Great President that fought those Chinese corrupt satanic Nazi democrats and was really hurting them! Your man has stolen the Presidency and is allowing China so do what ever they want just as long as he gets his payoffs!

China succeeded in perverting the US election and have the 1st pro Chi-Com Commander in Chief in the White-house. Admiral Phillip Davidson’s comments sound like a traitors defensive posture “I better say something because they will find out soon enough”. He just informed Congress of China’s “vast disinformation machine” One Million men?… and how the One Million all work to pervert the governmental process of the United States as well as the free world? The Admiral waited until after the 2020 election and now says something? , He was most likely one of China’s useful idiot “slow walker Intel reporters” that held off on the DNI in order to pervert the electoral college vote.
Its Pointless keeping such Admirals in charge. He should be fired
Were this WWII he would not have been allowed to be in command or he would have been shot, either or.

Seems that a whole lot of things are coming out after it is too late to do anything about them — coincidence or intentional — I know what I think.

This is thanks to Biden all his fault.

Pray for righteousness to rule and reign in the United States again. This comes only from the work of the Holy Spirit and God’s rule in the hearts and minds of men. Faith in Christ, repentance from all known sin and victors in life through faith in God. Colossians 2:3 states that “all the treasures of wisdom and knowledge are found in Christ.” Yes, we are all born sinners, but those who place their faith and trust in the finished work of Christ will be saved. Pray for saving faith. It cost God’s Son His own blood to purchase a place in heaven for His saints, A nation will only be looked upon favorably with God’s blessings as people honor His Word, the authority of God’s Word. The grass withers, the flowers fade, but His Word endures forever. God bless.

Personally as a Viet Nam Veteran I think we have become so weak as a nation that we have no chance of competing with China’s Imperialism. 50 years ago we fought a “no win war” trying to stop the spread of communism is Southeast Asia and now we are voting for the Communists. The power of propaganda has destroyed us.Like Khrushchev said in 1960 ” we will destroy you with your grandchildren”. My friend’s children all think that socialism is better than capitalism. I’m glad I have no children.

Don’t tell me Mr. US Admiral, tell that POS that calls himself president. I already know china is a threat, but the “president” is bought and paid for by china, so don’t expect him to do anything except what china tells him to do.

Sadly our military is nothing like it used to be. Does the word woke come to mind?
Yes people our military has greatly faded its horrible.

With the present clandestine people running our country we’re doomed! Totalitarianism has taking control of America and American’s. This has never before happened in my lifetime.

America needs Trump back. He always put America first not last like Biden.

Beijing Joe, Hysterical Kamala, Blank Blinken are pawns that China is using! We need to boycott China, they cannot exist without America. Just because we have morons trying to take down America does not mean they will be successful. We as honest, moral Americans who believe we live in the greatest nation in the world must take a stand ! We will overcome these lying haters!