US Coast Guard Augments US Navy in Pacific, Middle East and Arctic – ‘Freeing Up Shooters’

US Coast Guard Augments US Navy in Pacific, Middle East and Arctic – ‘Freeing Up Shooters’ 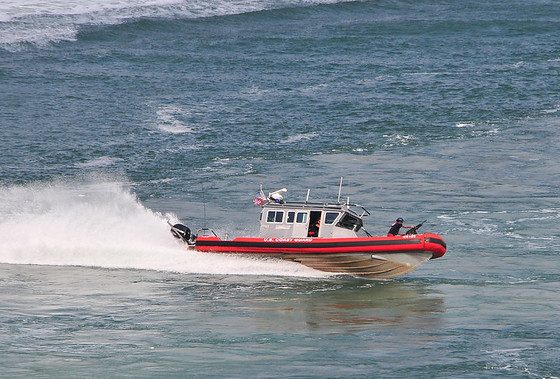 With the U.S. Navy increasingly challenged by dramatically expanding Chinese naval forces, the Pentagon is now counting on the U.S. Coast Guard (USCG) to deploy more ships to the Pacific, Middle East and Arctic regions. This follows a Trump Administration decision I wrote about in late October to base the latest U.S. Coast Guard (USCG) Enhanced Fast Response Cutters in the western Pacific for maritime security missions.

At that time, I noted that the decision demonstrated that the “Trump administration understands that facing Chinese expansionism is about more than preparing for full-scale war…” I added that the “USCG proposal thus ramps up the U.S. ability to deal with these Chinese “below the threshold of war” gray zone tactics with a proportionately “civilian” response.”

Now, the Pentagon seems to be expanding on the concept worldwide. Breaking Defense reports that:

Later this month, the National Security Cutter Hamilton will join two new Fast Response Cutters in the Mediterranean on their way to eventually replace the first of six small patrol boats operating with the 5th Fleet in the Middle East. The ships will first stick around Europe, Coast Guard Commandant Adm. Karl Schultz said today, possibly pushing into the Black Sea to counter the expanding, and often aggressive, Russian presence there.

The Coast Guard is also expected to be deploying more regularly to the Arctic as well, to face both Russian and Chinese naval fleets. Posting Coast Guard attachés at U.S. embassies in critical regions where the USCG will be operating is a key facet of this growing global presence. Breaking Defense notes that:

Later this year, a Coast Guard officer will be assigned to the embassy in Copenhagen to work with Denmark and Norway on issues involving the Arctic, a posting that signals Washington’s increasing interest in operating the High North “as our strategic competitors maneuver for advantage in the region,” Schultz said during his annual State of the Coast Guard address, which preceded his press conference.

The posting comes after the November placement of the first-ever Coast Guard attaché in Australia, who is also working with the governments of New Zealand and Papua New Guinea. In 2022, another Coast Guard attaché will arrive in Singapore for the first time, to help manage growing concerns in the region as the Chinese coast guard and maritime militia become more aggressive over fishing rights and territorial claims.

In the Pacific, the Coast Guard has stationed two fast response cutters in Guam over the last several months as part of the above-noted Trump effort to counter China, with a third scheduled to arrive this summer.

The guard ships are “not ballistic missile shooters,” he said, “but you know not every place that you need a ship needs to have that BMD capability.” What his ships can do is “free up shooters to be the key places they need to be, and we can do sanctions work, we can do[illegal] fisheries, we can do other types of patrols,” like the Taiwan Strait transits guard ships have done in recent years.

These enhanced Coast Guard deployments are all part of the vision laid out in the Tri-Service Maritime Strategy report the Navy, Coast Guard and Marine Corps released in December.

All three of the services are implementing concepts of ‘distributed operations’ that involve widely dispersing ships and ground forces throughout the Western Pacific to dramatically complicate China’s targeting of U.S. assets. ADN

Thanks to all involved with Trump administration for this plan!

yes biden learned that from obama, take credit for what someone else did good and if it fails when they do it, then blame the other guy, WHAT SORRY FAILURE they all are. DEMO-COMMUNIST

many have do this taking credit but it is the American people that believe that bull. Sad huh

I served in the Coast Guard in the late 60’s and until 1971. I served in Viet Nam in 1968, we had 2 missions, number one was aids to navigation and number 2 wa going up rivers to evac Marines and Soldiers when helos couldnt get there. If I am not forsaken the the USCSC Blackhaw got a total of 6 Navy Meritious unit combat awards

That might just put a kink in the Biden family money supply from the CCP. One can only hope it will slow the spread of communism here.

The military are NOT being run by Biden or anyone supposedly in office…President Trump is still in charge because the Act of 1871 was removed, taking America back to a Constitutional Republic, not a corporation run by the cabal. Trump also instituted two EO’s regarding foreign interference, illegal activities, aiding and abetting our enemies and dealing with any and all traitors, and taking away their assets..He also set forth the Insurrection Act to protect our national security from these criminals…Look closely at what is currently occurring. It’s not what it seems. Our military assets took an oath to protect and defend our nation under the Constitution against ALL enemies both foreign and domestic . Those in office and occupying the Swamp, did not under their illicitly run corporation.

I was under the impression that the CG was made operational to defend the homeland thus freeing up the Navy for other places. I do hope that Biden has authorized the CG Commander to change rules of engagement as needed in whatever area they are deployed.

Crap like this is why I refuse to let the military have access to my sons and why I emphatically warn kids NOT to join the military. America needs to mind its own business and stay OUT of other countries affairs. If people in the military WANT to volunteer to put their lives on the line for foreign countries-fine…but do NOT send people who joined the military to PROTECT America to defend other countries. There have been far too many Americans who have died and been maimed-all in vain-for other countries and vile greedy motives behind the interference of these moves.

It is far better to fight a war on another country’s soil than on our own. But I have to agree with part of what you say when the politicians get us involved — tie our hands — limit what the troops can or can’t do — keep their own kids out of it or if it is for greed.

The “Coast” Guard, is supposed to be just that: “OUR” Coast’s Guard! NOT a Naval supplement! Our Navy has fallen behind China’s, who’s ships now out number ours by an alarming margin, thanx to cut backs by BHO’s short sightedness! Now through the rigged elections of 2020, we are saddled with a senile left over of Obama’s regime, who’s goals are, and has always been to “Fundamentally Transform America”, ie, surrender to the CCP! If you believe otherwise, you’re a pathetic blind ignorant gullible fool! Trump wanted to put America’s interests first, that’s why he was not allowed a second term. The “Great Reset” as UN Globalist’s have been conspiring to enact, could not happen with a MAGA President at the helm, so a totally incompetent senile old fool had to be “placed” in the position of US President, to complete their mission, with the guidance of the CCP, which the UN Globalist’s use as guidance for their new “communist” One World Order government. The fools of the West, have surrendered to commumists! Western European civilization “discovered” the world’s civilizations and created interactions and trade worldwide. Europeans created civil societies in many parts of the world, formally inhumane savages and even cannibals! Now we are surrending to what we of European decent have enlightened and bettered the lives of. The Chinese, at one time, were an advanced civilization. Chairman Mao’s murderous regime destroyed the Chinese people’s remarkable traditions and history, and that’s where we, at the hands of traitorous democrats, are headed.

The usurpers will get us into a full blown war soon.

Send in the transgenders and gays first !!!!

yep as soon as the money gets right, and they have there pass back bucks from the military contractors. Then it will be WAR TIME

YES !!! GO COASTIES and GOD BLESS and BE SAFE and KICK some BUTT.

My understanding that though being warned for years the US has done nothing to prepare or prevent an EMP attack from Russia that would completely shutdown all of the US and cause millions to die.. I watched a video how this would happen. The idea has been around for years and is real. It’s hard to imagine but if you could see this video it will scare the H out of anyone. Life will end!

This sounds to me like the Navy’s job not the Coast Guard.

I’m Biden are you my husband are you my wife are you my dog who the hell are you??? I’m writing from the old folks home! Please tell me, am I the president????