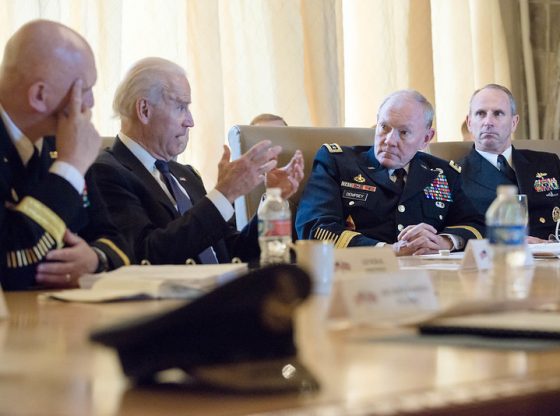 The outrageously politicized onslaught against Tucker by our nation’s military establishment was severe and personally directed against the Fox News pundit.

Many are asking if these senior Pentagon and service leaders would have fired these unprecedented public salvos against an American opinion journalist without direction from the White House, or without at least tacit promise of ‘air cover,’ from Team Biden. Many of their numerous attacks were described and quoted in my prior piece.

One of the worst offenders, not included, was sadly my own service, the U.S. Marine Corps.

“What it looks like in today’s armed forces @TuckerCarlson,” the Marine group tweeted along with a picture of a female Marine carrying another Marine. “Get right before you get left, boomer,” the account mocked.

This bizarre and unethical response from the II MEF Information Group, along with the politicized and unprofessional responses from other senior military brass, was widely condemned as conduct unbecoming for American service members. Worse still it is unacceptable from a professional military force in a democracy under strict civilian control.

The Blaze highlighted several angry responses to II MEF’s broadsides against Tucker, primarily from GOP leaders, Marines, and other veterans:

Republican Senator Ted Cruz of Texas immediately reacted, calling out President Joe Biden, and other senior Pentagon leaders, and demanding a meeting with the Commandant of the Marine Corps, David H. Berger, via the Secretary of Defense, Lloyd Austin, over these highly inappropriate political statements.

Cruz tweeted his concerns about how Team Biden appear to be weaponizing his military leaders in a partisan political war against any opposition, including TV opinion journalists:

Under Biden, the military is launching political attacks to intimidate Tucker Carlson & other civilians who criticize their policy decisions. Officials in uniform are being used for the campaign. I’ve demanded a meeting with the Commandant of the USMC to put a stop to it.

Under Biden, the military is launching political attacks to intimidate Tucker Carlson & other civilians who criticize their policy decisions.

Officials in uniform are being used for the campaign.

I’ve demanded a meeting with the Commandant of the USMC to put a stop to it. pic.twitter.com/Ihl8xRJr0S

In his attached letter, Cruz noted that no matter one’s views on identity politics or Tucker’s specific comments, the military should never be involving itself in political controversy or appearing to take a side. Both Cruz and I are also deeply troubled that some active military members were suggesting that Americans couldn’t criticize the military unless they had served.

This spectacle risks politicizing the military after several centuries of efforts to keep military officials out of domestic affairs, undermining civil-military relations by having the military take a side in a contentious cultural dispute, and the perception that military leaders are happily weaponizing the institution against political critics of the sitting administration. This kind of behavior, while perhaps typical in a military controlled Third World country, is completely unacceptable in the United States of America.

Whether President Biden, or his minions, directed the Pentagon brass to launch these outrageous attacks, or he simply created the climate where they felt they could, he needs to call off his Pentagon attack dogs. This is not what America’s military should not be doing to fellow Americans.

TIME TO DITCH BIDEN AND HARRIS!

They are not woke but they are broke as in Brains broke .

The military are becoming a bunch of pussies! And the generals are the leaders of this bullshit! Letting pregnant woman’s do the fighting! Just ask Biden!!! Vietnam veteran from 1968- 1970. BTW, no females were in my platoon!

Obama got rid of most of the good generals, admirals and other top brass.

This started with carter. One of the reasons I left the Army when he was sworn in as I saw it coming.

The Biden administration is the disaster we all knew it would be. Biden has intentionally defied the oath he took to honor and defend our constitution and country.

Biden should be impeached for violation of oath of office and for un American activity comprising the safety and security of the nation.

The Biden administration is the disaster we all knew it would be. Biden has intentionally defied the oath he took to honor and defend our constitution and country.

Biden is prompting the evisceration and emasculation of the military. Why would he squelch these mouthpieces?

I’m Biden are you my husband are you my wife are you my dog who the hell are you??? I’m writing from the old folks home! Please tell me, am I the president????

The military top Brass are too political now and a bunch ad ass kissers.

When I served in the US ARMY Special Forces Super Soldier Training Program, a top secret intertwining of Special Forces and the CIA to create Super Human Soldiers we knew there was such a thing as a Democrat Party but we widely ignored anything they had to say mainly because the Democrat party was nothing but liars and always have been! The absolute retardation of the very weak military of today is absolutely astounding, the military of the Desert Storm Era when I served would be telling biden you want the gays and transgenders in the military we’ll make you a deal we will allow them to train but their Barracks will be inside of your home!!!!!

the Sargent’s should replace them

There were 2 men caught in a gay sex act while I served in the military they were marched to the rifle range q course and cut in half with a .50 Calibre Machine Gun! Staff Sergeant Palmer pulled the trigger!

This event happened in September of 1991, Fort Leonard Wood MO 65473! The leader of the US ARMY Special Forces Super Soldier Training Program was General Mccolaczek!

Queen Elizabeth has had a very long REIGN over Great Britain. Biden needs to REIN in his woke-out-of-control-pentagon…

Biden couldn’t reign in anyone , he doesn’t even know what’s going on and if he did at one time he’s forgotten.

Son of a WWII paratrooper. Father of an “Iraqi Freedom” paratrooper (a female, who HAS been pregnant) and a Vietnam Vet myself. Since I worked closely with, among others, Marine Corps LRRP’s (now “Marcons”) and hauled ’em around during my time with the Amphib Navy (and having undergone their training, as all regular Navy Officers were then obliged to do), perhaps I can speak on these matters without offending our Marine sergeant/PIO (or, I suppose, I could just give Tucker Carlson my “proxy”, which, btw, I offered him). Perhaps I will start by reminding him that it was the “Boomer” generation which won the Cold War, as it was also the one which created the Information/Technology economy which sustains the USA. We overcame multiple “energy crises” and turned the nation into the world’s greatest producer and one of its larger exporters of energy, less than 20 years after the Saudis were able to hold us hostage. One wonders what the “Baby Bust” and “Millennial” generation has achieved… Not much that I can discern, save to put into jeopardy all that the Greatest Generation and the Boomers created, a result they obtained without, seemingly, having acquired either grace, discretion, or manners. All I know is that this presumptuous PIO, had he spoken so in my day, would have been brought on charges for “conduct unbecoming”.

Reagan won the cold war and he was not from the Boomer generation. They benefited from him being president. If a Boomer had been president what is going on now would have happened then on steroids.

Biden watched “McHale’s Navy” a lot in his childhood.

When should we expect the creation of a “GRU” and political officers in every unit?

Not at all a surprise. With the National Guard guarding Nancy from being arrested, and apparently permanent barricades up around the people’s house in Washington, it is obvious that the Biden team (I don’t think he has the marbles left to lead it) is following Hitler/Marx playbooks. We can lament all we want, but obviously, everybody is too afraid to buck the system, so we in the “flyover country” had better be able to take our country and our liberty back at some point.

KEEP THE COMMIES AWAY FROM THE ARMY. THIRD PARTY COMING. 3-2=1
SPIRIT OF AMERICA PARTY BOOK.

The military are becoming a bunch of pussies! And the generals are the leaders of this bullshit! Letting pregnant woman’s do the fighting! Just ask Biden!!! Vietnam veteran from 1968- 1970. BTW, no females were in my platoon!!

Shame that Carlson is being put done by some of the most trusted men and women in the proudest people we have here in the US. God bless you all and please keep me safe, my children, grandchildren, and grandchildren. Houray