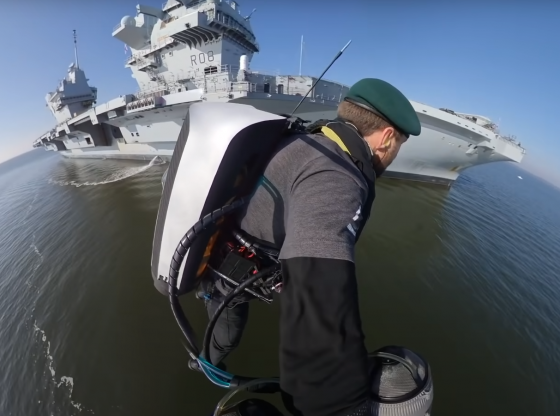 These jet suits, explains PM, will allow troops to “zip across the battlefield to fight in cities, rescue downed pilots, or enter or exit the battlefield.”

The Royal Marines’ jetpacks, which cost $440,000 each, use micro gas turbines for lift and are initially intended as a way to quickly board ships at sea. As seen in this amazing video.

DARPA’s request may go in a much different direction, perhaps funding a stealthier, quieter system powered by small, lightweight batteries.

The DARPA solicitation states that:

To get there, DARPA will pay up to $1.5 million in development costs to whomever presents the best ideas for a powered flight system capable of quickly moving a single person.

Kyle Mikozami explains what this translates to in real terms for the individual soldier, sailor, airman or Marine:

Whatever it is, DARPA wants the personal air mobility system to fit in one bag or box and be ready to go after just 10 minutes of assembly. The system should be capable of low- to medium-altitude flight and have a range of 5 kilometers (3.1 miles).

Ultimately, these flying suits could be used by specialized military units for combat search and rescue, Maritime interdiction, and special operations forces (infiltration/exfiltration), as well as “augmented urban combat.” Ironman may be closer than we think.

From what I see they make a guy a terrific, defenseless target in military application..

Kinda looks like fun! I bet it’s cold out there though.

Duck Dogers in the 25 Century

Revival of the ancient sport of javelin catching?
The auto aiming and tracking feature of modern sniper scopes raises serious questions someone forgot to take into consideration.

Cannot understand what is keeping that green beret on his head…plus, there’s no evidence of wind plastering the beret on his head. I wonder if this is some kind of white screen trick photography.

The enemy can use either a trap or skeet range as practice for shooting down these manned targets.

I suggest DARPA contract with UK to have our cameras on their suits, to study how the men are using their skills and equipment in various attack modes. This might gain US valuable info at lower cost than DARPA doing their own research. The info gained might allow/cause DARPA to engineer the US suits to be better suited to our troops and needs.

Are they going to make a maternity version?