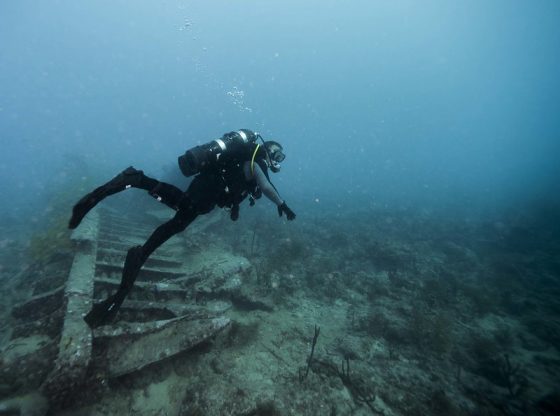 With the Pentagon’s increased focus on near-peer conventional conflict and heightened Russian, Chinese and other threats facing the U.S. in the Arctic domain, U.S. Navy divers prepare to take the fight to the frigid waters of the North Pole. And that fight would be a very different one to what most are used to.

These Navy divers conduct a variety of missions for the fleet, from salvage and recovery to ship and submarine repairs, as well as “saturation diving,” which can involve “working and living at extreme depths for days or weeks at a time,” according to the sea service.

The water in Minnesota was between 36 and 38 degrees during last month’s training. This freezing cold environment, notes NT, is “a world away from the bathtub-temperature waters of Virginia and Florida where much of the unit’s dive training takes place.”

Diving beneath 18 inches of ice presents its own hazards and challenges: “Divers usually have direct access to the surface,” Chief Warrant Officer 2 Joshua Slack told NT. “Knowing we’ll be diving under the thickness of ice, we try to prepare them mentally for the rigors.”

…diving under ice is extremely dark, so during the training, divers are aided by patches of ice above them that have been cleared of snow to allow sunlight in and assist with orientation, Master Chief Jason Mette said.

In case of an underwater problem, divers are instructed to stick a screw into the ice above and standby while rescue divers deploy lines and do 360-degree sweeps in the murky depths, Slack said.

NT added that while diving in such an environment can be daunting, Mette s emphasizes the same principles as any other dive scenario: “I like to stress to the guys three things: trust topside personnel; trust in your dive buddies, and trust in your equipment.”

Ouch! That would not be for me.

If Trump were in office instead of this dementia crazed criminal Biden the navy would not have to be putting their lives in danger. Trump had the country running on a smooth running track. We didn’t have all the problems with millions of illegals coming into our once great country and we the tax payers are expected to take care of them. But because of the democrats and their hate of a man who did what no democrat had the brains to get done. Because of that hate Biden overturned everything good Trump did and sold us out to china to pay off the 40 million dollars he owes them. It took Biden 50 years to get his new toys to play with by stealing the election and that is being proven every day by voter recounts. How long will it take to get rid of these democrats who are out to destroy America. Now we have to also deal with the Rino republicans who don’t have the balls to stand up and fight back. No pelosi has probably paid them to side with the enemy. Pelosi is one sick hateful , heartless demon, who needs to go live with the devil. So sorry navy that you are being put through this. I have a grandson in the navy My prays are with you all. GOD BLESS PLEASE STAY SAFE.

My son has a life-long friend who is a Navy diver. We pray he stays safe.

we need to pray for these brave divers

Soros has so many governors, da’s, s..o.s.’s, ag’s, that is how so many of the lawsuits were not considered.

Our enemies know this administration is weak and will not stand up to them in any meaningful way. Trump was strong and he was respected. Our enemies knew he would do whatever it took to protect us. Weakness brings war, strength brings peace.

YOU ARE BETTER THAN THIS

TRUMP Would Have Insisted On A DEBATE With PUTIN. He never ran from a confrontation or a fight in his entire life. BIDEN is a disgrace. Anyone who VOTED for BIDEN REGRETS IT NOW.! I Strongly Suggest Praying. VOTING REPUBLICAN. And RUNNING FOR POLITICAL OFFICE YOURSELF. Only If “YOU” Are A GOD LOVING CONSERVATIVE! … You Already Got My VOTE! … No Experience is necessary (AOC was a bartender?) The PAY and BENEFITS are AMAZING….psst Many times when I have VOTED. I noticed Political Positions where only “ONE” Person was running? I WANT THAT JOB! … Call your Republican Campaign in your area and ask if anything is coming up for grabs. … THEN GO GRAB IT!