INTELLIGENCE – Iran Plans to Attack Vital US Base in Washington DC, and Kill a Top US General

Home /Intelligence, Iran Threat/INTELLIGENCE – Iran Plans to Attack Vital US Base in Washington DC, and Kill a Top US General

INTELLIGENCE – Iran Plans to Attack Vital US Base in Washington DC, and Kill a Top US General

According to communications intelligence (COMINT) intercepts by the National Security Agency (NSA), Iranian terror leaders have discussed plans to attack Fort McNair, a critical Army post in the U.S. capital, and kill the Army’s vice chief of staff, who lives there.

Ft. MacNair, located on the water near the bustling, newly developed Waterfront District of DC, is home to the Joint Force Headquarters-National Capital Region and the U.S. Army Military District of Washington. Its motto is “Guardian of the Nation’s Capital.”

The Army post, one of the oldest in the country, also houses the Vice chief of staff, General Joseph M. Martin Martin’s official residence. It is also home to the National War College, where senior military officers hoping for admiral or general study national security strategy.

…Iran’s Revolutionary Guard discussed mounting “USS Cole-style attacks” against the Army post, referring to the October 2000 suicide attack in which a small boat pulled up alongside the Navy destroyer in the Yemeni port of Aden and exploded, killing 17 sailors.

The intelligence also revealed threats to kill Gen. Joseph M. Martin and plans to infiltrate and surveil the installation, according to the officials, who were not authorized to publicly discuss national security matters and spoke on condition of anonymity.

The intercepted COMINT chatter was reportedly among members of the elite paramilitary Quds Force of Iran’s Revolutionary Guard Corps (IRGC) and focused on potential military options to avenge the targeted U.S. killing of the former Quds Force leader, Qassem Soleimani, in Baghdad in January 2020.

According to AP, the two U.S. intelligence officials “said Tehran’s military commanders are unsatisfied with their counter-attacks so far, specifically the results of the ballistic missile attack on Ain al-Asad airbase in Iraq in the days after Soleimani’s killing.”

These new threats from Iran have increased tension with DC officials and residents as the Pentagon seeks to expand its security perimeter around the base. In January Major General Omar Jones, commander of the Military District of Washington, cited “credible and specific” threats against military leaders who live on the Army post.

City officials remain unconvinced and continue to push back the Pentagon security plans.

No response or comment yet from the White House or Pentagon.

The Biden administration has failed to retaliate decisively against Iran for several rocket attacks by Iranian-backed militias in Iraq, including one attack on the U.S. embassy in Baghdad.

As I noted earlier, the only response by Team Biden so far has been a pinprick airstrike against a militant road stop in Syria, which is only fueling more Iranian-backed attacks in Iraq, and likely encouraging these plans for even greater strikes against the United States.

Was this intelligence report by the same intelligence organization that investigated russia’s involvement in the election biden and the democrats stole using our elite fbi lead by james comey and robert mueller.

“operations” with an “s”

The United States knows where Farsi Island is located and what’s on it.

Biden-Harris administration will rush to Biden’s basement and stay there until it’s over. We have the weakest pair of ninnies ever in the White House. Trump wouldn’t let Iran talk so big.

The B-H Administration is only good at attacking the USA.

With the southern border wide open,I would not be surprized that Iran has terrorist headed for targets all over America – – Bimbo biden is a fool !

So hold these democratic communist politicians accountable all of them starting at biden down,

Who will hold them accountable? Turtle Mitch or Lizzi Chaney?

Time to show Iran who is in charge. Biden has walnuts for balls. Where is Trump when we need him?

We allowed these criminals to steal the presidential election we all knew that it was fixed instead of demanding these democratic arrest we just let it go we keep this up and there will never be an Free America again all this spying on Americans cameras everywhere listening on on phones, and their trucks riding around listening to you in your own homes all because of 911 it has to be stopped all these agencies closed they are all corrupt bought by the highest bidder

more like a couple of green peas or a pair of peppercorns…. T deficiency….in the extreme

81 million morons voted him out

Sadly, the Biddyboy Administration doesn’t scare any of our enemies in the Middle East. And Biden is the biggest Cluck 🐔Cluck when it comes to fighting and preserving our Freedoms!

Unfortunately, tensions are only going to get worse until Biden is removed from office and replaced with a President that has some brass clangors. All Biden has are jingle bells!

What’s with the D.C. authorities pushing back against more protection for that General and the School that is there? If the “intel” is reliable, protecting the General should be a priority. But if the D.C. authorities are Democrats, unless the threat involves them directly, they won’t lift a finger to help protect the General or the school. That’s just how the dems roll…

As serious as this is, Micala, I have to admit I got a big chuckle from Biden’s “jingle bells!!!” Thanks for the smile today! 🙂

Wait a minute, isn’t the wannabe president the guy who told us all about him singlehandedly standing up to a vicious Delaware gang member called “corn pop “, when president Bidet was a pool lifeguard? Was corn pop a member of the vicious 3rd street Breakfast gang? Makes me feel REAL confident.

Thanks for the laugh during these most frightening times!!

We have a great defense. Our VP will sleep with Iran’s leaders and the deals will be cut.

How about we give them a map to the white house??

James B Jacobs
Reply to  FedUp

All the killer has to do is walk across the border and tell the Border Patrol he wold like to be sent to Washington D.C. and they would probably give him a plane ticket, compliments of the American taxpayer.

This country will rue the day they allowed these demwits to take charge.

Only a bunch of odiots would brag about their plan of attack ! No one said that Muslims were smart !

But then, look who they’re playing to, Thomas — demented Joe and his joke of a sidekick, Harris. To whom everything anybody says seems to be something to laugh and cackle about!!! Doesn’t take much “smart” to deal with them! 🙁

We will be safe Kamala will charm them to death.

We don’t have any good generals all there are is democratic communist party good old boys oops he shes not worth the trouble,

It is clear! Our country is in danger because like a pack of wild dogs these leaders of communist rabid places smell weakness in the idiot who ,in name only, is at the head of our country.
How can we save our ship? SOS. Time for the people of our country begin tomSCREAM. NOTB N MY COUNTRY. JOE MUST GO. And take the hoe and the leaders of this sham government with him.

Sounds like time to send Iran a “message “ although I doubt that Beijing Briben would do much more than send pallets of cash like his boss Odumbo!

No worry! None of the D.C. politicians will ever be hurt. The bureaucrats in D.C. will just move into the elevators and take them down to their under ground rail roads to move them to safe living quarters far away from D.C. Too bad that the average American doesn’t have the same chance of survival. Read “Under Water and Under Ground Bases” by Richard Sauder”, Ph.D.

Oh I’m not worried for them at all.

Enjoy life as we know it,..It’s the only one you have and be ready for the after life…..

Any chance the fence will be damaged?

The left, when it is not arguing for no response at all to attacks, always argues for “proportionate responses.” But proportionate responses don’t discourage further attacks, because the terrorists are quite willing to have their people killed, as martyrs to the cause (in fact, they WANT their civilians, or arguably civilians, killed, so they can use the “civilian” deaths for propaganda against the US). The appropriate response is an overwhelming response on military or political targets, making it clear that the act of terror against the US is way too costly to repeat. In this case, the rather easy task of wiping out the Iranian navy would be a clear signal that attacking the US does not pay.

GO AHEAD,..MAKE MY DAY..DO YOU FEEL LUCKY?..A CONTINENTAL BALLISTIC MISSILE TO TAKE OUT YOUR WHOLE NUCLEAR ARSENAL AND EVERYTHING AROUND IT FOR MILES !! REMEMBER 911 WE HAVEN’T.

Go ahead, the place needs remodeling anyway.
Hey Qud dudes, while you’re rooting around DC, swing by the white house; it needs redecorating too.
Good luck, certainly the intelligence community is giving us the straight poop. 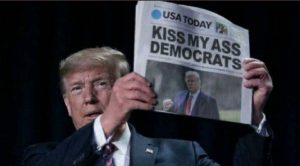 If they’re openly threatening us, that’s all it is, is more of their empty threats. They’ve been doing this since the ’70’s and have gotten so good at it they’ve managed to hold everyone at bay. I would have called their bluff a long time ago, and smacked them instead of Iraq. They’ve been pulling our strings long enough and now they have Russia and China’s blessing, so they feel safe.