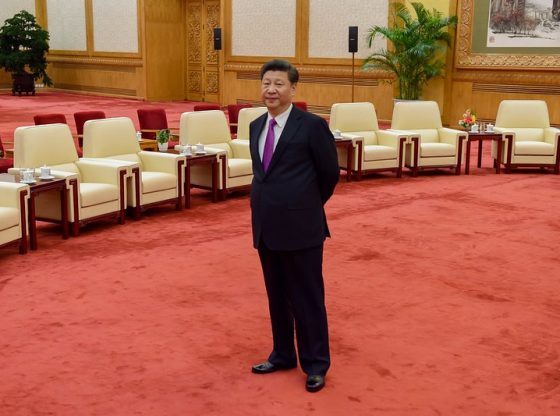 In a harsh bid to limit outsiders’ views of Chinese military developments, the Chinese Communist Party (CCP) is cracking down on unofficial, previously open-source military information on the web. Numerous websites and forums have been shut down, and warnings issued to amateur Chinese military commentators that even unwitting revelations of military secrets by patriotic defense enthusiasts could lead to jail time.

In addition, notes DN, “forums on the Chinese website cjdby.net that discussed developments in the People’s Liberation Army (PLA) were also closed by the site’s administrators.”

Analysts suspect that the crackdown was provoked by recent incidents where photos were published on social media of different Chinese weapons systems still in development.

The Weibo account, Jun Zhengping Studio, which roughly translates to “Military Discussion Studio,” cited a recent incident where a photo published on social media showed “a weapon that has yet to enter service,” which became “key intelligence” for foreign agencies seeking information on China’s defense and military developments.

It’s unclear what recent revelation the commentary was referring to; although in recent months, video of a Xi’an H-6N bomber carrying what is believed to be an air-launched hypersonic glide vehicle as well as photos taken discreetly from a distance showing elements of the internal layout of China’s third aircraft carrier currently undergoing construction at a shipyard near Shanghai first appeared on China’s social media.

The crackdown is potentially detrimental to those who use open-source material to analyze China’s military developments. Other examples of such sources include a regular stream of photos showing the progress of the aforementioned aircraft carrier undergoing construction at Changxing island near Shanghai, sometimes taken by passengers on commercial airliners taking off from or landing at the city’s Pudong airport.

I’ve had enough of them taking our jobs away. You can see this is a distraction, can’t you? While we’re watching Rome Burn, they’re (Liberals) fiddling with these foreign potentates. Liberals need a boogeyman to deflect our attention away from their shenanigans.

They are planning to attack. What better time then now?

Scroll down below these comments and you will see the yachts of the rich and famous. The headline is Bill Gates’ new yacht is bigger than a battleship. Oprah’s is said to be bigger than the Titanic. These are the people who tell us WE have to change OUR ways to save the environment? These people also own their own private jets – helicopters capable of landing on their yachts – and how many limousines to get them from place to place on land? Not too mention all of their exotic cars and 20,000 sq ft mansions. Their hypocrisy knows no bounds.

China will use and claim to support our hate America leftest democrats Globalist ideology to destroy us, the Chinese know the division forced upon the people by the believed rigged election, they helped by printing bogus mail in ballots, and our administration and Senate majority works to their advantage. The total destruction of our military is in the eyes of the democrats showing their ignorance.Taiwan is a Pearl in Asia, wealthy, beautiful, ultra modern democracy, this Pearl the CCP wants, but Trump stood in the way. Now their employee Biden is in power little fear of him exists, they bought him. Biden is a puppet of the Democratic Party hiding behind the curtains, even if the folks who rigged the election go to phase two of their coup, and appoint president Harris, China is the real winner. Taiwan is in deep shit, the democrats need an army to protect their dictatorship as they pass self destructive unconstitutional laws and Joe signs endless executive orders. Wait, by any means possible, all fair and legal elections will end and be replaced illegally by one party rigged elections. When HR1 passes, we are legally no longer a free people. We must be given the right to a fair federal investigation as begged, and have election fairness legislation, instead of HR1 which guarantees more believed fixed elections..

Of course they are

China has joe biden bought and paid for,through thier deals with hunter biden – – – – The Biden Crime Family,is thier ace in the hole !

No military should allow information to be aired on the internet about their military hardware. That is just insane. If the USA is allowing information about weapon systems it has then we have the dumbest military leaders and politicians in the world or the biggest traitors the world has ever seen.

That guy’s getting plump. ‘Must be all that American food he’s been eating.

WHEN YOU SEE a fat chinese, he is a corrupt politician and a political-bureau boss, the fatter he is ,the higher he is in rank.

I’m very surprised that communist china even “allows” its proletariat to have a computer let alone go on the internet at all.

They are seriously committed to a massive military buildup, and that is all we really need to know in order to prepare for it. The safest way for communist China to “defeat” the US military is to patiently destroy the wealth that makes our military possible, so everything they do is oriented towards that long term divide / weaken / impoverish America goal. They openly brag of how they will defeat us without firing a shot. and this is fairly common knowledge.

Just as a side note: Russia and America have one thing in common: Neither wants to see iron fisted militant communist China rising to become the world’s foremost power. Very briefly, the ChiComs are painfully aware of how difficult it would be for them to impose their will upon even a loosely organized Russian / western nations alliance against them. So of course they seek to be very friendly and appear to ally with Russia as much as possible, wisely preferring to patiently deal with them later after the western nations have fallen, and this is most important for the moment, to do everything in their power to create American hostility towards the Russians, in order to prevent our nations from ever being able to stand together against them.

Thus, when you look at anti-American leftists throughout our government and media, specifically those whom you would most suspect being heavily influenced by communist China, you’ll also find a remarkably fierce hatred for all things Russian. Every time the public conversation turns towards what communist China is actively doing against us, the socialist democrats start endlessly scheming and screaming about “Russia! Russia! Russia!”, in order to change the subject away from the most powerful potential enemy we face! I am not defending Russia in the slightest here either, but an adversary of the enemy who is trying to destroy my country might be something we could work with, so to speak. We already know we can at least establish a “Mutually Assured Destruction” balance with them as we did during the Cold War, whereas communist China fully means to rule the entire planet, to include owning our nation. They believe this to be their destiny.

Just food for thought. No News At 11.

As Nakita Kruschev said all the way back when JFK was president
“America will be destroyed from within.” They have been patient plotting this for decades. Also if you have not heard of a little cult called SUBUD check it out while you still can. BHO is a product of SUBUD in fact the founder and leader of this cult – Muhammed Sabuh may well be Barry’s biological father. There are comparison photos of the 2 available on line – again for now anyway. Records are being sealed and the internet “sanitized”.