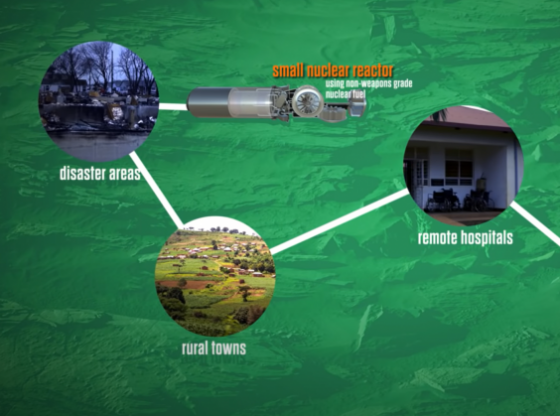 The U.S. Defense Department (DoD) is going green, or ‘glowing green,’ as the Pentagon has just selected two companies to develop compact, portable nuclear reactors for field use by the military. Using compact nuclear reactors will not only reduce the Pentagon’s massive carbon footprint but significantly reduce its energy costs and its dependence on local energy grids.

The portable nuuclear reactors, which could be truck, rail, or air-transportable, would be for deployment overseas, while another type of compact reactor being developed would be for domestic use by the military inside the United States.

The Air Force and the Marine Corps, noted The Drive, could especially benefit from these compact, deployable nuclear reactors for their new expeditionary basing concepts. Meanwhile, even though the Pentagon order demands a design that is incapable of melting down, does not require constant monitoring for otherwise safe operation, and doesn’t present an immediate health hazard, there are myriad safety and security issues to resolve or mitigate for deployable reactors in conflict zones.

Still, according to Defense News (DN), the two companies, BWXT Advanced Technologies, and X-energy, along with Westinghouse Government Services, were each given preliminary contracts of less than $15 million last March to begin design work on the portable reactors.

These entities were chosen by the Pentagon’s Strategic Capabilities Office, notes DN, to:

continue on with Project Pele, which seeks to develop a reactor of 1- to 5-megawatt output that can last at least three years at full power. In addition, the reactors must be designed to operate within three days of delivery and be safely removed in as few as seven days if needed.

…The final design is due to the Strategic Capabilities Office in 2022, at which point the Defense Department will make a decision on whether to move forward with testing the systems.

According to a Defense Department press release, DoD reportedly uses “approximately 30 Terawatt-hours of electricity per year and more than 10 million gallons of fuel per day.”

A 2018 technical report by the Nuclear Energy Institute concluded that 90 percent of military installations have “an average annual energy use that can be met by an installed capacity of nuclear power” of 40 MWe (megawatt electrical) or less.

While Project Pele is designed to produce deployable portable nuclear reactors, another effort, reports DN, managed through the Office of the Under Secretary of Defense for Acquisition and Sustainment, is focused on a pilot program to develop a small nuclear reactor in the 2- to 10-MWe range geared toward use on military installations on U.S. soil.

This latter effort has a goal of being operational by 2027. As both these efforts progress, expect much more news and discussion on this important security and energy topic.

Russian Tanks Near Ukraine Have…