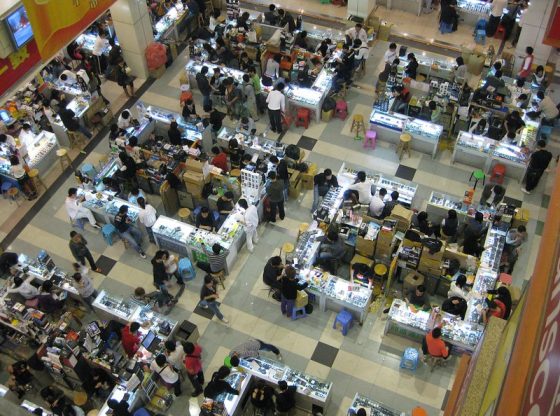 Beyond the numerous other statements of intent, strategic plans that have been revealed, the massive military buildup and bellicose actions by China, now add a candid admission by a top Chinese political advisor, to list of proof showing China’s clear goal of world domination. In order to achieve that audacious objective by their intended date of 2049 – the 100th anniversary of the founding of the people’s Republic of China (PRC) – first the Chinese Communist Party (CCP) must ruin the United States.

And if it wasn’t already clear enough, notes The Epoch Times (TET), Chinese officials have a very specific plan – a Grand Strategy – to do so. In newly revealed information the paper notes:

A leading Chinese professor [Jin Canrong, a professor and associate dean of the School of International Studies at Beijing’s Renmin University of China] – who is also an adviser to the Chinese Communist Party (CCP) – laid out a comprehensive plan for the communist regime to overthrow the United States as the world’s superpower.

Jin Canrong, dubbed “teacher of the state” by the Chinese, is a prominent anti-U.S. scholar and an advisor to two powerful bodies of the CCP, the Organization Department, and the United Front Work Department. He detailed this Chinese grand strategy in a July 2016 speech on “Sino-U.S. Strategic Philosophy” given during the course of two full days at Southern Club Hotel Business Class in south China’s Guangzhou City. The Chinese language document is linked above.

The Epoch Times reports that Jin Canrong stated unequivocally – “We want to be the world leader,” explaining Chinese Leader Xi Jinping’s desire for a “national rejuvenation” of the country.  And to get there, America must be defeated and neutralized as a world power. TET continues:

The strategy to topple the United States was composed of two broad components: weakening America through both internal and foreign sources; and strengthening the Chinese regime’s economic, military, and diplomatic power.

Using a metaphor of a company to illustrate the U.S.-China dynamic, Jin likened the United States to a company president, and China to a vice president who wants the top job.

“The United States is a middle-aged man, who is good looking, has strong capabilities, and support from most employees,” Jin said.

“[To replace it], we first need to create the conditions to make it easier for the United States to make mistakes. Second, we should make it as busy as possible [dealing with problems], to the extent that it will feel depressed and want to give up. Third, we should become intertwined with the United States, so that it can’t attack us.”

I would be happier with this story if your two advertisements weren’t for technology made in China. She need to find you more American sponsors.

And auto-correct turned We into She. Looks like a foreigner wrote it.

They really don’t need to do that. Being a super power is very expensive. It also comes with a lot of problems they don’t need. Something happens – What’s China going to do about it? Send in a bunch of young men and kill a bunch of people? They could avoid that whole expensive mess.

It looks like a large part of their strategy involves buying American politicians. They seem to own the White House and most of the Congress.

Confucian wisdom says….. If Xi goes to bed with an itchy bum, Joe Biden wakes up with a stinky finger.

We could see all the way back to the great O it was as if we were taken over. I felt like an abused child. That feeling has returned. Many that were in congress then are still in office. The ones who did nothing. Each time they take a destructive action on this country, it is like a punch to a fighter in the ring. Closer to the KO. Ask why we keep passing CR’s instead of balancing the budget, invasion of the Southern borders, importing Ebola. Its pretty obvious folks they don’t like this country or its people. You can tell they are Hell bent on the agenda. When are the people done playing patty cake?

Communist China must be stopped. We’ve had threats in the past and confronted them. Whatever it takes! However, the greed and corruption of Government and DOJ have been compromised just like the Biden Crime Family!. The present administration must be removed and all traitors locked up in Gitmo. The military must conduct the prosecutions for all traitors. US Marshalls must intervene with the military make the arrests.

Just look,,, Todays headline reads that HRC is once again above the law. America has to start depleting and flushing garbage politicians by the droves if she is to survive.

The Aquiles Talom of Chinese, although they Are Smart, they Have “ Slave Mind”, so this is their Vulnerable point As A Human being.

They always looking for A Leader, if Not get One they Are Vulnerable

With Biden at the helm the last thing we have to worry about is China.

Why do you say that?

Ah hell you know, Biden is their chief go getter, he loves the CCP cause they give him money.

LISTEN UP…IWas a PRESIDENTIAL ADVISOR to PREZ TRUMP…the LAST 2YRS of HIS TERM. I ADVISED HIM Against the CHINESE GOVT…IRAN..N. KOREA…RUSSIA..TERRORISTS…the WHO…PLANNED Parenthood..Gave HIM POINTERS on HIS Last STATE of the UNION Address. GOD Appointed ME t o HELP PREZ TRUMP. I Will Continue to HELP HIM…the UNITED STATES…ISRAEL..CHRISTIANS…TRUMP SUPPORTERS…CHRISTIANS to BE.MY SPIRIT and MY SWORD is UNDER CONTRACT to GOD Sealed in MY BLOOD. I have Been WORKING Parttime for GOD since the YR 1990. GOD is NOT Thru with TRUMP Yet. TRUMP Shall SURELY Become a TRUMPET. GOD’S TRUMPET. From SamuraiQueen…GOD’S ADOPTED DAUGHTER…Forever. 😄😄😄

The military should step in and take the idiots running America down going all the way back to Barrack Hussein Obama. He is a joke and needs to be taken down because of his hate for America. I know the FBI and the CIA are in on it. Think about all the proof that showed up in the Russiagate investigation. So much treason and no convictions. Obama should be given the death penalty for treason

Biden is quickly ruining America and helping the CCP reach their goal!
If he continues as is America will be handed to the CCP in record time.
My heart cries each day biden/harris are in office.

I feel the South China Sea has a big part in China’s move for World Dominance. I also think they may be behind the recent Canal Blockage. Just to test response times? Plus, testing the Sea Water ways on Every Continent. Not to mention the Pandemic? That Highlighted America’s Many Weaknesses. Thank God we had a President who found a way to over come ALL of those weaknesses. Who built up our Military. Did Anyone Notice that NO MONEY is ear marked for the Military? Not One Dime has Biden set aside for the Military in ALL HIS EXTRAVAGANT SPENDING SPREES? … If you thin for one minute this INFRASTRUCTURE BILL is a shovel Ready Bill? Hahahahha … Not A Chance Folk’s! I Say: NO MORE MONEY under BIDEN’S REIN. … He’s at his LIMIT. NO MORE NEW SPENDING SPREES.

Robo
Reply to  NO MORE

Yep we have given twice before for the infrastructure and so far none of it has been done.The money always goes to the most urgent need, like DNC RNC coffers, cogressional raises, corp bailouts, to Iran, to all pork bills, Veit nam, some BS presidents library, family planning, supporting some abroad country that kills and maims and are socio-commie, Some other emerg., never the border, stimulus that’s not stimulus (which was already our money, stolen and returned less than 1/3 of it) it goes on for the 3rd time now and we will not get the infrastructure even then. Watch for more ripoffs, our country’s govt can not sustain itself on our taxes alone, must steal. Their work is impotant, must make laws after laws, impeach everyone in sight, play the citizens for the fools they are.

Robo
Reply to  NO MORE

It is a bill to keep america running, by financing a drunken congress, a destruction of american small businesses, resulting in millions of lost jobs, no one left to tax, and i want to meet this superman taxpayer in the next generation who will pay for this reset, rebuild, this bailout of some very large states, the masses of illegal immigrants, with no energy, warmth or transportation, no job, and supporting china and iran or anyone with a commie leaning, If we want to survive we have to rebuild america, rebuild on the existing constitution, stay in budget, stop the illegal immigration, and replace all these non brainiacs in the gov’t now, need to find most of them a job in the private sector, quit associating with commies, and warlords, keep our military strong.

The CCP will work on the Gain of Function of the corona virus so that the next virus they send to the USA will be a real Killer. The CCP wants no destruction of the USA because they want the USA for themselves intact. except the American population.. This is all part of their 1000 year plan to own the entire world. Other dictators in History have had these same ambitions. Thank you Dr Fauci as he went to Wuhan and worked with the researchers at the Weapons Virology Labs. on GAIN OF FUNCTION When Fauci left China to return to the USA, he made the Chinese Researchers promise to do no more experimentation on GAIN OF FUNCTION. Thank you Dr Fauci for the World Wide Pandemic .

The CCP is used their virus to get rid of Trump.
Their next virus will be used to utterly decimate Trump’s voters.

[…] defeat and replace the United States as a world power. I introduced this plan in my earlier piece here, and followed up with another piece on how China manipulates U.S. elections and investments in […]