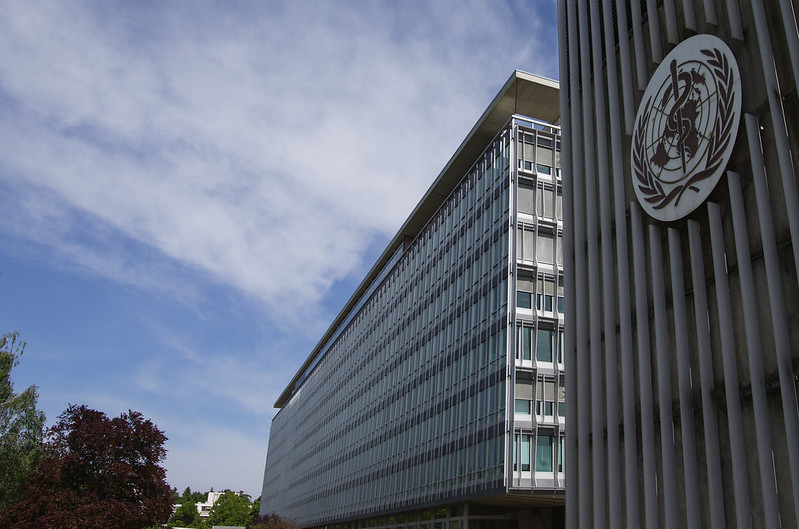 While we await publication of its official final report, a leaked draft of the joint report from the World Health Organization (WHO) and China, first reported Monday by the Associated Press, says it’s “extremely unlikely” that the coronavirus escaped from a lab, and animal transmission of COVID was most likely.

But, as the New York Post reports, “both Republicans and Democrats are slamming the report as biased because of the Chinese Communist Party-led government’s role in the investigation after party officials covered up early case data before the virus spread abroad.”

As has been widely reported throughout, the entire WHO COVID-19 origins investigation process was fraudulent and biased from start to finish. It was, according to experts, essentially a Chinese Communist Party (CCP) conducted sham inquiry handed over to, and rubber stamped by, the WHO.

Jamie Metzl, a former staffer to President Biden when he led the Senate Foreign Affairs Committee, and also formerly on the President Bill Clinton National Security Council (NSC) told CBS that it’s as if we had the Soviet Union to investigate the Chernobyl nuclear catastrophe, which also was covered up by local authorities.

It was agreed first that China would have veto power over who even got to be on the mission. WHO agreed to that. On top of that, the WHO agreed that in most instances, China would do the primary investigation and then just share its findings with these international experts. So, these international experts weren’t allowed to do their own primary investigation.

According to Metz, Chinese authorities provide the results of their own supposed investigation to the WHO committee, and that was it. That is not an investigation. That is Chinese government disinformation.

In another Tweet, Republican Representative Lee Zeldin of New York, a member of the House Foreign Affairs Committee, called the WHO “useful idiots” of the Chinese Communist Party.

Since the initial outbreak of COVID-19, the Chinese Communist Party has lied & covered-up to the world the pandemic’s origins. The World Health Organization has played along time & again as the CCP’s useful idiots. A thorough & truly independent investigation is long overdue. https://t.co/7zeXjaupmY

Meanwhile, former CDC director Robert Redfield said last week in a CNN interview that he believes the outbreak started at China’s Biosafety Level 4 (BSL-4) lab at the Wuhan Institute of Virology. He noted that:

I still think the most likely etiology of this pathogen in Wuhan was from a laboratory — you know, escaped. Other people don’t believe that. That’s fine. Science will eventually figure it out. It’s not unusual for respiratory pathogens that are being worked on in a laboratory to infect a laboratory worker.

And other experts agree that the lab theory should not be dismissed regardless of the WHO’s biased conclusions. I earlier wrote about how New York Magazine’s Intelligencer published a long piece by Nicholson Baker detailing how he believes Covid originated in a Chinese lab titled, very plainly: “The Lab-Leak Hypothesis.”

And more recently, there is the highly respected investigative reporter Allison Young, who has investigated many “shocking” and dangerous bio lab leaks that have occurred worldwide, including in the United States. In a lengthy USA Today editorial last week, she said that theories that COVID-19 may have emerged through a leak at a Wuhan lab should not be discounted.

I have uncovered exotic and deadly bacteria that have hitched rides out of high-security labs on workers’ dirty clothing, silently spreading contagion for weeks. I have revealed how spacesuit-like protective gear and tubes carrying safe oxygen to scientists have torn or broken – repeatedly – and high-tech safety systems have failed dramatically. Vials of viruses and bacteria have gone missing. Researchers bitten by infected lab animals have been allowed to move about in public — rather than being quarantined — while waiting for signs of infection to appear.

Lab accidents, Young added, are not rare at all, despite the WHO’s assertion otherwise. And as we have seen the WHO’s investigation was flawed and compromised by the Chinese Communist Party from the outset. A real investigation on the origins of COVID-19 is still needed.

I bet Fauci knows how it got to USA. After all he sent that lab lots of our taxpayer money right?

Yep — and predicted a few years before it happened that President Trump would face the greatest pandemic the world had ever seen! On video. What a fraud that man is — Mr. Falsey is my name for him!! 🙁

I think krauchi would be a good name for him because of his nazi thoughts and actions.

It WAS in the USA…but saner heads banned further research…so Fauci transferred the “research” to Wuhan and millions of taxpayer dollars to boot…to ensure completion of the “bio-weapon”…whilst the Main sewer Stream fake Media geared up to literally carry out the accompanying psychological attack on the world…and they are still attacking 24/7…or did you not notice???

I believe it escaped from a Wuhan lab – accidentally on purpose!

Mary Anne, read my blog above. It explains exactly where the Covid 19 Virus came from — the Country that keeps saying they are innocent — CHINA– and no one else!

They ARE RIGHT !!! It definitely did NOT escape….IT WAS RELEASED !!!

I was researching this terrible virus leak (by accident at first) shortly before Christmas 2020. What I was reading was scandalous and horrible. They were saying that the virus leaked out of the Wuhan Virology Lab. So I read about the Chinese lack of Quality Control in their labs and how very easy it would be for someone to leave that Lab contaminated with the Covid 19 Virus and go to the Wuhan outdoor market, infecting everything they touched.

Then on other websites I learned that Xi was having villagers dig huge pits just outside their villages in China so the government can throw the dead from Covid 19 in the pits, burn the bodies and bury it all. The World really has no idea how many thousands of Chinese citizens died from Covid BEFORE the Pandemic went world wide. Xi “buried” so much of the evidence when they threw their dead into huge pits, burned them, then buried the whole thing.

From the information reported off the web about the origin of the Covid 19 corona virus, it definitely came from the notorious Wuhan Virology Lab which was not that far from the Wuhsn outdoor market. At first they were saying the exotic bat food came from another province, but that made no difference if it was being sold in the outdoor exotic market in Wuhan because all it took was an infected employee from the Wuhan Virology Lab to touch any of the foods in the outdoor market and they would all be contaminated with Covid.

It is what it is. The CCP has been turning inside out trying to deny they were responsible for the Covid 19 Pandemic, but THEY WERE 100% RESPONSIBLE AND I WILL ALWAYS KNOW THIS TO BE TRUE BECAUSE I RESEARCHED EVERY ARTICLE I COULD FIND ON THE WEB “BEFORE” THE PANDEMIC WENT WILD. THE WHO and the CCP are STILL trying to make China look innocent when Xi, the Chinese leader, did everything he could to cover up the diseased horrific truth of China’s infecting the World!

DO NOT BELIEVE FAUCI, THE WHO, OR THE CCP’S XI. THEY ARE ALL LYING. The female Doctor who created the corona virus in the Wuhan Virology Lab mysteriously disappeared. Why do you think that happened? Yes, so no one can trace the origin of the virus to her place in the Wuhan Lab. The only reason I know about her is because of an Investigative Journalist who went to China to find her…and couldn’t find any reference to her ever working in the Wuhan Lab. The good doctor was removed from the lab and sent elsewhere, and then disappeared forever.

LISTEN UP…IT is the CHINESE GOVT Who Did a COVERUP on Their VIRUS. DO NOT TAKE OUT Your FRUSTRATIONS on ASIAN AMERICANS. THEY are NOT PUNCHING BAGS. ALL ASIANS are NOT ALIKE. MY SPIRIT Not HAPPY…AMERICAN ASIANS Being ATTACKED. I Have 1/3 of GOD’S ANGELS Under My COMMAND…Someof the Brave MEN and WOMEN Who Made it to HEAVEN are on MY TEAM. The GOOD Samurais Work for ME. GOD Has PUT HIS ENEMIES and Mine ENEMIES at MY FEET. SamuraiQueen…GOD’S ADOPTED DAUGHTER…Forever. 😄😄😄

I don’t understand why people are Surprised or Shocked by the report from the WHO, they are bought and paid for by the CCP and will do NOTHING to damage that relationship. To help the CCP Narrative along and make sure that no one questions this Communist Chinese Party’s propaganda the American media goes right along with this narrative and condemns anyone that doubts the Gospel According to the CCP.

These denials from China are outright lies – and EVERYONE knows it. This is especially true of the American president, Barack Obama, who sent this lab lots of money to do “research” on various viruses, for who knows what reasons.

A suspicious person might just look at this Corona virus event as something done on purpose, by Chinese players, to destroy the red-hot American economy established by Trump, because they knew quite well they could never keep up on the world stage. This same person might also suspect that the virus release was done with the knowledge and cooperation of Democrat Party apparatchiks who were also aware that there was no way they could keep up with Trump’s economy either. If so, these people, these Americans?, were willing to destroy the American economy so that they would stand a chance in the next presidential election. They knew they would stand no chance, whatever, with Trump’s economy going so well. And if this is true, (and many think it is), what does this say about the morality and hard-over anti Americanism of the Democrat Party? Further, what do we do about it?

The simple truth that China restricted travel from Wuhan to other places in China, but were allowed to travel internationally should tell it all. How did the virus hit every continent before the CCP admitted the danger to the world? China’s actions since the outbreak are no accident, and they remain very defiant so we need to figure out what their end-game is.