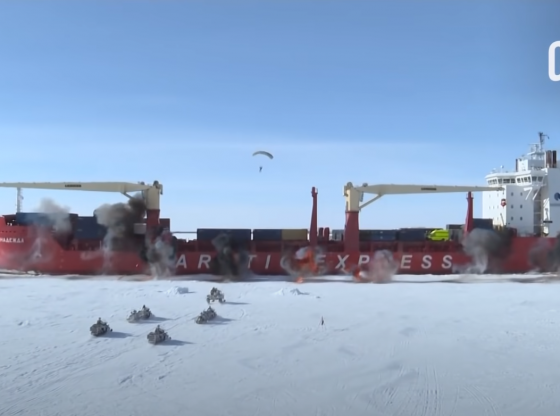 “Russia is amassing unprecedented military might in the Arctic and testing its newest weapons”https://t.co/QUXg7ZAnHv

Russia is amassing unprecedented military might in the Arctic and testing its newest weapons in a region freshly ice-free due to the climate emergency, in a bid to secure its northern coast and open up a key shipping route from Asia to Europe.

Key Russian bases in the Arctic include Alexandra Land island, Kotelny Island. Providenya, Murmansk and Wrangel Island. Though these are within Russian territory, military planners are concerned about their possible use to project power farther into the Arctic.

The bases are inside Russian territory and part of a legitimate defense of its borders and coastline. US officials have voiced concern, however, that the forces might be used to establish de facto control over areas of the Arctic that are further afield, and soon to be ice-free.

Russia is refurbishing Soviet-era airfields and radar installations, constructing new ports and search-and-rescue centers, and building up its fleet of nuclear- and conventionally-powered icebreakers.

Campbell added that Russia is “also expanding its network of air and coastal defense missile systems, thus strengthening its anti-access and area-denial capabilities over key portions of the Arctic.”

CNN reported that these northern Russian bases include underground storage facilities likely for the Poseidon 2M39 stealth nuclear torpedo and other new high-tech weapons. The Russian hardware also includes bombers and MiG31BM jets, and new radar systems close to the coast of Alaska.

However, notes CNN, “Weapons experts and Western officials have expressed particular concern about one Russian ‘super-weapon,’ the Poseidon 2M39 torpedo.”

This weapon, which is still being tested, and was initially dismissed by western analysts, now appears fearsome indeed. As CNN describes:

This unmanned stealth torpedo is powered by a nuclear reactor and intended by Russian designers to sneak past coastal defenses — like those of the US — on the seafloor.

The device is intended to deliver a warhead of multiple megatons, according to Russian officials, causing radioactive waves that would render swathes of the target coastline uninhabitable for decades.

In November, Christopher A Ford, then assistant secretary of state for International Security and Non-Proliferation, said the Poseidon is designed to “inundate U.S. coastal cities with radioactive tsunamis.”

Meanwhile as I have written here and here, this Russian Arctic build-up is being somewhat matched by NATO and U.S. troop and equipment movements. U.S. B-1B Lancer bombers are now stationed in Norway for the first time and recently completed missions in the eastern Barents Sea. Plus, U.S. and Canadian forces have increased troop deployments and training in Alaska and beyond.

Additionally, U.S. officials acknowledged last summer that the US Navy’s new Seawolf stealth submarine was patrolling the Arctic region. However, much more needs to be done to counter this growing Arctic menace.

Just a matter of time before some non woke enemy takes us over as our military is busy performing gender re-assignment surgeries…..

How is this possible? Everyone knows the ice caps are melting.

No – the polar bears are not drowning and their numbersare increasing and the PC media is pretending the warmist narrative by not going and reporting on the facts, Satellite monitoring of sea-ice started in the 70’s showing that its melting. Historical temperature records go back hundreds of years and show the situation is cyclical. Greenlands galcier is receding – but it is exposing ancient settlements that have been covered for a thousand years or more. The arctic ice melt is cyclical.
The wamist however are out to destroy any who challenge the fake “Warmist narrative”.
https://www.cfact.org/2019/10/18/polar-bear-expert-purged/

Well, from what I have rread this past year the American military is way under staffed with soldiers and equipment. We have fallen well behind our enemies that watch like China and Russia.

That is why they want to get the guns out of our homes.

Well, Y’all, these Russian fellows are definitely keeping an eye on the PRIZE!! What PRIZE you ask? Well, it’s the PRIZE that has at its “helm” a fella whose brain-housing is seriously malfunctioning, and has been for quite some time now! I mean what would you do? In the first picture in this article I saw a parachute with a paratrooper guiding it down. Should their ambitions come to fruition, you can expect a whole bunch more of those dropping into a drop zone near you! Quite possibly into the welcoming arms of the fella with the malfunctioning brain-housing group and his handlers! May God have mercy!

Canada is not really trying to use their arctic and is even blocking Mining. So if you don’t use it you lose it. And obama/Biden will reduce the US military to ensure it can happen

This is happening because hidenbiden, can’t shut that pie hole of his, u would be wise to quit trashing russia, and Putin before they send us back to the dark ages. Our frail,weak,incompetent leader is the laughing stock of the world,to our allies and foe. They are all testing our unfit,unstable,unhinged, weak leaders, that can’t figure out how to stop the invasion,crisis at our border, slo,joe created. Much less fight a war.

Amazing how the powers that be are so dedicated to destroying the world we live in! All it will take is ONE mistake or a wrong tactic to trigger destruction at the highest level.

Don’t the Russians know that there are no polar bears there because all the ice is gone?After all, John Kerry said so after a fly over in his private jet.

[…] I have noted in several pieces, here and here, Russia is massively bulking up its military presence in the Arctic. “It has reopened […]