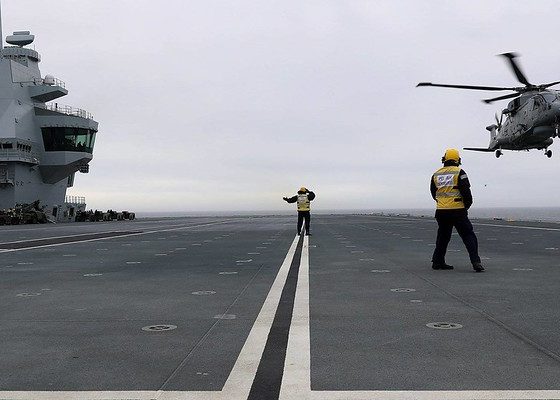 Photo of HMS Queen Elizabeth by ermaleksandr via (https://creativecommons.org/publicdomain/mark/1.0/) Flickr

According to the UK’s High Commissioner (Ambassador) to New Zealand, Laura Clarke, Britain’s new flagship aircraft carrier, the HMS Queen Elizabeth would deploy to the Indo-Pacific region later in 2021, while British coastal patrol vessels will remain to contribute to the Five Power Defense Arrangement. This defense pact includes the UK, New Zealand, Australia, Malaysia, and Singapore.

We will work closely together with other like-minded countries in responding to the systemic challenge that China poses to our security, prosperity and values, while also co-operating on shared priorities such as trade and climate change.

For those who feared that Brexit meant that the UK was turning inwards, I hope it’s clear that the opposite is the case.

Referring to the recently completed British post-Brexit review of its defense and foreign policy, Clarke said the review “paints a complex, dangerous and rather daunting picture.” Especially worrisome, noted Clarke, was the growing competition between liberal democracy and autocratic, authoritarian states.

Stuff noted that “Clarke said New Zealand was a key partner in the UK’s ‘Indo-Pacific tilt’, or renewed focus on the region, which had half the world’s population and amounted to 17.5 per cent of the UK’s trade.”

In response, Clarke said, according to Stuff, New Zealand and the UK had a “theological difference” in its view on nuclear warheads. But increasingly there were “nuclear-armed states ignoring international norms of behavior,” adding: “We believe that the best way to protect ourselves and our allies is to maintain a credible nuclear deterrent.” ADN