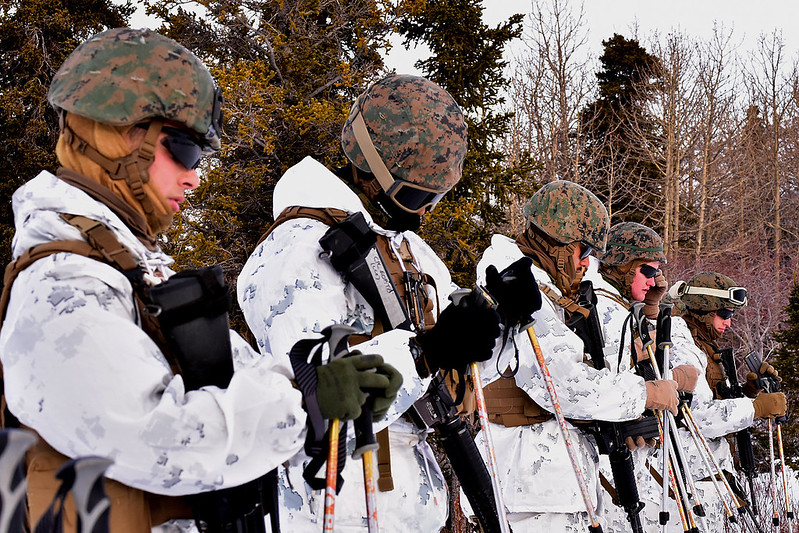 As the U.S. and its NATO allies ramp up militarily to compete with Russia, and China in the Arctic, American marines recently completed two weeks of joint training – Exercise Arctic Littoral Strike – in Northern Norway. The exercise, conducted between March 11 and 31, consisted of U.S. Marines and sailors from Marine Rotational Force – Europe (MRF-E) 21.1.

This joint training followed several weeks of specialized cold weather training by the Marines taught by their Norwegian partners intended to hone the Marines’ “ability to live, thrive, and fight in the Arctic.”

A Marine Corps press release described the unique missions practiced in the exercise. It noted that MRF-E’s Light-Armored Reconnaissance (LAR) Company observed and provided overwatch for routes that an enemy could use in the Arctic fjords to attack a Norwegian submarine, allowing the submarine to move without being impeded.

“Because of the terrain, the tactical scenario placed the Norwegian submarine in a position of vulnerability,” said Capt. Joe Tortorici, LAR company commander. “Our efforts to conduct effective over-watch were critical to the survival of not only our Marines, but also to the joint force’s ability to operate within the adversary’s weapons engagement zones. Our ability to do that in the future will ultimately enable us to integrate directly with naval assets, as we have done in this exercise with the Norwegian submarine and support larger naval campaigns.”

“This exercise demonstrated the battalion’s capability to operate inside actively contested maritime spaces, in this case arctic littoral spaces, and to provide support to joint fleet operations,” said Lt. Col. Ryan Gordinier, the MRF-E battalion commander, in the release.

“The Marine Corps has demonstrated an interest in developing expeditionary advance basing capabilities in the Pacific, and we took advantage of the opportunity to exercise those concepts in the Arctic,” Gordinier said. ADN

The could practice in north Idaho and western Montana if they want to get used to tough winter conditioning.

the alaska eskimo scouts at one time were some of the best arctic warfighter in the world, with this “devirisity” WHO KNOWS..

I was part of the arctic when I was in Alaska, and we trained for this every day. In
-40 to-50* temps, we were the ARMY troops.

I love to see planning in this action. Military might increases when the troops are prepared for the geography. This will also provide good physical training for those homeward bound discharged veterans.

I believe in the ant arctic, there are 50 million men. women and children living underground? Doing what? Something tells me the marines are going to investigate