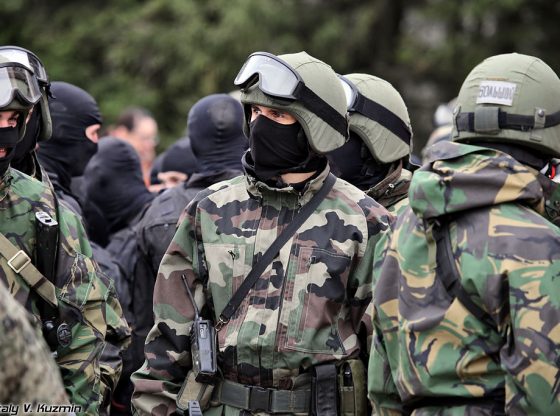 As part of Britain’s recently published Defense Command Paper, the Ministry of Defense’s (MoD’s) contribution to the Government’s Integrated Review of foreign, defense, and security policy, commandos and spooks will soon work together to counter ‘gray zone’ operations by hostile states. These states are primarily Russia and then China, and to a lesser extent North Korea and Iran.

The commandos are the elite Special Air Service (SAS) and other units in the Special Forces Group, and the spooks are Britain’s foreign Secret Intelligence Service (SIS), or MI6.

To complement the SAS in its new missions, the British army will create the new Special Operations Brigade, based around a Ranger Regiment of four battalions. These new battalions of Rangers are similar to America’s Green Berets, and will advise, and support in battle, partner forces around the globe.

Once the covert, top priority missions are completed, SAS will hand off tasks, missions, and responsibilities to a second echelon force. The new Rangers will be that force.

Writing for The Telegraph Defense Secretary Ben Wallace said that Britain must reinvent its armed forces for the 21st century as the threat it faces “has changed beyond recognition” in 30 years. He says: “Our enemies have infinitely more options. Encryption, precision, and information operations complicate the threat picture.”

“We find ourselves constantly confronted in the ‘grey zone’, that limbo land between peace and war. So, conflict prevention is more critical than ever,” Wallace added. Sir Mark Carleton-Smith, the chief of the UK general staff, explained that this is why special forces will be tasked with tackling these “hostile state actors.”

Among these hostile states Britain will be covertly confronting, Russia is considered the most pressing security concern, but China is a growing threat. In his first speech as Director General of MI5 (Britain’s domestic security service akin to the FBI), Ken McCallum said Russian intelligence services were causing “the most aggravation” to the UK.

Russia was providing “bursts of bad weather”, he said, but according to The Telegraph, warned espionage activity by Chinese spies is “changing the climate.”

The Telegraph notes that among its new priorities, “Britain’s Special Forces units will likely be tasked to uncover activity by Russian Military Intelligence (the GRU) responsible for the 2018 nerve agent attack in Salisbury that sought to assassinate double-agent Sergei Skripal. It continues:

The elite units may also be tasked with countering activity by the Wagner Group, a Russian mercenary organization [or private military company – PMC – linked to the Russian GRU] and widely thought to be acting on orders from Moscow.

The activity of the Russian private military company across Africa – particularly in Libya, Mozambique and the Central African Republic – was described to The Telegraph as “opportunistic but with a view of strategic importance” by a defence source.

“Putin has met more African leaders in the last 10 years than all of his predecessors put together,” the source said, in efforts to court votes in the UN, gain access for military forces, mineral rights and to extract money via the Wagner Group for activity including operations to rig elections.

Bugging houses and vehicles and using imagery from miniature cameras, drones and satellites, the troops will seek to uncover evidence of illegality and links to the criminal underworld.

The actions will seek to reveal and discredit Russian activity, some of which may be conducted under the guise of legitimate business or tourist activity.

I guess they will have to carry the torch as long as the Marxists who stole the USA government continue to infest it.

All smoke. China has U.K. by the balls! Antonio Guterres, Jose Angel Gurria, Jens Stoltenberg will make sure missions are of no consequence.

P.S. UK is expanding Communist Operations upon their own citizens with “COVID SWAT!”

Well, that’s just great–let the entire Communist PLANET know what they’re up to!

And so MUCH worse, they have the Joe Biden, Camel toe Harris administration to deal with!!!

But will they reveal the collusion between the Xiden/Harris administration and the CCP when that evidence is uncovered?

Yeah, fine, I suppose. But what about the hostile state the UK has become? Hostile to Western Civilization! Hadn’t they better leave a few battalions behind to deal with the troublemakers at home?

Don’t worry Biden will fix everything look at the great job he’s doing now? That’s if he knows how to put his shoes on and what day it is