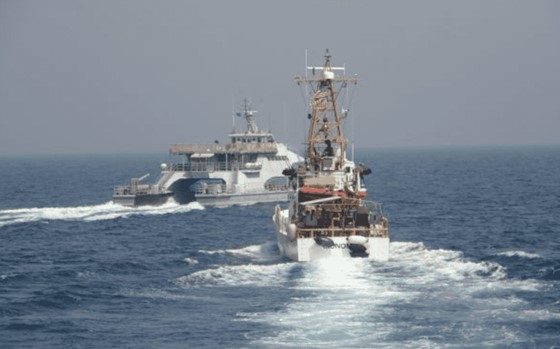 Over three weeks ago a group of three of Iran’s Islamic Revolutionary Guard Corps Navy (IRGCN) speedboats and a catamaran-style support ship, swarmed two U.S. Coast Guard (USCG) vessels operating in the Persian Gulf. The IRGCN vessels reportedly came within 70 yards of the U.S. ships. However, none of this was reported until an April 24 press release from the U.S. Naval Forces Central Command.

The Iranian catamaran-type vessel was launched in 2016 and can reportedly carry a helicopter and up to 100 personnel. The US Office of Naval Intelligence designates this ‘support’ vessel as ‘Harth 55.’ It is described as 55 meters long (180 feet) and 14 meters wide (46 feet) and has a speed of 28 knots.

Cmdr. Rebecca Rebarich, a spokeswoman for the Navy’s Fifth Fleet, told the Wall Street Journal that the Coast Guard vessels issued warnings for three hours as the Iranian speed boats buzzed past them and repeatedly crossed in front of their bows. The  press release added that: “The IRGCN’s actions were deemed unsafe and unprofessional.”

The Navy also noted that “U.S. naval forces continue to remain vigilant and are trained to act in a professional manner, while our commanding officers retain the inherent right to act in self-defense.”

Blow the bastards out of the water!

I’m sure John Kerry was clapping and celebrating for the Iranians! Traitor that he is!

Seems the best we can do is boycott Heinz products – Kerry is married to the Heinz heiress. Thus the reason he doesn’t need to earn a living.

Who cares if Joey gets any money ? That is our Coast Guardsmen in danger . Fire on them and when the Ayatolla asks what they did the can tell him ” I Ran” 🤣🤣

Time forAmerica to wake up, take them out, remove them from existence, and move on……..

I wouldn’t hesitate to destroy those evil terrorists. It’s about time they were eradicated.
I know place John Kerry in a boat adrift aiming at them full of explosives and when they got close let it blow.

Had that happened under President Trump that bunch of hoodlums would have been taken out!

Sink one and watch the other two run like mice… Ayatollah you so!

If we didn’t have a fake pResident this crap would not be happening.

Probably not. Trump was too sharp not to interpret such incidents as their efforts to estimate our efforts to protect the soft underbelly of our naval forces — one thing for certain, he would make them aware of severe consequences.to their actions should they not abandon them.

Stephen, my good man…all bets on our continued existence as a free nation are off. I served 14 yrs in the USN, proudly. If any of our shipmates would have said, 45 odd years ago…that this situation we’re in now could EVER happen…we would have dragged him to the ship’s doctor! I hope and pray that the good Lord will intervene…and SOON!

I would not be surprised to find you’re right!

What else did we expect? They tried that with Trump and finally got the message that when Trump said he was going to do something, he would do it . Now they know Biden is a blow hard and will do nothing. I’m sure more countries feel the same way. If Biden was going to do something if they sank one of our ships, he would probably forget which country did it, and attack the wrong country. Biden would probably apologize for whatever we did to make them mad and give then another plane load of money.

Or, maybe appease them with tons of money, for one — you know, a la Obama..

Biden doesn’t make decisions – he carries out those he’s told to carry out.

“You have to go out, but you don’t have to come back”
Semper Peratus!!’

Why is our Coast Guard in the Persian Gulf .. halfway around the world??? Aren’t they supposed to guard our coastal waters?

I was wondering the same thing.

The Coast Guard probably has a larger variety of missions assigned to them than any of the other branches. These units are attached to the U.S.naval forces in the Middle East fulfilling one of these missions, national defense.
While the name may be misleading, the Coast Guard has operated and continues to operate practically world wide. Not much publicity or glamor, but all vital assignments.

Are these fast boats faster than bullets?. Just asking.

They are probably faster than it takes to move the big guns to aim on target to shoot and sink them but hopefully the ships have smaller guns that move faster .

I’m not surprised.
This is what Carter and Obama allowed/invited.
This is just the beginning of the progressive democrat communist breakdown and further destruction of the USA.

Totally the result of Biden taking a soft line toward the Iranians. Keep your eyes open for some kind of iranian payoff to him and/or his family.

When is Biden going to blow hell out of these animals that Kerry sold out Israel to. Never because Biden is a patsy of irans.

TIME TO BLOW UO IRANS NAVY DOCKS AND WARE HOUSES TO STOP THIS HARASSMENT OF SHIPS IN A FREE SEA!

The Navy should have rang battle stations and then carried out live fire drill.

I wonder if they offer life insurance in Iran

Turn that falanx loose on them and be sure to video it for me.show them what a stationary puff the magic dragon can do

Use that fifty=cal and fill them boats full of led, they might get it then.

Just my thought but, I’d like if a sub. just happened to be there, loaded with a practice torpado and use them for target shoots. No big explosion, “Hey the speeding Iranian vessel ran into a submerged object and sank, no shots fired, no encounter, the damn IRGC boat was speeding an ran into something underway, they must be more careful, running full throttle out there.” Gee, just think, running like that, they could somehow just loose several of their IRGC boats, really a shame, we have tried to warm them, you must go slow in these waters, must have run into a whale or something. After the practice shoot, torpado just sinks to the bottom. Be nice if they could make several “special purpose” with no U.S. marking, nothing inside that would make some one think it was American Made, hey, we must have some old torpadoes left over from WW-II, those damn things are still floating around somewhere, hey, maybe some from the German U-boats.